Football: The stocks to watch as Super League threat fades

But as good as football clubs are at taking money off their fans – partly, of course, to support the eye-watering salaries that the players (and their agents) demand – is there an avenue for the fans to recoup some of that expenditure by investing in their favourite clubs through buying stock? 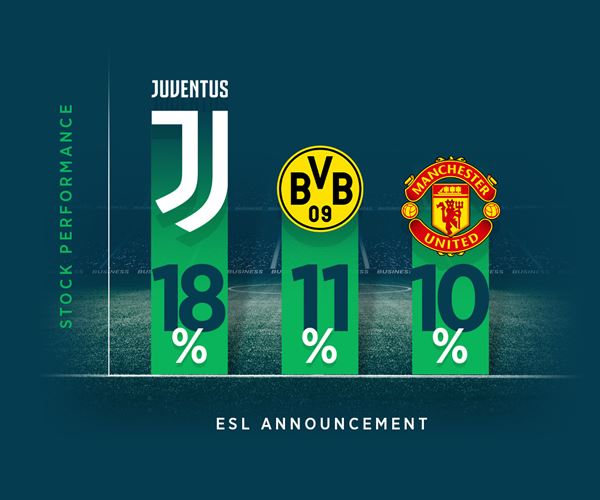 Shares in Juventus, Borussia Dortmund and Manchester United all showed impressive rises on April 19, 2021, the first full day of trading since the Super League announcement.

Two of the proposed Super League members, Manchester United and Juventus, have shares actively changing at decent volume. And there is one, Borussia Dortmund, whose allegiance appears to remain more strongly within Germany’s domestic Bundesliga.

As for the Super League, the threat has dissipated for now. But are the "big 12" still a factor going forward as they seek a bigger slice of revenue?

Malcolm Glazer launched a successful bid to take control of the club in 2005, despite strenuous objections from fans. He acquired 28.7% of Manchester United shares and pushed the market cap of the company to £800 million.

The club’s failure to qualify for the Champions League in 2019-20 as well as Covid restrictions preventing fans from coming to Old Trafford have seen the share price perform sluggishly after peaking in August 2018.

As far as the Deloitte’s Football Money League is concerned, Manchester United (€580.4m) are the only team to have secured a top-five spot in all 24 editions of the annual report.

Another thing not to be sniffed at is the club’s acumen when it comes to commercial expansion. United’s successful investments in digital marketing, such as its global mobile application, alongside ecommerce and MUTV, are building a robust future growth. The Red Devils remain the top commercial revenue generating Premier League club, totalling £282.

Finally there is the manager, Ole Gunnar Solskjaer. While perhaps not the natural successor to Sir Alex, he has brought the squad to a level where they could reasonably be expected to launch a genuine title challenge in the next few years.

The biggest of the three Italian clubs publicly traded on Milan’s Borsa Italiana, Juventus won its ninth consecutive domestic championship, and 36th overall, in 2020. Neatly, the club sometimes known as the “Old Lady” how has as many scudettos as its two fiercest rivals, Internazionale and AC Milan, put together.

The Agnelli family, owners of the Fiat automotive company, gained control of the club in 1923. Since December 2001, the team based in the city of Turn has been listed on the Borsa Italiana with the Agnellis continuing to hold a majority of the shares.

In order to reinforce its global appeal, it went the extra mile in 2018, signing Cristiano Ronaldo for £100 million, and putting him on a deal that paid him a staggering £500,000 a week.

Juve is exploring a range of commercial innovations. These include fashion brand collaborations, the J-Hotel situated adjacent to the stadium and a new arrangement with Amazon to broadcast Juventus TV on its Amazon Prime streaming platform.

Of immediate concern, however, is the team’s on-the-pitch performance. An experiment to hire Andrea Pirlo as coach has proved disastrous with Juve set to relinquish their Serie A crown, and Champions League performances have generally been underwhelming for some time.

Its new shareholders must have wondered what they had got themselves into, however, as Dortmund proceeded to decline once again. They were battling relegation for a period in the 2006-07 season before eventually rallying under their third manager of the season, Thomas Doll.

Dortmund’s next manager was Jurgen Klopp, who brought two Bundesliga titles before his high-profile move to England - but since then Dortmund has played second fiddle to Bayern Munich, Germany’s pre-eminent footballing force.

That has probably accounted for a reasonably stable share price despite a desperately disappointing 2020-21 season in the Bundesliga. Dortmund also has some fine assets in terms of young players with massive potential, such as Erling Haaland, Jude Bellingham and Jadon Sancho.


How to trade stocks at FOREX.com