Gold and silver struggle despite weak US dollar

Gold came off its earlier highs while silver turned a touch lower in what has been a quietish day so far. The US dollar fell further lower, extending it sharp losses from Friday when weak ISM data raised speculation that the Fed will be forced to cut interest rates again towards the back end of this year. But the dollar typically rises in Q1, which is something that could undermine the gold rally. In terms of the immediate term and this week, we have two key risk events that could move the dollar and thus gold prices.

Jerome Powell's speech is on Tuesday while US CPI data for December will be released on Thursday. Both of these macro events have the potential to move the dollar sharply again, after a double whammy of bearish news sent the greenback tumbling on Friday, and Monday. The weakness in wages and soft services PMI data both point to subdued economic activity, reducing the need for the Fed to hike rates aggressively to tame inflation. But will the Fed Chair acknowledge this on Tuesday, or once again talk up inflation risks? Perhaps even more important – as we have come to expect – is the publication of CPI on Thursday. But given that analysts are expecting CPI to rise by only 0.1% m/m, there is the potential for a positive surprise.

Ahead of these events, gold has now reached another major technical zone between 1878ish to 1900ish, as you can see on the daily chart of the metal: 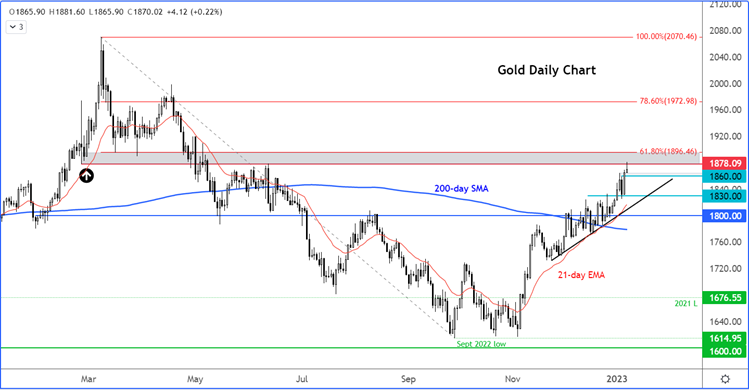 The lower end was the low created when gold rallied hard into resistance earlier in the year in 2022, which ultimately caused a massive breakdown. Now back to the same level, we could see some pullback here. The upper end of this range marks the 61.8% Fibonacci level against last year’s high, as well as being a psychological round handle. The bears would need to see some bearish price action here to confirm at least a temporary top is in as the trend has been bullish in recent months. Without such confirmation, the path of least resistance would remain to the upside. A clean break out above this zone would further excite the bulls.