NFP preview: no signs of a slowing jobs market yet!

Tomorrow brings the first jobs report of the new year, and based on recent statements from Fed policymakers, the central bank’s new year’s resolution was to redouble its focus on defeating inflation regardless of the costs. Thankfully, some of the early data suggests that the US consumer remained healthy as of December, and that optimism is keeping expectations for the labor market elevated as well.

As the graphic below shows, traders and economists are expecting to learn that the US economy created 200K net new jobs in December, and that the average hourly earnings for workers rose by 0.4% m/m, a development that would keep expectations for future price increases elevated: 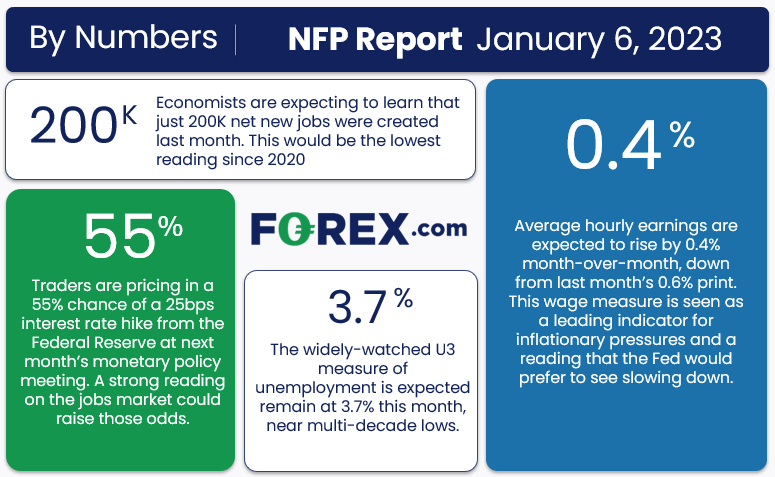 As regular readers know, we focus on four historically reliable leading indicators to help handicap each month’s NFP report, but due to the vagaries of the economic calendar, we won’t get access to the ISM Services PMI report until after the NFP report this month:

As a reminder, the state of the US labor market remains more uncertain and volatile than usual as it emerges from the unprecedented disruption of the COVID pandemic. That said, weighing the data and our internal models, the leading indicators point to an above expectations reading in this month’s NFP report, with headline job growth potentially coming in somewhere in the 200-300K range, albeit with a bigger band of uncertainty than ever given the current global backdrop.

Regardless, the month-to-month fluctuations in this report are notoriously difficult to predict, so we wouldn’t put too much stock into any forecasts (including ours). As always, the other aspects of the release, prominently including the closely-watched average hourly earnings figure which rose 0.6% m/m last month, will likely be just as important as the headline figure itself.

The US dollar index slipped slightly through slow December trade, and more to the point, has spent the last four weeks consolidating in a tight 150-pip range between 103.50 and 105.00. This leaves the near-term trend in flux, but on the bright side for traders, suggests that we could get a clear reaction to the NFP report.

In terms of potential trade setups, readers may want to consider USD/CHF buy opportunities on a strong US jobs report. In that scenario, the pair could find support off its previous lows in the 0.9200-20 range, with room to rally back toward the week’s highs in the 0.9400 before encountering any meaningful resistance.

Meanwhile, a weak jobs report could present a sell opportunity in USD/CAD. The North American pair is testing a four-week low near 1.3500 as we go to press, and a break below this key level (especially if confirmed by a strong jobs report out of Canada at the same time) could open the door for a continuation down to 1.3400 or lower heading into the weekend.