The entire developed world is approaching the proverbial light at the end of the COVID-19 pandemic tunnel, albeit at dramatically different rates. Not surprisingly, forward-looking index traders have priced in the likelihood of a strong recovery in major US and European economies, so readers watching the Dow Jones Industrial Average, the Nasdaq 100, the FTSE 100, or the DAX should keep a close eye on the economic data on both sides of the Atlantic as we move through Q2.

In a moment unprecedented in the history of economic history, everyone on the planet realized that the global economy would enter a deep recession in the same 1-week window last March. Policymakers across the developed world flipped the fiscal and monetary stimulus faucets wide open to try to soften the blow, but it was ultimately the scientists who have come riding to the rescue to limit the fallout from the COVID-19 pandemic.

Now as the world turns its eyes toward recovery, the question becomes: Which nations will recover first? Based on vaccination rates, the US and UK are running in parallel to lead the developed world, with the EU struggling to secure and distribute enough vaccinations to keep pace with their Anglo rivals. As noted above, the timeline is critical: If Europe isn’t able to vaccinate a sufficient proportion of its population ahead of the hugely-important summer/tourism season, it risks falling further behind and missing out on its share of the huge glut of savings that consumers have built up over the course of the pandemic.

According to the most recent IMF growth forecasts, issued at the end of January, the US, UK and German economies are expected to grow at the following rates in 2021:

Of course, economic growth alone isn’t the sole driver of index values, so we also wanted to look at the valuations of our four most-traded indices (all data courtesy of Eikon):

These high-level figures, not surprisingly, show that the traders are already pricing in an expected outperformance of the US economy over Europe, though based solely on these two variables, the UK’s FTSE 100 is perhaps the most attractive given its low valuation and optimistic near-term economic outlook. Below, we highlight a couple of critical themes and the key technical levels to watch on each index this quarter:

The benchmark 30-stock US index serves as the de facto “stock market” for most Americans, and by that measure, things have been going pretty well over the last year. While the DJIA has missed out on some of the most extreme winners over the past year like Tesla Motors (TSLA) and Gamestop (GME), it’s nonetheless managed to gain more than 40% over the last year alone. Looking ahead, the index remains within a healthy uptrend, with prices consistently finding support on any short-term dips toward the 50-day EMA (currently near 32,500). As long as this general technical structure remains in place, the path of least resistance for the DJIA will remain to the topside for a continued to march to new record highs.

In contrast to its stodgier US rival, the tech-laden Nasdaq 100 saw a far more impressive rally off the pandemic lows, though prices have struggled a bit to keep pace over the last couple quarters. As we go to press, the index is testing its previous record high near 13,900, and the outcome of this test could set the tone for the rest of the quarter. A clean breakout to record highs could pave the way for a “catch-up rally toward 15,000+ in short order, whereas a failure to break resistance could lead to a pullback toward the 50-day EMA near 13,000 or lower as traders rotate away from technology names and into more traditional “reopening trades.” 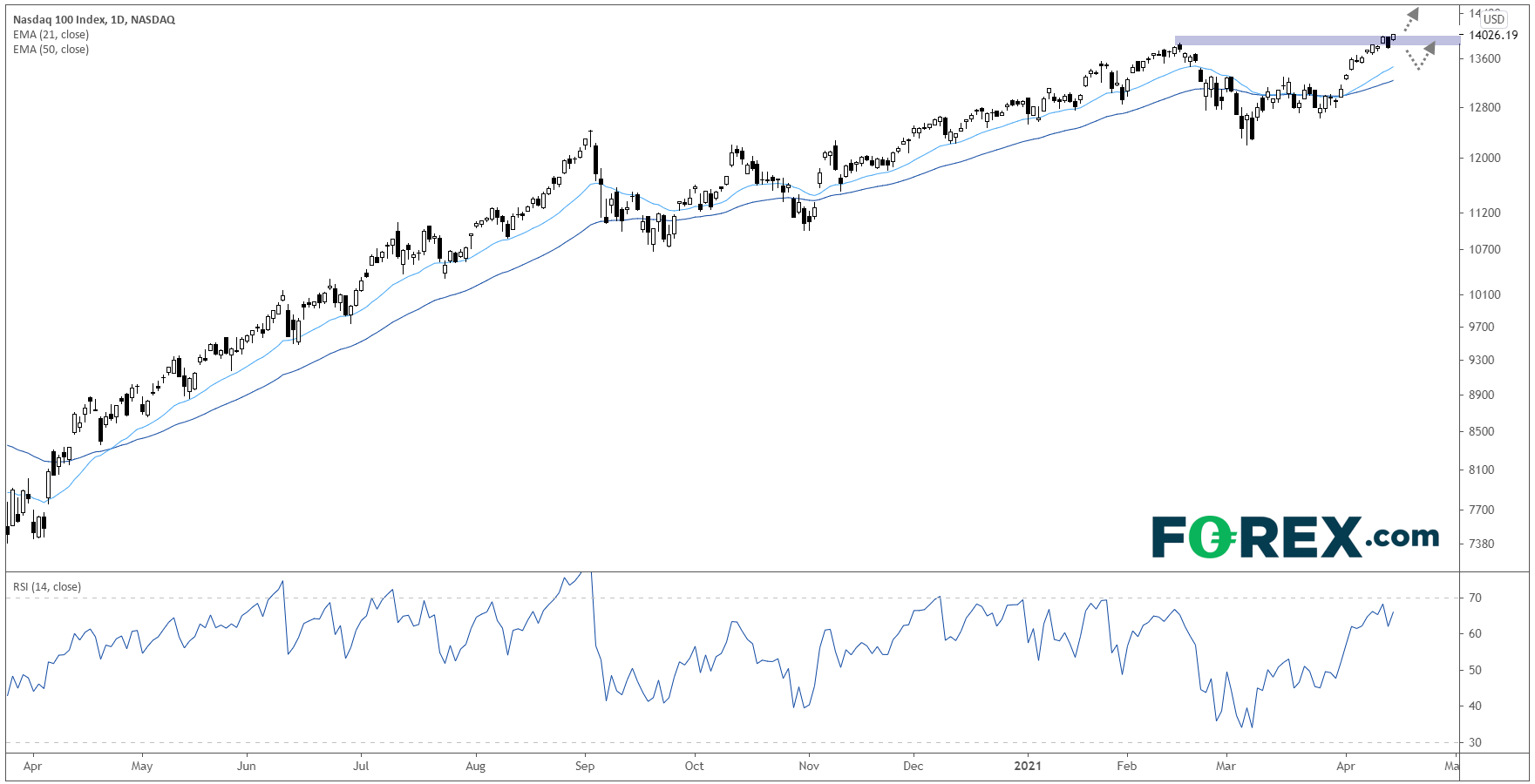 Moving across the pond, the most-traded UK index is still trading well below its all-time high, in contrast to the major US indices. That said, the price action at time of writing is noteworthy: after consolidating in the upper-6000s for all of Q1, the FTSE is finally peeking above the psychologically significant 7,000 level. To the topside, the next resistance level to watch will be previous-support-turned-resistance at 7,100 as the last hurdle before a potential retest of the record highs in the upper-7,000s. Meanwhile, the index could find support at its rising 50-day EMA, currently in the 6,750 area, on any short-term dips. A break below the year-to-date low in the 6400 would erase the medium-term bullish bias. 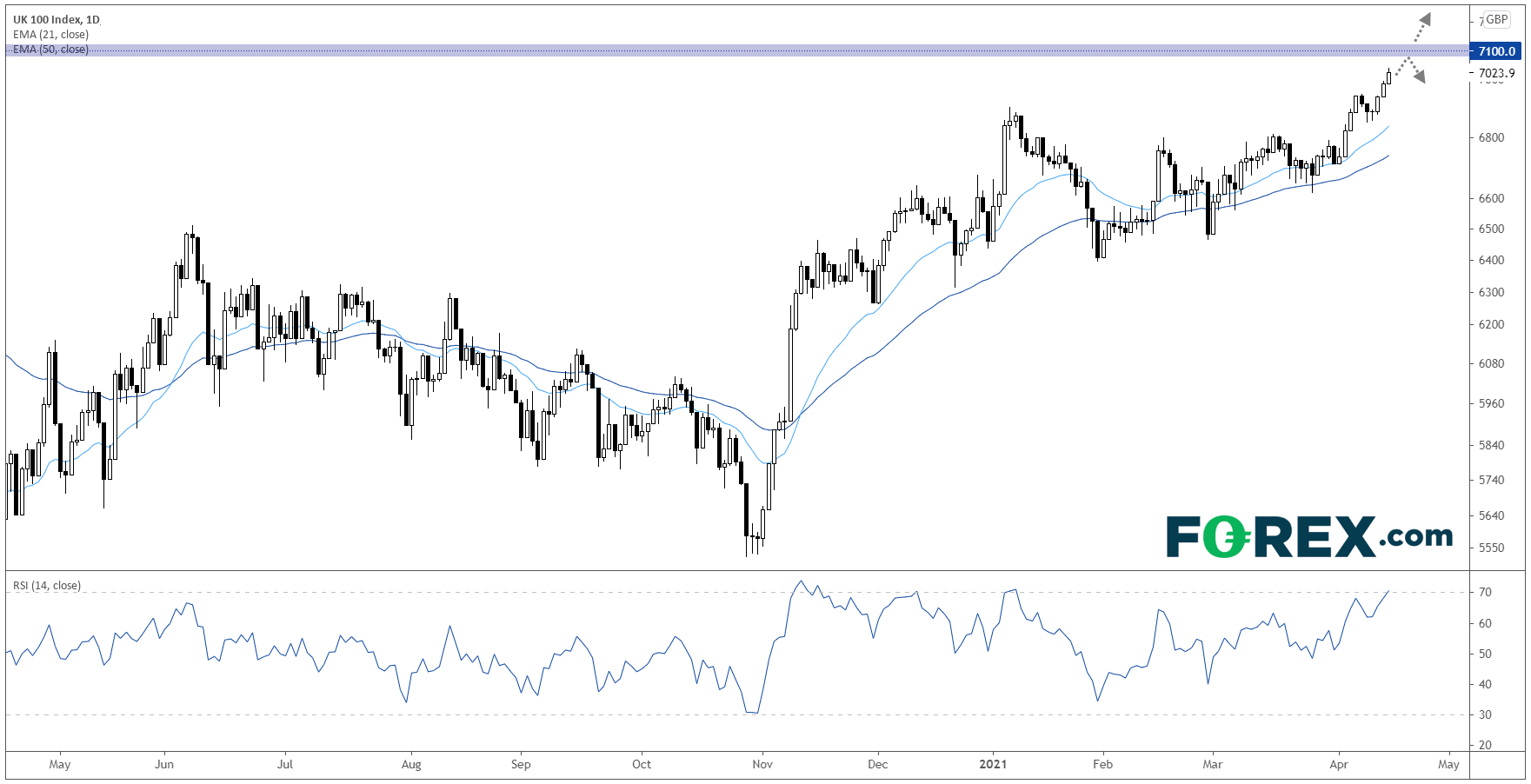 Germany’s benchmark index has seen its performance fall somewhere in the middle of its UK and US rivals: the DAX has seen an impressive nearly 50% rally over the last year to record highs, but it hasn’t quite kept up with the Dow or Nasdaq 100 over that period, perhaps due to the continent’s more tepid policy response and vaccination rollout woes. From a technical perspective, the DAX is relatively overbought at the moment, signaling that the index may be due for a near-term pause, but from a bigger picture perspective, the longer-term uptrend appears healthy, so traders may look to buy the DAX on any near-term dips below 15,000: 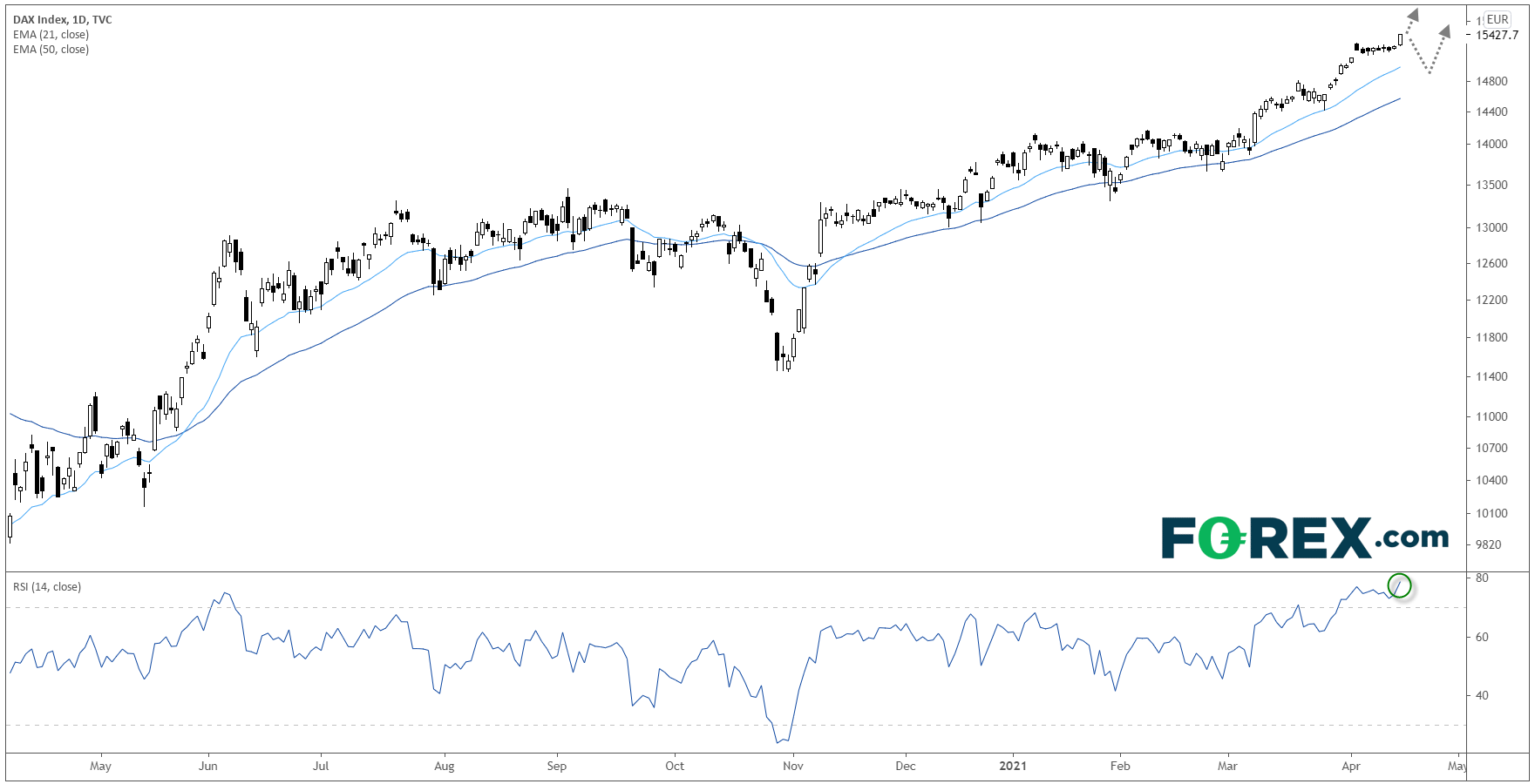