There has been quite a bit of volatility in the stocks since the S&P 500 made new all-time highs of 4744.6 on the day of the release of the Core PCE Price Index for October last week, which was 4.1% YoY vs 3.7% YoY in September.  Add to that, Omicron, a hawkish Fed Chairman, and the first cases of Omicron in the US, and stock markets are a bit worried.  And rightly so!  What are the 2 main reasons stocks have been going bid since the start of the pandemic:  Stimulus and control of the coronavirus. Well, Powell told us on Tuesday that they will discuss increasing the pace of tapering when the FOMC meets on December 15th and 16th, and the Omicron variant of the coronavirus has surfaced in nearly 20 countries so far, including the US, UK, parts of Europe, and Australia.  So, stocks are concerned! 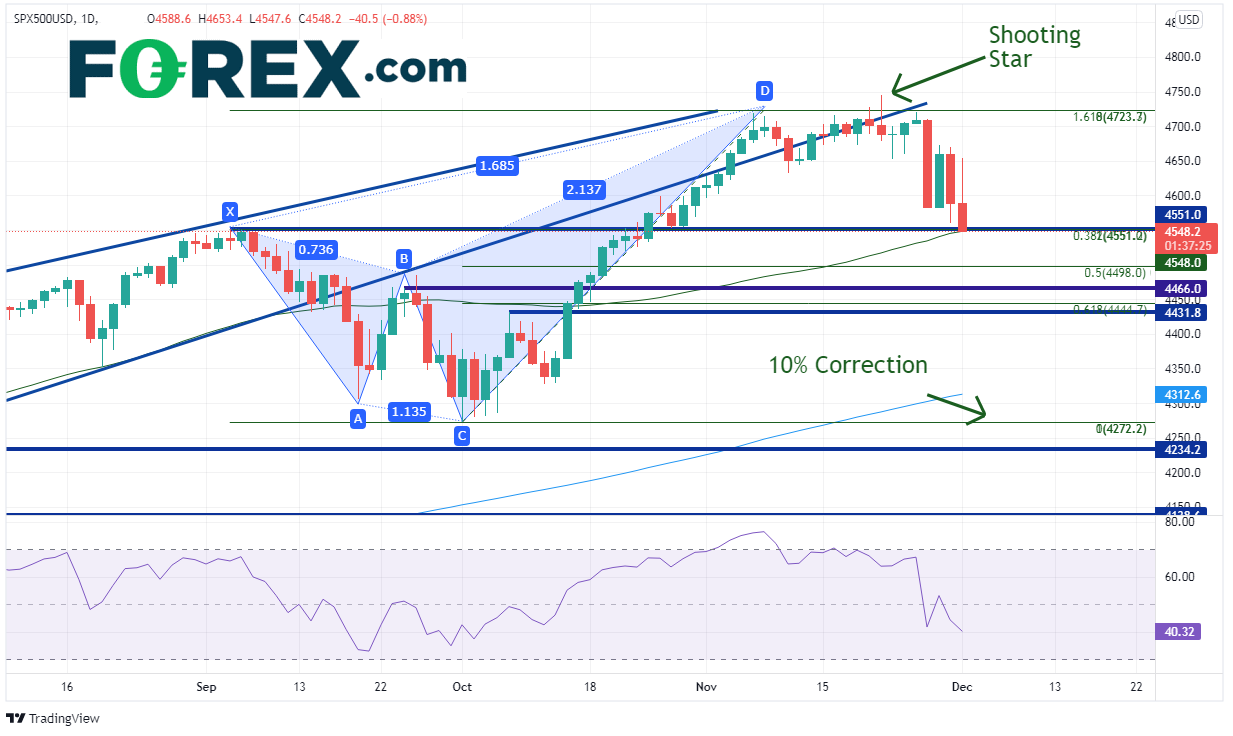 What does all that uncertainty mean for forex?  It means a flight to safety.  More specifically, it means buying Swiss Francs and Japanese Yen.  Both Switzerland and Japan are considered to own a substantial amount of foreign debt.  If the wheels fall off the cart, they can always sell these assets if needed to raise capital. Therefore, owning Swiss Francs and Japanese Yen are considered owning safe haven currencies.

GBP/JPY has been moving lower since October 21st, however the pair accelerated lower on November 4th when the Bank of England failed to raise interest rates after giving numerous signals they would do so.  The pair then consolidated in a flag formation between 152.50 and 155.75.  On November 26th, the first day the Omicron variant was “announced” by UK Health Secretary Sajid Javid, the pair broke lower out of the flag formation near the 50 Day moving Average at 153.69 and is on its way towards the flag target near 148.53. There is also horizontal support and the 50% retracement level from the January 2021 lows to the October 21st highs near that level.  If stocks continue lower (FTSE may gap lower below 7000), GBP/JPY may be near the flag target quickly. Horizontal resistance and the 200 Day Moving Average above aren’t until 152.50. 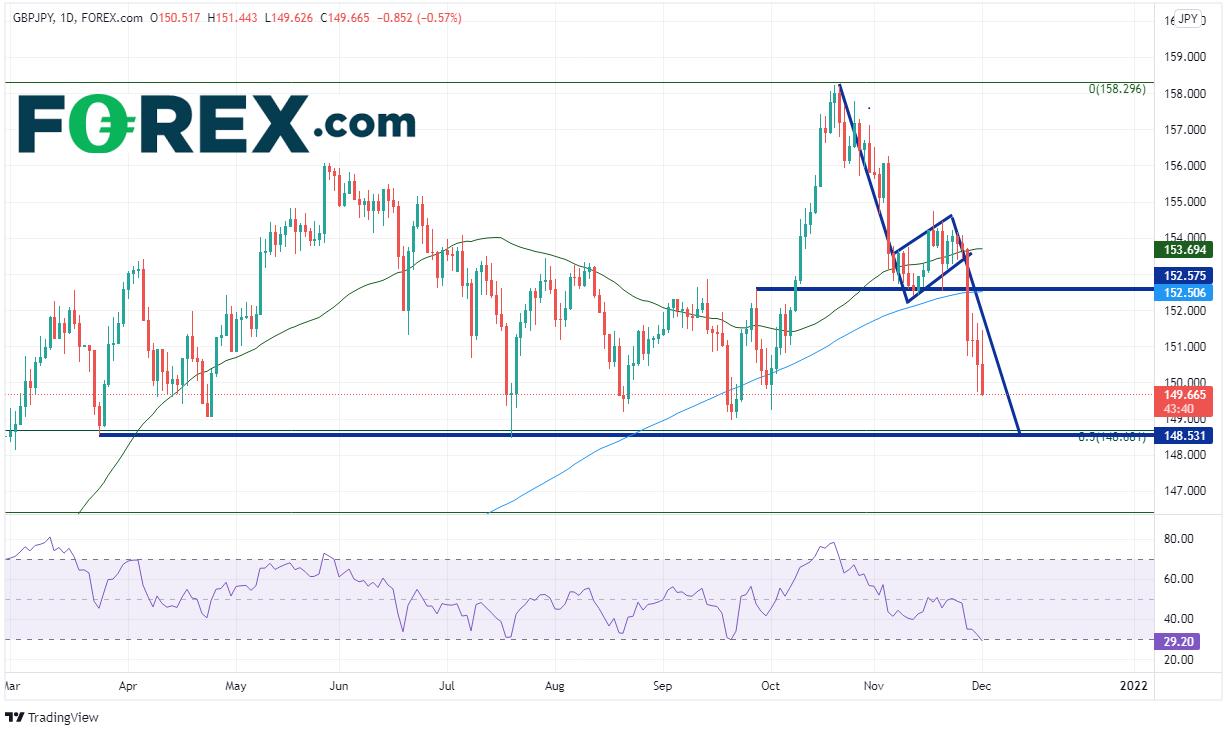 AUD/CHF is a great pair to look at when determining risk-on/risk-off.  Aussie is considered a “risky” currency, whereas the Swiss France is a “safe” currency.  If the pair if moving higher, its usually risk-on.  If it is moving lower, its usually risk-off.  AUD/CHF has also been moving lower since late October after forming a ‘funny looking” head and shoulders pattern from the lows on August 20th near 0.6513. Price moved higher and spiked through the 200 Day Moving Average several times near 0.6925, forming the Head of the pattern.  As price moved lower, AUD/CHF traded between the 50 Day Moving Average at 0.6700 and the neckline of the pattern at 0.6800.  The reason this is a “funny looking” Head and Shoulders pattern is because the right shoulder is much shorter in duration than the left shoulder.  However, on November 26th, AUD/CHF broke aggressively lower through the neckline of 0.6710 and is nearing its target at horizontal support of 0.6646.  The only level in its way is August 20th low! 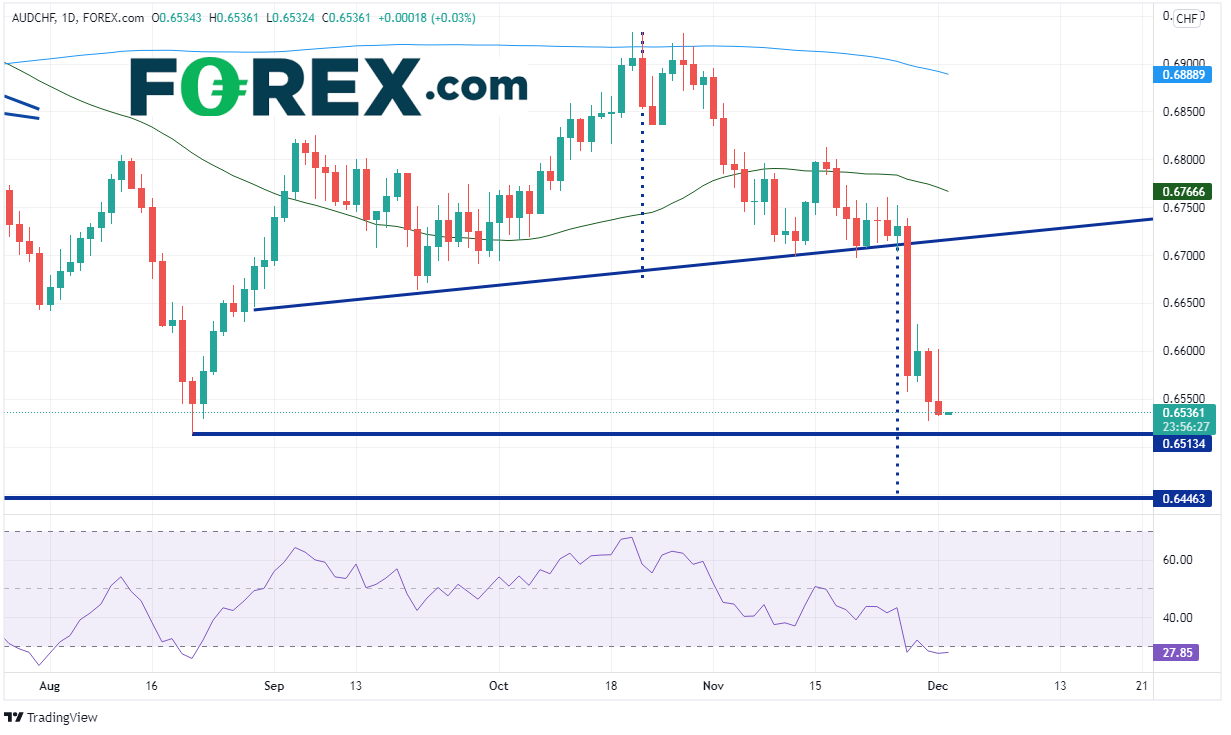 The Swiss Franc and the Japanese Yen are considered safe haven currencies.  When there is risk-off in stocks, there tends to be a flight to safety into them.  Watch these currencies to help determine risk-on and risk-off moves.