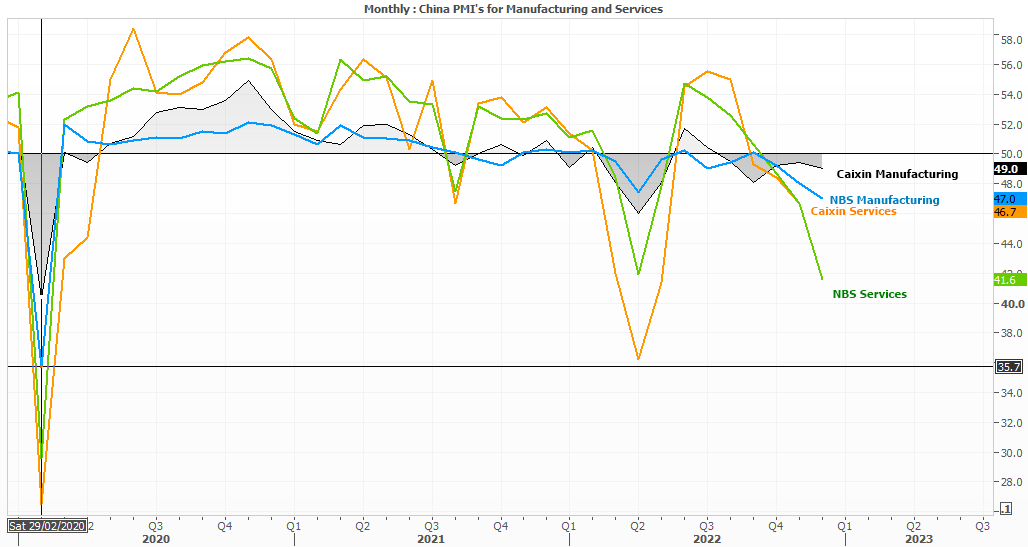 We had a risk-off tone today across currency and equity markets as the latest round of PMI data weighed on sentiment and benefitted then yen. China’s manufacturing PMI contracted at its fastest pace since February 2020 according to official data from NBS (National Bureau of Statistics). Non-manufacturing (services) PMI sank to 41.6 which dragged the composite down to 42.6. And earlier today a privately held report by Caixin also saw manufacturing contract for a sixth month, although not at such a drastic rate at 49. Still, with all measures of PMI for Chine now negative it further cements expectations of weaker global growth and has helped the yen gain safe-haven flows. Yet hopes that the BOJ are closer to exiting negative rates also bolstered the yen.

Back on December the 20th, the Bank of Japan (BOJ) surprised markets by doubling the target range for the 10-year JGB, from +/- 0.25% to +/- 0.5%. The move was seen by markets as a significant step closer to the BOJ moving away from their ultra-loose monetary policy stance, which resulted in significant buying of the Japanese yen and selling local equities.

For comparison, many JPY pairs saw their largest daily loss since Brexit in 2016 with AUD/JPY, NZD/JPY and GBP/JPY all falling over 5% by the lows of the day. And whilst prices did retrace as we headed into the year end (which reeks of month/quarter/year-end flows), we’ve since seen the yen once again bid as we head into the new year. Low liquidity and a slight risk-off tone to equities across Asia are also contributing factors to yen strength.

The BOJ governor Kuroda has since dismissed claims that the central bank is moving away form their ultra-easy policy, but with inflation nearly twice their 2% target at 3.8% and Kuroda’s expectations of higher wages, few believe him. Furthermore, Japan’s PM has announced his desire for more flexibility for the 2% inflation target, (which signals they expect inflation to remain higher for longer) which further bolsters the case for interest rates to move back into the positive territory. I expect more denial from the BOJ in due course, as evidenced by the stronger yen. 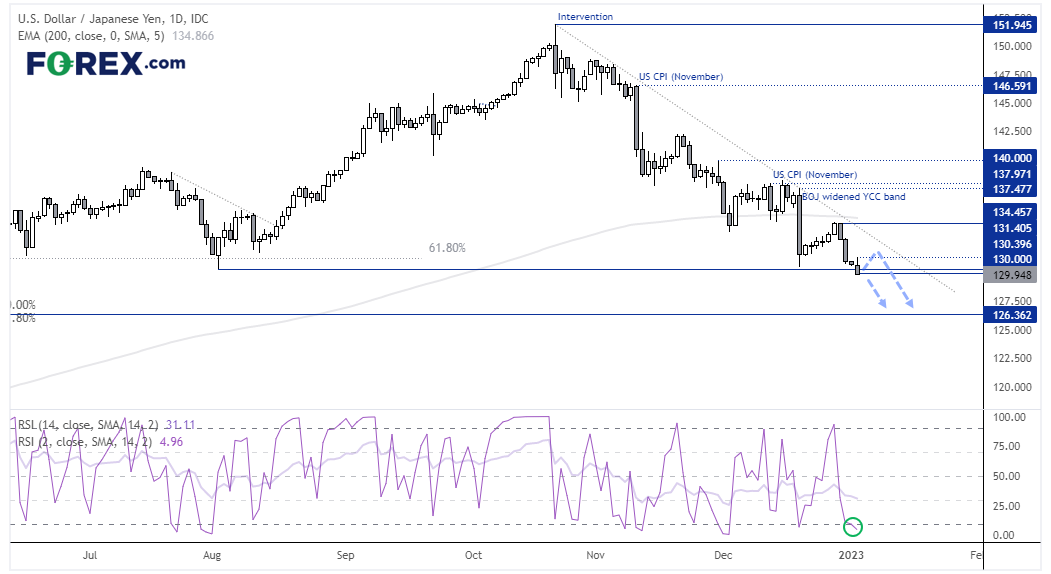 USD/JPY traded briefly below 130 today as it touched its lowest level since June. The trend is clearly lower on the daily chart, with the year-end pullback holding beneath the 200-day EMA. The pair is on track for a bearish outside day, although if it were to close back above the 130.39 low then it raises the prospects of a false break (and retracement higher). Also take note that the RSI (2) is oversold, so bears may want to remain nimble and stick to intraday timeframes over the near-term. If prices do retrace then it would be a welcomed opportunity to fade into any minor rally for an anticipated move down to 128 and 126.40.

The FOMC minutes for the December meeting are released on Wednesday, and whilst I doubt it will pack as much of a punch than the meeting – any further clues of a lower terminal rate could weigh on USD/JPY. 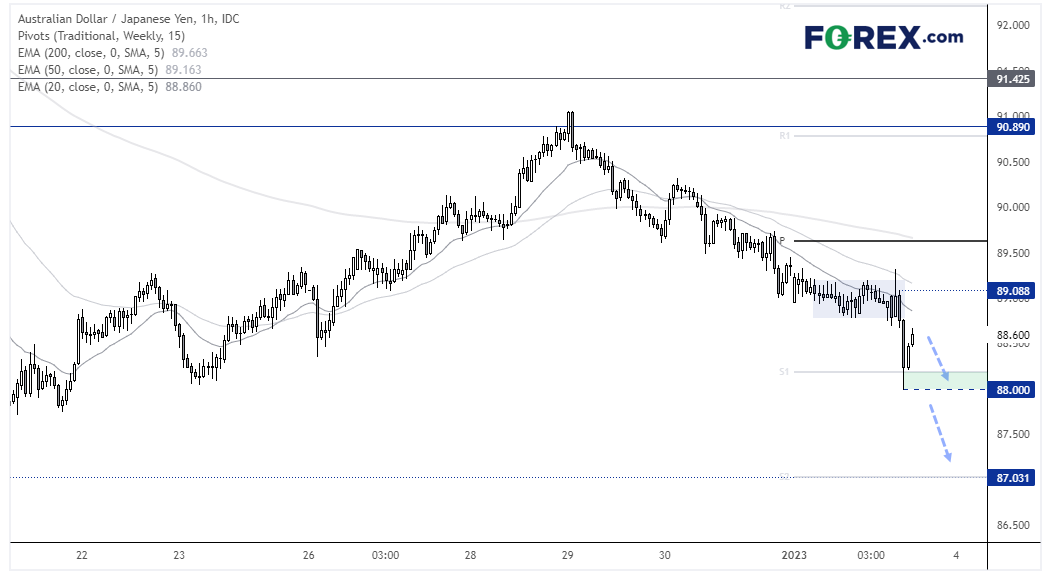 AUD/JPY tracked equity futures lower but has since retraced against those earlier losses. The 1-hour chart shows that it tried to break beneath the weekly S1 pivot before closing on it, and has spent the last couple of hours trying to head back to 89.0. However, this could be an opportunity for bears to reload ahead of the European session and seek a break below 88. The bias remains bearish below 89.10 and for a move down to 87.