Games Workshop said it delivered solid progress in the six months to November 29 as sales and profits continued to grow.

The company, which makes and sells miniature war figurines, said revenue in the period rose to £186.8 million from £148.4 million the year before, with pretax profit jumping to £91.6 million from £58.6 million.

That beat expectations. In December, it said it would deliver interim sales of £185 million and a pretax profit of £90 million.

While sales in its own stores have been hit by lockdowns, the company reported strong growth from its trade channel, up 33%, and in online sales, up 87%. Its overall gross margin also improved 6% to 75%.

Games Workshop said the dividend had been cut 80p from 100p, but that excludes the additional 60p payment declared in December.

‘I'm mindful of the uncertainty caused by Covid-19 and Brexit. Like every other company we have our internal plans as to our future performance, which show a range of outcomes which are not shared with the stock market: predicting the future is always a risky business. To help inform shareholders and followers of Games Workshop as best we can we will continue to provide regular updates of our trading in each current year (much as we do already),’ the company said.

The positive update did not prevent Games Workshop shares sliding heavily in early trade, down 6.6% to be the worst performer in the FTSE 250. Shares have rallied over 25% since late November and hit a new closing high last week, possibly prompting investors to cash-in some profits.

This surge puts today’s -6.5% decline on the open into perspective. The move lower does however take the Games Workshop share price through its 20 & 50 sma, a now bearish chart.

The RSI is also in bearish territory, falling below 50 at 33. However, it hasn’t moved into oversold territory, which would normally suggest that there is more downside to be had. However, looking at GAW the RSI rarely breaches 30, often picking up ahead of the oversold level.

Immediate support can be seen at today’s low of 10680 a level last seen 3 week ago. A break below here could see the sell off deep to 10430 the 200 sma. A break below this level could see more bears jump in. 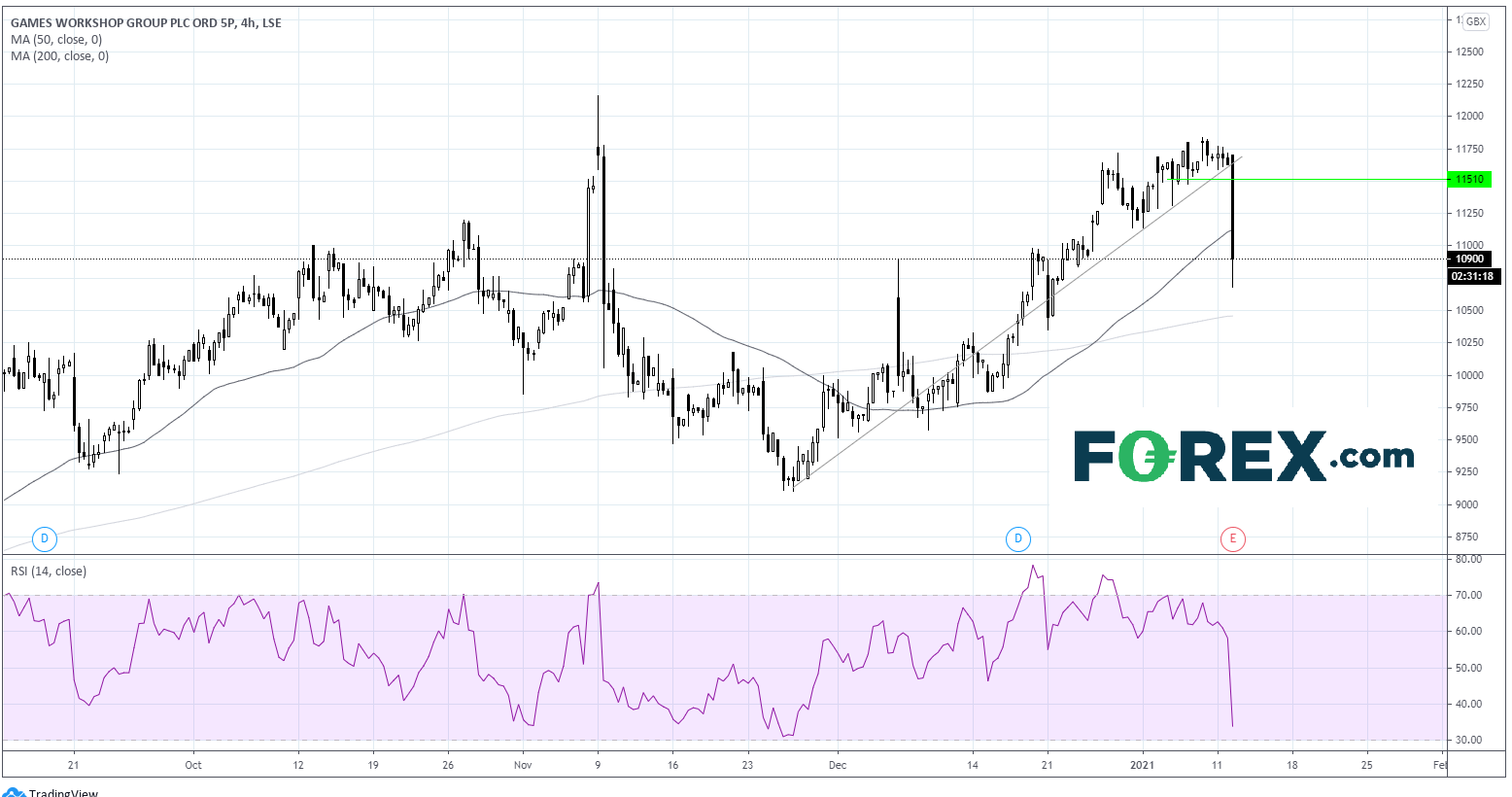 Kingfisher said sales have continued to grow as the company, which owns home improvement brands including B&Q and Screwfix, has been able to remain open as an essential retailer and people have done-up their homes during lockdown.

The company said like-for-like sales were up 16.9% over the period between the start of the fourth quarter and January 9, accelerating from the 12.6% growth reported to November 14. For further comparison, LfL sales rose 17.4% in the third quarter.

Kingfisher said LfL sales for the financial year so far (between February 1 and January 9) are up 6.5%, and it expects to deliver an annual adjusted pretax profit at ‘the top end’ of the £667 million to £742 million range expected by the market.

Kingfisher said it cannot provide sales guidance for the new financial year that will end at the start of February 2022 because of the pandemic but said that it intends to make £85 million in one-off cost savings after booking around £45 million of COVID-19 related costs.

It will release its annual results on March 22.

Land Securities collects fraction of rent due from retailers

Rent from offices held up, with 96% of rent due for the quarter already paid.

The pandemic has put strain on many retailer’s ability to pay their rent and overheads, but LandSec has also provided support by deferring payments and establishing an £80 million customer support fund.

Chemicals giant Johnson Matthey said it has appointed Stephen Oxley as its new chief financial officer from the start of April. He is joining from KPMG, where he is a partner and has worked with a number of blue-chip companies, including Johnson Matthey.

He will take over from interim CFO Karen Hayzen-Smith, who will return to her role as group financial controller.

Playtech said it expects to beat expectations when it releases its annual 2020 results on March 11.

The company, which supplies software to online gaming and bookmaker sites, said adjusted earnings before interest, tax, depreciation and amortisation will be ‘at least’ EUR300 million in 2020. It said that would be ahead of market expectations but it will still be markedly lower than the EUR383 million profit delivered in 2019.

Housebuilder Vistry Group said it intends to pay a ‘modest’ dividend when it releases its annual 2020 results on February 25.

The company, formerly known as Bovis Homes, said it had delivered a strong performance in the second half of the year and that annual pretax profit should be at the top end of the current range expected by the market, at around £140 million.

It said it expects pretax profit to ‘step-up’ and more than double in 2021 to £310 million, ‘assuming stable market conditions’.

‘I am delighted to report a net cash position of £38 million as at 31 December 2020, reflecting our strong second half performance and firm focus on cash management.  Given the robust balance sheet position, the board now expects to resume dividend payments with a modest final dividend in respect of 2020,’ said CEO Greg Fitzgerald.

Vistry shares were broadly flat in early trade at 954.3p.

XP Power to beat expectations thanks to healthcare industry

XP Power said it had a ‘strong finish’ to 2020 and that it expects to beat expectations for the year thanks to ‘exceptional’ demand from the healthcare industry.

The company, which makes critical power control components for the electronics industry, said revenue for the year should be in line with expectations and up 16% year-on-year, but that profits will be better than forecast as increased demand allowed it to improve efficiency and margins.

Revenue was up 25% in the final three months of the year, slightly down from the peak seen in the third quarter.

‘Order intake for the fourth quarter was positive and the group is performing well, despite the challenges created by COVID-19, and we therefore expect further underlying revenue growth in 2021. Longer term, the group remains well positioned to continue to deliver growth,’ XP Power said.

XP Power said it intends to pay a dividend of at least 34p per share when it releases its full year results, taking the total payout for the year to a minimum of 72p.

XP Power shares were flat in early trade at 5090p.

Production in the fourth quarter was 22% higher than the third after it ramped-up its concentrator expansion project.

It said it has continued to suffer minimal disruption from the pandemic and ended the year with net cash of $4 million. That is a significant improvement from the position it found itself in at the end of 2019, when it had net debt of $282 million.

Vectura gets a boost from Advair approval

Vectura said it expects to beat its target for revenue and adjusted earnings in 2020.

‘I am pleased to report that the business has performed well during 2020, trading ahead of board expectations following FDA approval in December 2020 of our generic Advair programme, partnered with Hikma.  The business has also proven resilient in the face of wider challenges posed by the coronavirus outbreak,’ said CEO Will Downie.

The company also said its strategy of becoming a leader in the inhalation CDMO market will see revenue from the sector triple in 2021 compared to 2020.

Derwent London said rental collection rates improved in December, mainly thanks to the resilience of the office sector.

Unlike other major landlords, Derwent London makes 91% of its revenue from offices. It said it has now collected 83% of the total rent due for the December quarter and 87% of its total office rent.

‘These collection rates are higher than the June and September 2020 quarters at an equivalent time.  Rent has continued to be received in relation to earlier quarters, with September rent collected now 92% compared with 80% when first announced on 13 October 2020, plus an additional 5% still to be received from agreed payment plans,’ Derwent London said.

LondonMetric said it has bought two urban logistics warehouses for £39 million, one in Manchester and one in Birmingham. The warehouses are newly-built and are let for 15 years at an average rent of £6.60 per square foot with RPI-linked rent reviews in place.

The blended yield on the cost of the acquisitions is 4.25%.

Grafton Group said revenue in 2020 will be down more than 6% as a stronger end to the year failed to offset the disruption suffered in the second quarter when the initial lockdown was implemented.

The company, which supplies building materials and runs DIY stores, said revenue and profitability was better-than-expected in the last two months of 2020, but that annual revenue will be down 6.1% year-on-year at £2.51 billion.

Still, the company said it now expects adjusted operating profit to be 5% higher than the £174 million currently forecast thanks to the stronger performance toward the end of the year.

Engineering outfit Wood Group said it has won a $120 million contract from Sinopec to provide engineering, procurement and construction (EPC) services as the Chinese firm expands its refinery in the south of the country.