Genus said profit for the full year should be better than expected after delivering a strong performance in the first half.

The animal genetics company said it had seen high growth in volumes and profit in both its PIC porcine genetics and ABS bovine genetics units. ‘Business trends are consistent with those previously announced at the time of the AGM, including further strong growth achieved in particular by PIC in China and by ABS in Brazil, Russia, India and China,’ Genus said.

Genus warned that the coronavirus had become more prevalent since its last update, which will cause ‘some challenges’ for its customers. It expects the second half to be weaker than the first, but Genus believes it has already got the momentum needed to beat expectations over the 12 months to the end of June 2021.

Genus shares jumped over 2% on the open hitting a fresh all time high of 4556.

The share price has been steadily climbing from its March low, with a notable steepening of the uptrend seen from early September.

Genus share price trades above its 20 and 50 sma on the daily chart and its ascending trendline dating back to early September.

The 20 sma has also crossed above the 50 sma in a bullish crossover signal. The RSI is also supportive of further gains as it continues to trend higher in bullish territory but not over bought.

On the flip side, immediate strong support is seen around 4250, the 20 sma ahead of 4225 the ascending trendline support and 50 sma. A break below here could negate the current bullish trend and open the door to around 3900 December’s low. 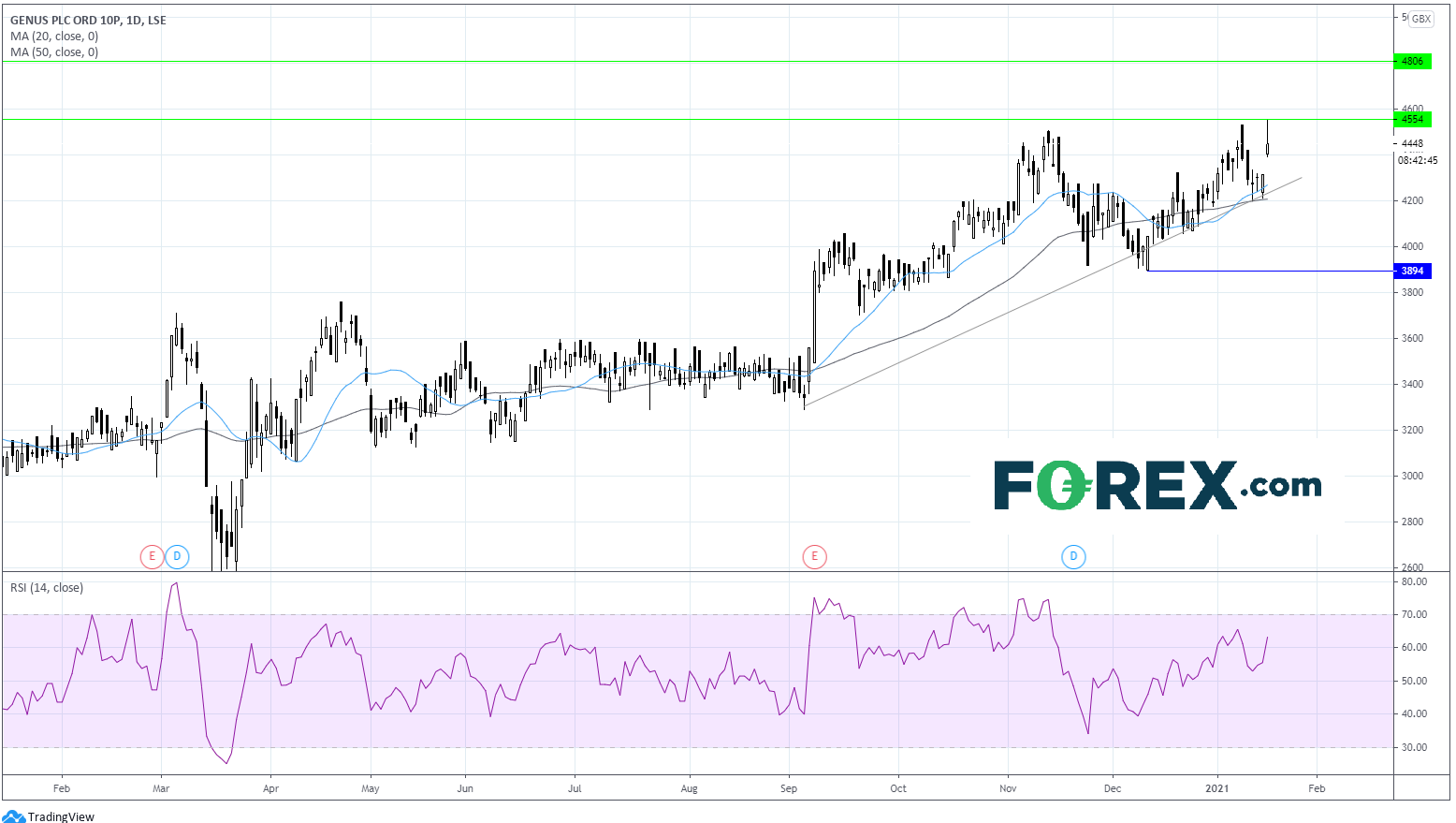 AstraZeneca gets landmark approval for Enhertu

AstraZeneca said Enhertu has been given the green light by US regulators to treat patients with advanced gastric cancer.

Enhertu will be used to treat patients with locally advanced or metastatic HER2-positive gastric or gastroesophageal junction adenocarcinoma who have previously been treated with a trastuzumab-based regimen.

The pharmaceutical giant said it was the first ‘HER2-directed medicine approved for patients with gastric cancer in a decade’. Around one in five gastric cancers are HER2 positive.

‘Patients with metastatic HER2-positive gastric cancer with progression following 1st-line treatment have historically faced poor outcomes, including low response to treatment and rapid disease progression. This approval represents the first time a HER2-directed medicine has demonstrated a significant improvement in survival compared to chemotherapy following initial treatment in the metastatic setting, and it has the potential to become the new standard of care for this patient population,’ said Ronan Kelly, the firector of Charles A Sammons Cancer Center and the chair of immunology at Baylor University Medical Center.

Enhertu has been developed with Daiichi Sankyo and AstraZeneca will pay $115 million to its partner now that they have secured approval in the US. The pair entered into a global collaboration to advance Enhertu back in 2019.

Centrica said chief financial officer Johnathan Ford has resigned for personal reasons and will leave the company on January 31, when Kate Ringrose will takeover.

Ringrose has been with Centrica, which owns the likes of British Gas and Hive, for 16 years and is being promoted from group financial controller.

‘I am very sorry to see Johnathan leave and would like to thank him for his contribution to the Company and wish him and his family well for the future. However, I am delighted that we have a very capable internal successor in Kate, who brings a wealth of experience from a wide range of finance roles across Centrica. I look forward to working closely with Kate as we continue to focus on delivering the turnaround of Centrica,’ said chief executive Chris O’Shea.

Spirent Communications said it expects revenue and profits to grow in 2020 as its customers continue to invest in 5G despite the disruption being caused by the pandemic.

‘We have successfully managed through a difficult environment in 2020 and I am delighted we are making strong progress with our strategic agenda. We delivered another year of revenue and earnings growth and, although we experienced some softness in the latter half of the year due to timing of expenditure by global service providers, the 5G-driven momentum in our Lifecycle Service Assurance business continues to be strong,’ said chief executive Eric Updyke.

The company said it had continued to be highly cash generative and has $241 million in cash.

‘Ahead of announcing the preliminary results of the group, and in line with its existing policy, the board intends to review the group's cash position in light of the outlook, investment opportunities, and other factors. To the extent the board determines that the group has excess cash, the board will look to return it to shareholders,’ Spirent said.

PureTech announced this morning that Vor Biopharma has filed for an initial public offering (IPO) with the US Securities & Exchange Commission.

The size and value of the offer has not yet been decided and any listing is subject to market conditions. Goldman Sachs is acting as lead bookrunner for the offering.

Vor is a cell therapy company that focuses on providing treatments for haematological malignancies. It was founded by PureTech and today the London-listed company owns an 11.8% stake, according to its website.

Property investor LXI REIT said it will pay a larger dividend after receiving almost all the rent due for the first quarter of 2021.

LXI said it had collected 96% of all rent for the three months to the end of March and said this rises to 98% once rent deferrals are taken into account. It said it now intends to pay a dividend of 1.46p for the quarter. It was targeting a 1.44p dividend previously.