AO World’s chief executive John Roberts said the company has ‘seen ten years of change in ten months’ as people shift their shopping online during the pandemic, allowing the company to post record trading figures over the last three months of 2020.

The company, which sells electronics online, said it experienced its ‘strongest ever peak trading period over the Black Friday period and in the run up to Christmas’, with quarterly UK revenue up 67.2% to £457.3 million and sales in Germany up 77.4% at EUR73.6 million.

Roberts also revealed that its German business was ‘profitable throughout the third quarter’ and described it as ‘one of our biggest achievements’.

Still, AO World warned it has incurred higher costs as a result of the coronavirus, prompting it to invest in its warehouses and staff, which will weigh on its ability to translate topline growth to the bottom. It also warned that it had seen a ‘slightly increased rate’ of cancellations for mobile contracts and warranties as a result of the pandemic.

‘We look forward to the last quarter and the next financial year with confidence as the structural shift to online is cemented in consumers' minds by the outstanding service millions of new customers have received in 2020.  This is compounded by the ongoing tailwinds we expect to be driven by working from home and associated usage and appreciation of electrical products so essential to our day to day lives,’ it said.

AO World shares were trading down 6.5% in early trade. AO’s share price has put in a steady recovery over the past 9 months, picking up from pandemic lows. However, the price has traded within a tight range of 100p -a horizontal channel since November, limited on the upside by 440 and 335 capping the downside.

Today’s selloff has seen the price drop through its 20 and 50 sma, a bearish move. The RSI is also in bearish territory below 50 but above the 30 oversold level.

However, the selloff has been capped by the lower band of the horizontal channel at around 335p suggesting weakness in the price below this level. A break below 335p is needed in order for a deeper selloff to 300p. 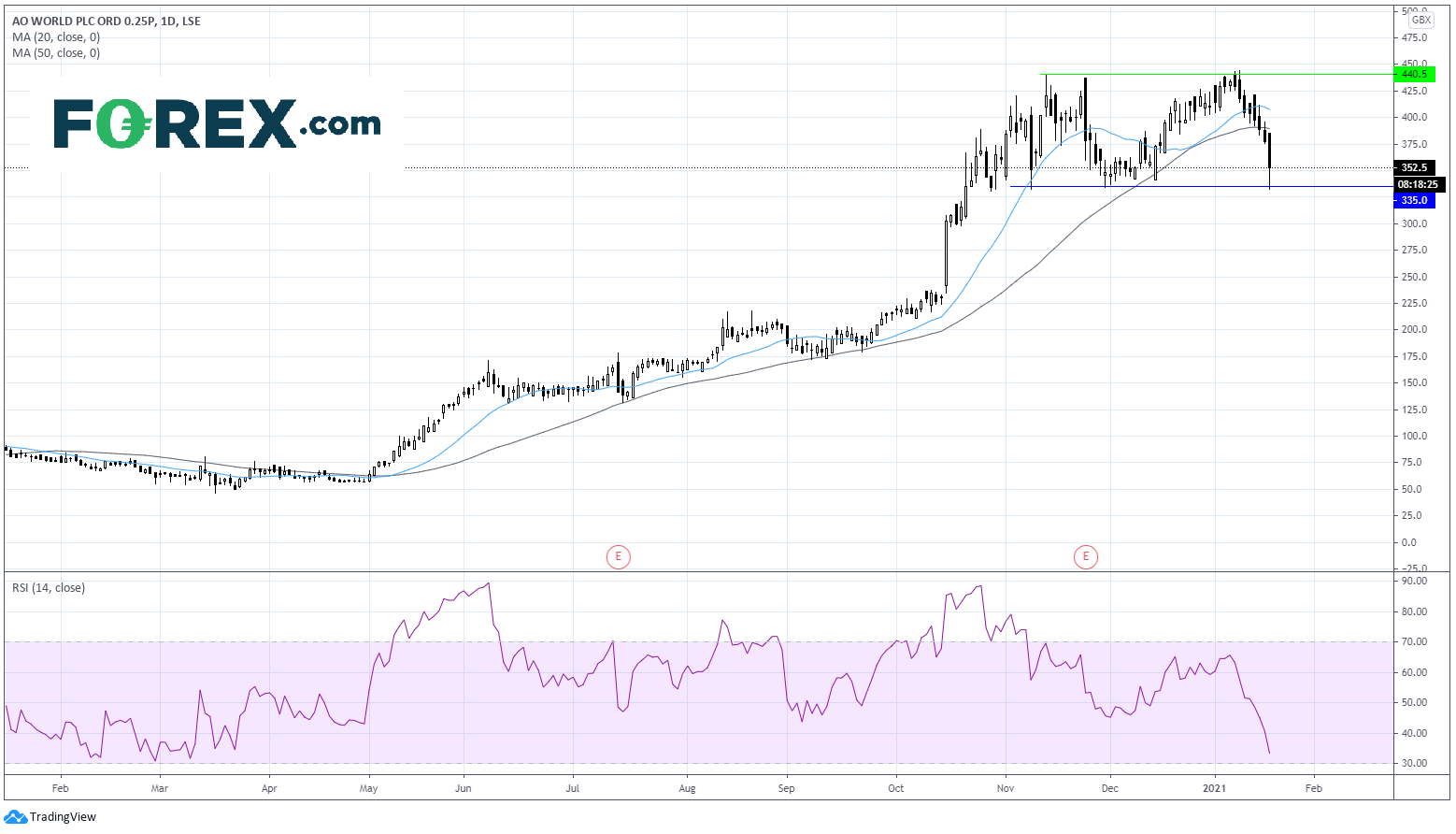 British Land said Bhavesh Mistry will become its new chief financial officer from the start of August. The company, which builds and manages a variety of properties, said Mistry will be joining from his current role as deputy CFO at supermarket Tesco. Previously, Mistry has held finance roles at Whitbread, Virgin Media and AB InBev.

Interim CFO David Walker will remain in his tole until Mistry joins.

‘I am delighted Bhavesh is joining British Land at this important time for our business.  His deep expertise in finance and wealth of experience in business transformation in fast moving industries will be invaluable as we continue to move our business forward and deliver against our strategic priorities,’ said British Land chief executive Simon Carter.

BAT gets new director of operations

British American Tobacco said its group head of new categories operations, Zafar Khan, will join the board next month and replace director of operations Alan Davy.

Khan started his career with BAT in Pakistan 24 years ago and he has held numerous roles for the company around the world, including as regional operations director for Asia Pacific and the Middle East and the group head of plan, services and logistics.

‘BAT has around 13 million consumers of our non-combustible products and Zafar's experience of expanding our capabilities and embedding an end-to-end supply chain for our New Category products makes him the natural choice as Director, Operations to accelerate the delivery of our A Better Tomorrow strategy,’ said chief executive Jack Bowles.

Experian said it performed better than expected in the third quarter of its financial year, driven by its operations in North and South America.

Organic revenue grew by 7% in the three months to the end of December from the same period the year before. That was a combination of a 9% rise in North America and a 13% increase in the South, partly offset by a 2% decline in the UK and Ireland and a steeper 11% drop in EMEA and Asia Pacific.

Total revenue at constant currency rose 10% and by 7% when foreign exchange rates are taken into account.

It said it expects organic revenue to grow 3% to 5% in the final quarter of its financial year covering the three months to the end of March, noting it will have a strong comparative period from the year before as it laps last year’s mortgage uplift.

It said annual earnings before interest and tax should be in the range of $1.36 billion to $1.38 billion, which would compare to the $1.38 billion reported in the last financial year.

Experian intends to release its annual results on May 19.

Rio Tinto said iron ore prices ‘rose significantly’ in the second half of 2020, boosted by a tighter market, a strong industrial recovery in China and better demand in Japan, Korea and Europe.

Rio Tinto said it is aiming to produce 325 million to 340 million tonnes of iron ore from Pilbara in 2021.

In terms of other commodities, bauxite output was 2% higher in 2020, aluminium production was flat and mined copper output dropped 9% but was still above expectations.

Premier Foods said it had ‘another exceptional quarter’ in the 13 weeks to December 26, which should allow the company to report a large lift in products for the full financial year.

Third-quarter sales jumped 9% year-on-year and rose 12.5% in the first nine months of the year, with branded sales posting stronger growth of 12.1% in the quarter and 16% year-to-date. It said it has continued to outperform the market and gain volume and value share, while online sales are also growing strongly after rising 90% in the latest quarter.

Premier Foods said it expects to deliver a trading profit of between £145 million to £150 million for the full year. That would be up between 9% to 13% from the £132.6 million profit delivered in the last financial year. It said net debt to Ebitda should sit below 2.0x at the end of the year, behind its medium-term target of 1.5x.

Gold miner Centamin said production was down by around half in the final three months of 2020, but said revenue has grown thanks to higher gold prices.

Centamin’s top line grew despite reporting flat sales for the year considering cash costs only increased 3% in the year whilst average gold prices jumped 26% to $1,766. That meant revenue in the year climbed to $829 million from $652 million in 2019.

Online bookmaker 888 said it has signed a multi-year extension to its partnership with Caesars Interactive Entertainment that will see it continue to power the World Series of Poker’s online rooms.

888 said the World Series of Poker brand is ‘the world's most prestigious and longest-running poker series, which sees hundreds of thousands of entrants from across the globe compete for millions of dollars with live tournaments broadcast to an international audience.’

The company provides a turnkey poker platform to Caesars Interactive’s services in the US and 888 said the partnership will also see its next-generation software ‘Poker 8’ be deployed shortly. 888 launched the software in Europe last year and says it offers ‘a significant advancement in user experience including new graphics and animations while also including key features like multi-day and multi-flight tournaments.’

‘We are also excited at the prospect of adding new states to our unique interstate poker network in 2021 and beyond, which we believe would drive a significant increase in liquidity for poker players on the 888 platform,; said the head of US operations Yaniv Sherman.

‘Our extended relationship will also enable 888 to gain a presence in new U.S states following the required regulatory approvals, which presents an important opportunity in our long-term development strategy for the U.S. market,’ he added.

Hammerson collects less than half of rent from tenants

Landlord Hammerson said it has collected less than half the rent due for the first quarter of 2021 as many tenants continue to struggle during new lockdown rules.

It said many outlets had seen an improvement in footfall late last year as lockdown rules were eased but that most were struggling again under new restrictions. Currently, only a quarter of Hammerson’s tenants in the UK and Ireland are open, while many of its French tenants are impacted by the 6pm curfew that is in place.

Engineering services group Wood Group said it has secured a five-year contract worth $130 million to work on the Morecambe Bay gas fields from Spirit Energy.

Wood Group said it will look to manage the fields – described as ‘one of the UK’s largest gas accumulations’ – to extend its field life, low costs and reduce the site’s carbon intensity. The contract will employ around 130 people, Wood Group said.