Pets at Home shares hit a new all-time high this morning after it said it expects to beat expectations in the current financial year after being able to remain open as an essential retailer throughout the various lockdowns.

The company, which has over 450 stores and vets’ practices, said sales for both its pet care products and veterinary services had accelerated during the third quarter to the end of December and that it will remain open during the current lockdown. It did not provide a growth figure, but it implied it will greater than the 12.7% growth reported in the second quarter to October 8.

‘While renewed COVID-related restrictions on a national level may constrain trade, we remain an "essential" retailer and the measures we continue to take across our stores, veterinary practices and online operations are ensuring we remain in a strong position to meet all of our customers' pet care needs,’ the company said.

As a result, it expects to deliver annual underlying pretax profit of ‘at least’ £77 million in the year to the end of March. That is below the previous guidance of £93.5 million, but that did not take into account the £28.9 million in business rates relief that it has promised to repay. Excluding business rates, the previous guidance was for underlying pretax profit of £65 million, meaning it has lifted its guidance by over 18%.

Pets at Home was one of many retailers that decided to return the business rates relief that was meant for struggling businesses because it was able to continue trading.

It also said its balance sheet has been bolstered by the £80 million it received after recently selling its Specialist Group to Linnaeus Group in December.

Pets at Home surged over 12% on the open to a fresh all time high of 475. The price has since eased back and at the time of writing trades +8% at 449.9 – still an impressive surge higher!

Pets at Home has traded within a well-defined ascending channel since early December. Today’s gap higher saw the price break out of the upper bank od the channel, although the move above the upper band lacked follow through.

The share price trades above its 100 sma and today’s gap open has seen it take out its 50 sma on the 4-hour chart as well.

The RSI is above 50 in bullish territory but below the overbought level of 70 meaning that there could well be more upside on the cards.

The price is currently battling resistance at 450 a confluence of the upper band of the channel and the previous all-time high, a meaningful move through here could see today’s all time high of 475 retested. 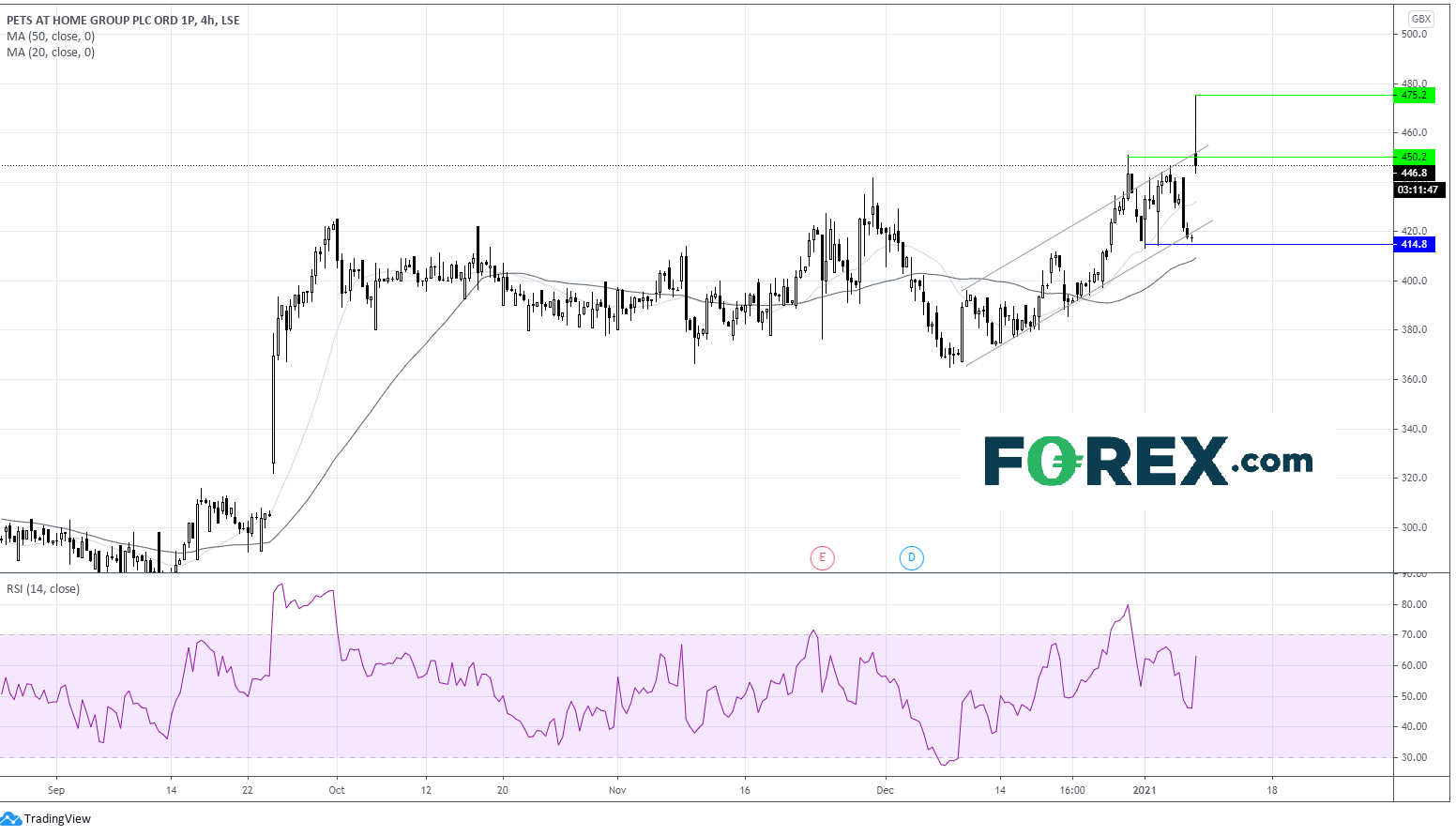 Pest control expert Rentokil said it expects to deliver better-than-expected profits in 2020 after the strong trading momentum reported in the third quarter continued in the final three months of the year.

The firm said adjusted profit before tax and amortisation would ‘slightly above the top end of the range of current market expectations’. It said sales in the fourth quarter had been strong for both its pest control and hygiene divisions, primarily because of strong demand for one-off disinfection services during the pandemic.

‘We are looking to the future with confidence. However, while global vaccination programmes offer hope that we will see an end to the pandemic, the financial outlook for 2021 inevitably remains uncertain, in particular with limited visibility on the sustainability of one-off disinfection services, the recent strengthening of sterling, and the undetermined impacts arising from recently rising cases of COVID-19 globally and new and prolonged country lockdowns,’ the company said.

Rentokil also announced it has bought commercial and residential pest control firm Environmental Pest Service based in Florida, US. It said the company made annual revenue of £60 million in 2020. That makes it the largest of its most recent acquisitions in North America, having bought eight other pest control businesses during the fourth quarter with further combined annual revenue of £48 million.

Rentokil did not disclose the amount it has paid for Environmental Pest Service but said the cost of all 23 acquisitions made during 2020 totalled £180 million. The combined revenues of all its new acquisitions last year is around £150 million.

Barratt Developments said it had an ‘excellent’ first half that resulted in the housebuilder selling more homes at higher prices, adding it would resume dividend payments next month.

It said sales were buoyed in the period by pent-up demand from the initial national lockdown and the stamp duty relief introduced by the government, which will expire at the end of March.

Barratt said it expects to build 15,250 to 15,750 homes in the financial year to the end of June. However, it warned product availability would be hit in the third quarter because of the high demand and more construction activity undertaken in the first half.

‘We expect a lower level of completions in our second half relative to our first half reflecting the reduced level of work in progress carried forward at December 2020 compared to June 2020 and, as a result, a greater reliance on construction activity in the half year ahead. We continue to expect to deliver around 650 home completions from our joint ventures,’ said Barratt.

Barratt also confirmed that it intends to implement a new dividend policy based on a dividend cover of 2.5x as it prepares to restart dividend payments when it releases its interim results on February 4.

The supermarket blamed the ‘on-off restrictions’ implemented by the government and ‘distortions in demand’, but said it believed it delivered a robust performance. It warned near-term trading ‘remains very challenging’.

Although the partnership with Ocado provides it with a crucial online grocery presence during lockdown, its stores in town centres and travel hubs have suffered as people remain at home. M&S said its stores in retail parks and its Simply Food stores had outperformed over Christmas. Meanwhile, clothing and home sales have also been hurt by lockdowns. The steep sales fall comes despite online sales jumping 47% - demonstrating how much is sold in store.

With the UK recently entering its third national lockdown, M&S said store sales would continue to suffer but that it was continuing to take mitigating action.

M&S also warned it could be hit by post-Brexit tariffs. It said products that it exports to its EU bases could be hit by ‘potential tariffs’ and that ‘very complex administrative processes’ could be introduced. This would significantly impact its businesses in Ireland, the Czech Republic and its franchise business in France.

M&S intends to publish annual results for the year to April 3 on May 26.

Component maker Essentra said it has continued to stage a gradual recovery since sales plunged during the initial lockdown last year. Revenue plunged by 9.8% in the second quarter of 2020 and by 6.7% in the third, but Essentra said this has continued to improve and that sales were down by just 1.1% in the final three months of the year.

Essentra said the improved performance meant it expects to meet expectations for the full year.

The components division has continued to drive the improvement. The packaging division performed better in the fourth quarter despite a fall in elective surgeries and prescription levels, while the filters division had a ‘tough’ end to the year because of logistical problems in Asia.

It has continued to generate cash and the company had £825 million worth of liquidity available at the end of the period. Net debt should be 1x to 2x Earnings before interest, tax, depreciation and amortisation for the full year.

Clarkson to beat profit expectations in 2020

Global shipping giant Clarkson said its annual underlying profit will be ‘ahead of market expectations’ in 2020 and in the range of £42 million to £45 million.

While higher than expected, that would still be below the £49.3 million profit delivered in 2019.

Clarkson said it intends to release its annual results for 2020 on March 8.