US CPI Preview: Will Tuesday’s CPI affect the FOMC’s decision on Wednesday?

On Tuesday, December 13th, the US will release its CPI reading for November.  Expectations are for the headline print to come in at 7.6% YoY after a surprisingly lower than expected October print of 7.7% YoY.  If the print is in-line with expectations, it would be the fifth monthly decline in a row after peaking in June at 9.1% YoY, as well as, the lowest reading since January!   In addition, the Core CPI print for November is expected to be 6.2% YoY vs a previous reading of 6.3% YoY. The result for the Core print was also a surprise in October, as economists expected a reading of 6.5% YoY.

Could these results affect the FOMC’s decision as to how much it should hike rates on Wednesday?  The Fed last met on September 21st.  By the time the FOMC meets on December 14th, it will have seen the September, October, and November CPI prints.  As mentioned, the October print was much lower than expected. In addition, the Fed has seen Core PCE prints for September and October.  The September Core PCE reading was 5.1% YoY vs an expectation of 5.2% YoY and a prior reading of 4.9% YoY. The October print was 5% YoY vs an expectation of 5%.  In addition, the Fed still sees the labor market as tight. During Fed Chairman Powell’s speech as the Brookings Institute on November 30th, he prepared that market for a 50bps rate hike at the December meeting with less hawkish comments, such as “relying less on forecasts means doing more risk management, and slowing down rate rises at this point is a good way to balance the risks of overdoing it”.  Armed with lower inflation data since the last FOMC meeting (regardless of the November CPI print) and a solid labor market, the FOMC will probably stick to the script and hike by 50bps to bring the Fed funds rate to 4.5% on December 14th.  The risk to the CPI data is that it is much lower than expected.  Perhaps it could prompt the Fed to only hike 25bps? 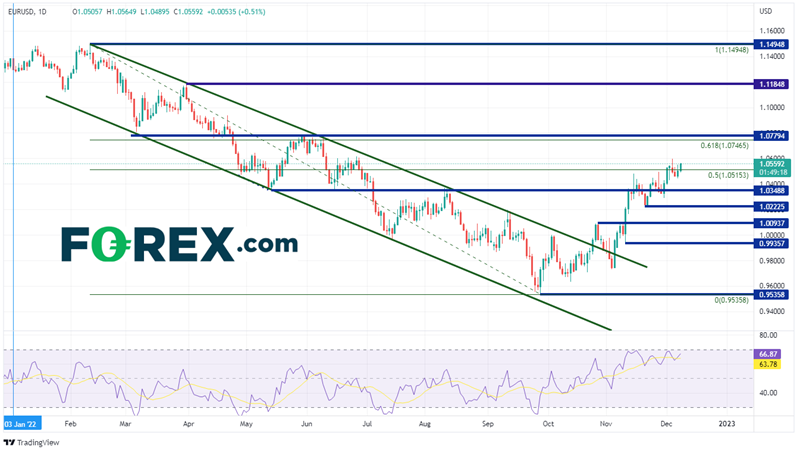