Traffic along the Suez Canal has been suspended amid efforts to dislodge the container vessel which became wedged three days ago. Reports that it could take even weeks to remove the vessel which run aground are unnerving investors. This is a key trade route, seeing 12% of the global traded goods travel along it each day.

Oil prices jumped 6% yesterday on the back of the blockage news today oil prices have plunged 3%. The Canal is an important passage for crude oil from the Persian Gulf to Europe and the US east coast as well as oil being transported from Russia to Asia.

US stocks are pointing to a lower open in risk off trade as investors digest the latest developments surrounding the Suez Canal.  Energy stocks are under pressure in Europe and are expected to come under pressure in the US session. Energy and commodity stocks have dropped sharply lower in Europe a move which is expected to be replicated in the US session.

AstraZeneca ADR – trades -0.2% after stating that its covid vaccine was 76% effective, rather than the 79%. The update came after the firm was criticized earlier in the week for using outdated data.

Nike – trades -4.6% pre-market as the company, along with other Western companies came under pressure in China after historical comments expressing concern over labour conditions in Xinjiang  were brought to light again by Chinese media.

After a strong run up from its mid -March lows Nike has been relatively range bound since the start of the year.

Stock is expected to drop some 4% on the open breaking it out of the lower band of the horizontal channel.

The RSI is supportive of further downside whilst it sits in bearish territory but not yet oversold. 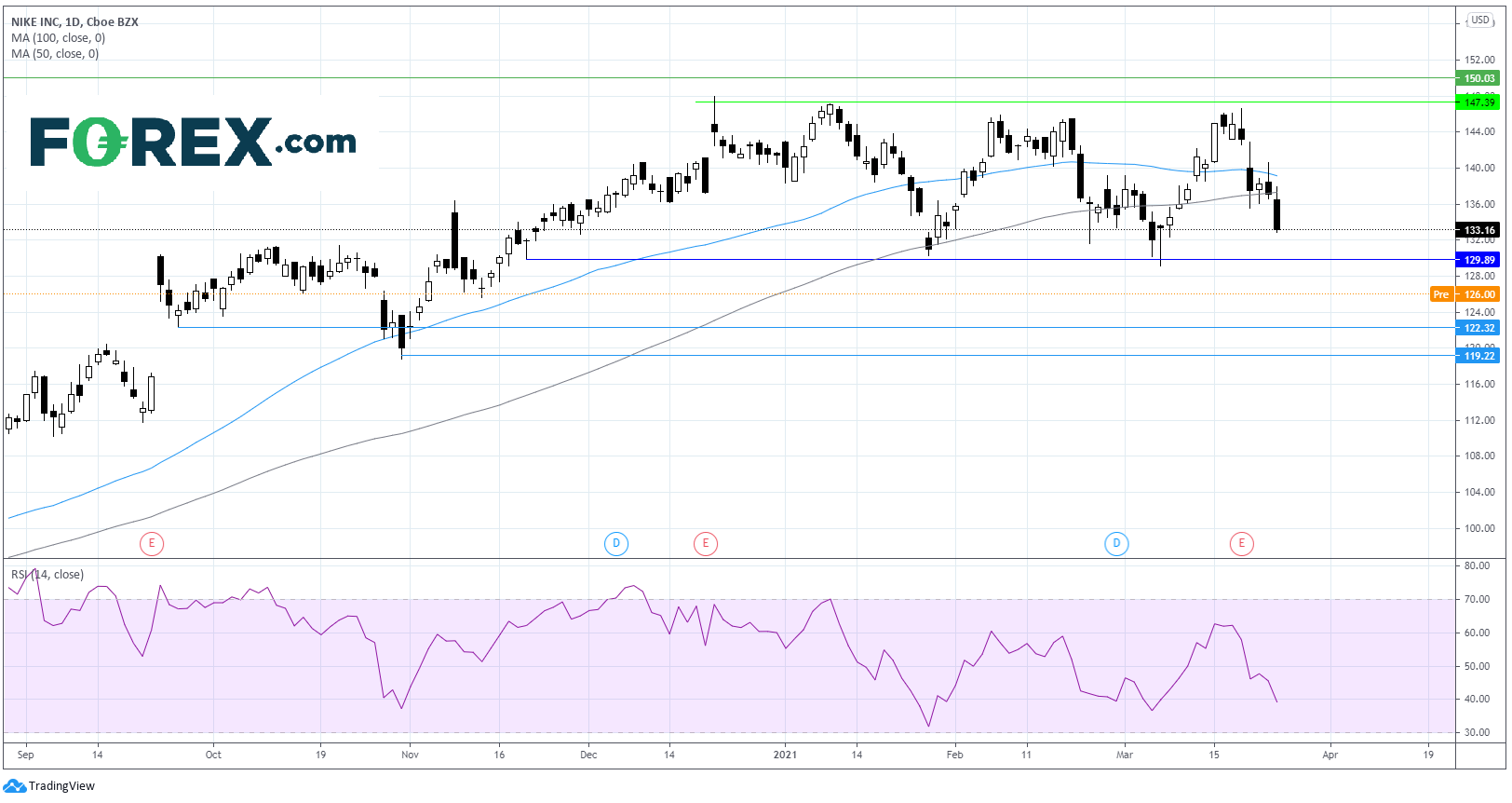 US jobless claims rose by 684k down almost 100k from last week’s 770k, and well ahead of the 730k forecast. This is the lowest level that initial claims have been since the start of the pandemic, as the recovery gains momentum.

The data comes following a positive assessment of the US economic outlook by Federal Reserve Chair Jerome Powell & US Treasury Secretary Janet Yellen in their second day of testifying before Congress.

These comments come even before the US government looks to upgrade infrastructure with an eye watering $4 trillion.

The US Dollar is advancing following Fed Powell & Janet Yellen’s upbeat outlook for the US economic recovery and amid safe haven flows over growing concerns regarding the Suez Canal blockage.

Oil trades on the back foot as concerns over a resurgence of covid overshadows combined with the blockage of the Suez Canal sent prices tumbling.