US futures are pointing to a stronger start with tech set to outperform. All three main US indices are pointing higher rebounding from yesterday’s lower close as investors gear up for another appearance from Fed Chair Powell & Janet Yellen.

Yields have pared back to 1.62%, significantly down from last week’s 1.75% boosting demand for tech stocks which had come under pressure as yields rise. Yields have eased as Jerome Powell remains firmly dovish and as rising covid cases in Europe, Brazil and India raise questions over the global economic recovery.

Disney & AMC Entertainment (-4%) after Disney announced that it will push back the release of its latest Marvel movie Black Widow to July. Furthermore, it will release simultaneously on its streaming platform for a fee and at the theatres. The decision reflects the fact that the public might not yet be ready to embrace large gatherings. The news comes just after AMC started reopening its theatres.

Tesla trades +1% pre-market after CEO Elon Musk announced that Tesla will now accept Bitcoin as payment. Details on pricing policy have been light, but the announcement boosted Bitcoin by 5%.

Intel – trades +4.8% pre-market after announcing plans to expand significantly its advanced chip  manufacturing capacity by spending as much as $20 billion to build 2 factories in Arizona.

Intel’s share price has been rising since hitting a $44.00 low in November. It trades above its 20 & 50 sma on the daily chart marking an establish bullish trend.

The RSI is also supportive of further upside and technical bullish.

The share price has struggled to push beyond resistance at $66 the yearly high, which capped the price last week. A close over this level could bring $68 the 2020 high into focus. 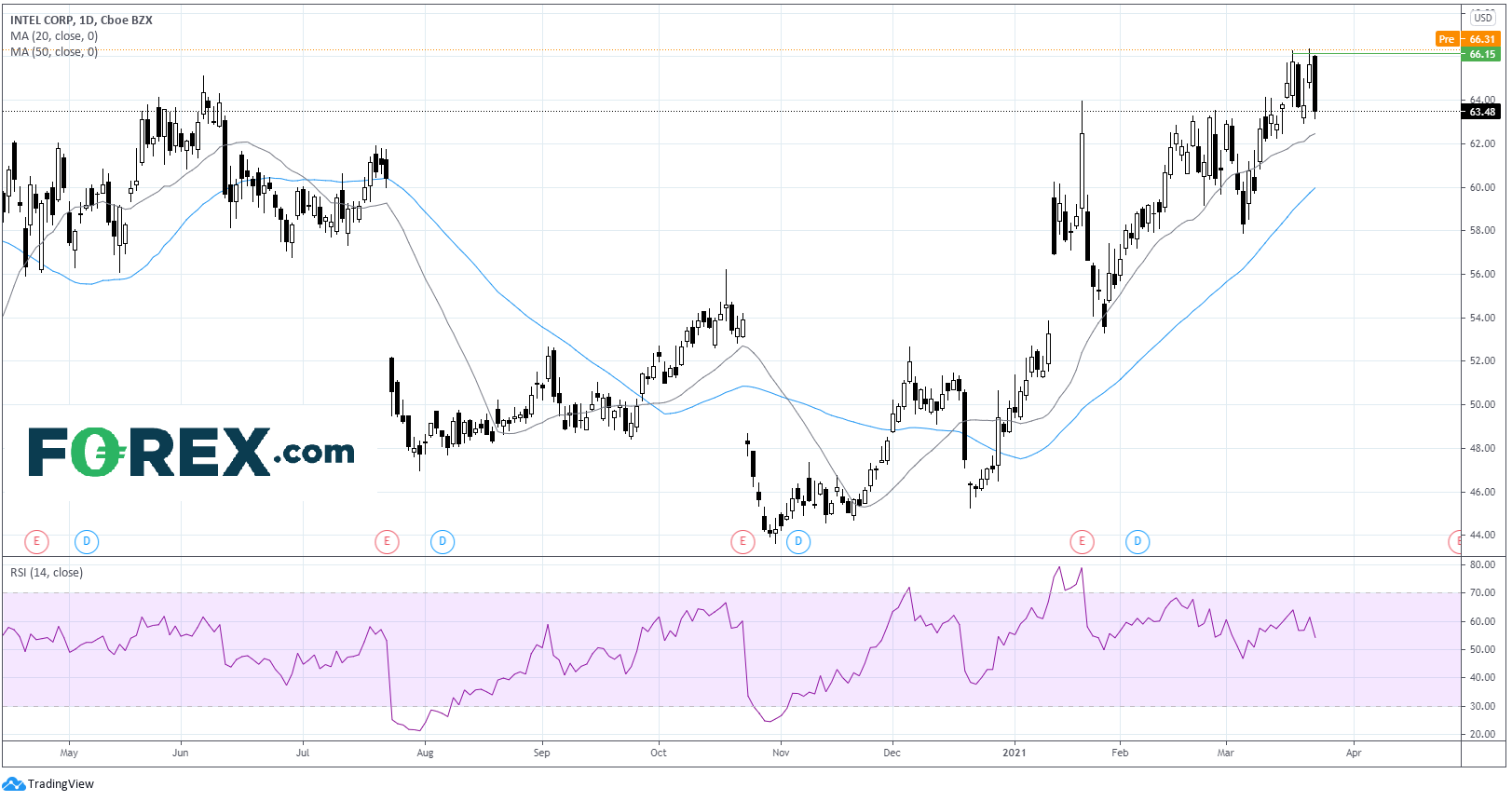 GameStop reported disappointing quarterly numbers will revenue coming in 3.3% lower whilst EPS missed forecasts by 8%. However, it wasn’t all bad news with comparable store sales rising 6.5% whilst digital sales surged 175% boosting the argument for its reinvention as an online only retailer.

Jefferies have turned bullish on the stock hiking its target price from $15 to $175.

PMIs in Europe showed that business activity accelerated in March, beating forecasts by a significant margin. However, the upbeat data failed to boost the mood in Europe where rising covid and tighter lockdown restrictions have raised concerns over a rapid recovery.

Looking ahead, Fed Chair Powell & Janet Yell will appear for a second time before Congress. Yesterday, Powell stuck to the dovish hymn sheet whilst Yellen talked tax hikes to plug the budget deficit.

In addition to durable goods, US PMIs for both manufacturing and service sector will be realease. Both are expected to show strong expansion.

The US Dollar is advancing on safe haven flows as covid cases rise in Europe and on the possibility of US tax hikes.

GBP/USD – is under-performing peers after weaker than forecast CPI data. UK CPI rose 0.1% MoM in February. This was up from January’s -0.2% decline but still short of the 0.5% forecast. Annually, inflation rose 0.4%, well down from 0.7% in January and 50% below the 0.8% reading expected.

After tanking over 6% lower in the previous session oil prices are on the rise, clawing back some of those losses. Both benchmarks, WTI crude and Brent have fallen around 14% from recent highs into correction territory.

On the data front, crude stockpiles rose by 2.9 million barrels against an expected decline of 300,000 barrels. Attention will now turn to the EIA stockpiles data due later today.

It is also worth keeping an eye on the blockage in the Suez Canal, a route used to move oil. Failure to clear the path quickly could offer near term support to oil prices.