The Fed kept rates on hold as expected. The Fed also upped GDP forecast to 6.5% this year up from 4.3%. The inflation forecast was also upped to 2.4% from 2%, although the Fed said that this was expected to be temporary.

The Fed doubled down on its accommodative stance. The dot plot was more dovish than expected with most policy members not expecting a rate rise until 2024. Although 7 of the 18 members now expect a rate hike in 2023.

US bond yields have surged on the upgraded growth forecast and have grabbed onto the slight shift in voting at the Fed. Yields om the 10 year hit 1.75% a fresh 13 month high.

The number of people filing for unemployment benefits in the US rose unexpectedly to 770k vs 725k the previous week. This was above the 700k forecast. Despite the blip the US labour market is showing signs of improving as states reopen. The data had little impact on the USD or futures.

Stocks set for a mixed start, tech under pressure

After the S&P500 and the Dow Jones reached fresh all times highs in the previous session, stocks are pointing to a broadly lower start.

The tech sector is once again set to fall lower on the open on the back on the rising yields. High growth tech stocks are particularly sensitive to interest rate expectations.

However, the Dow Jones is pointing higher as cyclicals remain firmly in favour, supported by the Fed’s forecast of super strength economic growth this year.

Apple – trades -1.4% in the tech selloff and despite announcing that it could be releasing a new line of iPads as soon as next month.

Tesla – trades -3% pre-market as part of the broader tech selloff and after reports that its most popular model in the UK Model 3 will no longer be covered under the UK government’s subsidy programme. The news comes as Volkswagen & BMW ramp up their EV targets.

Nike – trades -0.6% lower pre-market and is due to report earnings after the close. Nike is expected to release another set of strong earnings as business continues to bounce back from the pandemic. Strong growth from China, the US and from digital sales is expected to underpin the numbers. However guidance will be key particularly with the outlook in Europe as stores start to reopen.

After posting strong gains across 2020, the bullish run has run out of steam and the price has been consolidating since the start of the year. The price trades range bound capped by 147 the all time high on the upside and 130 on the lower band.

The price trades towards the upper band of the holding channel, the RSI is indicative of further gains but the 147 resistance is pricing a tough nut to crack. A strong set of numbers could help Nike clear the 147 barrier and target 150 the round number. 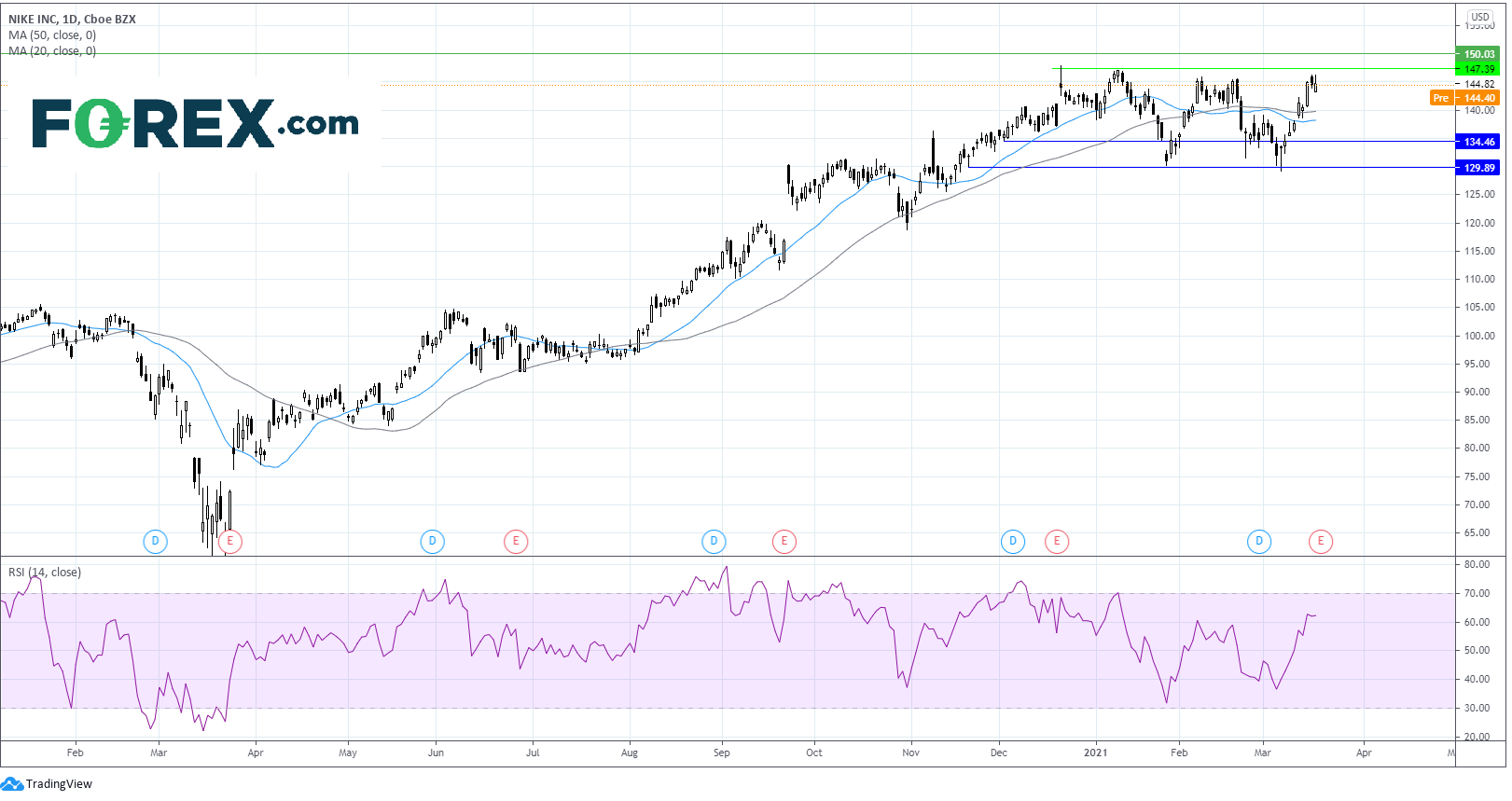 The US Dollar is pushing higher paring losses from the previous session. The DXY settled -0.5% lower on Wednesday after the Dovish Fed. However, bond yields are on the rise again and the greenback is tracing them higher.

GBP/USD – As expected the Bank of England kept interest rates on hold and the bond buying programme unchanged. The Pound slipped after the BoE said that it will not tighten monetary policy until there is clear evidence that significant progress is being made towards achieving 2% inflation target.

Oil is once again under pressure, slipping lower for a fifth straight session amid an increase in oil inventories, concerns over the deteriorating covid situation in Europe clouding the demand outlook cand on the back of a stronger US Dollar.

Yesterday’s EIA stock pile data showed that crude inventories increase for a fourth straight week after US refineries were forced to shut during an usually cold weather front. Inventories rose by 2.4 million barrels last week disappointing the market. API data earlier in the week had estimated a 1 million barrel draw.

There is no high impacting data due to be released.