Mexico CPI remains high.  After reaching a peak of 8.70% in both August and September, Mexico’s CPI deceleration stalled in December at a reading of 7.82% YoY vs a November print of 7.8% YoY.  However, the Core CPI fell from a peak of 8.51% YoY in November to 8.35% YoY in December.    What does this mean for the Bank of Mexico (Banxico)?  Recall that Banxico has been in lockstep with the US Federal Reserve regarding its interest rate hikes since early last summer.  US inflation peaked in July, while Mexico’s inflation peaked in September.  However, December’s US CPI is expected to continue to fall again to 6.5% YoY when it is released on Thursday vs 7.1% YoY in November.  In addition, the Fed is expected to hike rates by 25bps on February 1st.  If the US CPI comes out “as expected” at 6.5%, there will now be a larger gap between Mexico’s inflation (at 7.82%) vs US inflation.  Will the Bank of Mexico be forced to hike another 50bps, despite the US possibly only hiking 25ps? 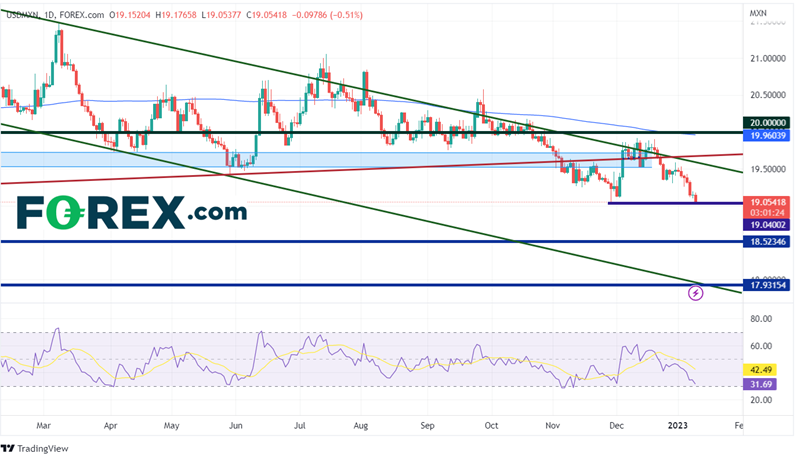 On a 240-minute timeframe, the RSI is diverging with price, an indication that price may be ready for a bounce.  If the recent lows do hold, first resistance is at the top trendline of a shorter-term channel that USD/MXN has been in since the beginning of the year and horizontal resistance at 19.2573.  Above there, resistance is at the highs of January 6th near 19.3490, then again at the highs of December 30th at 19.5888. 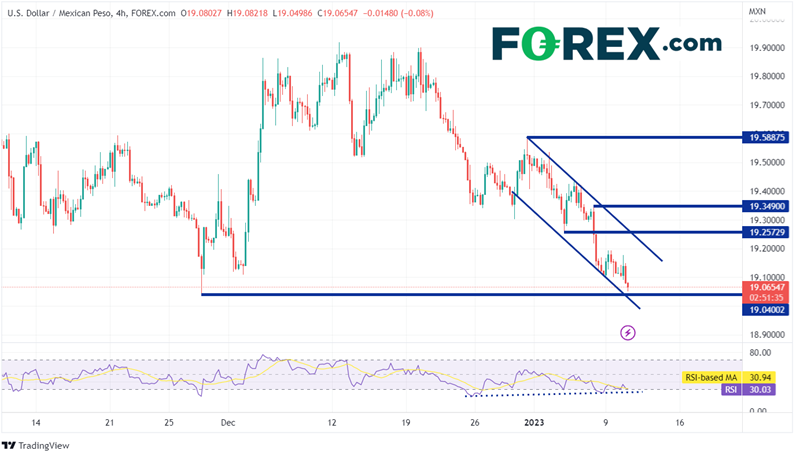 The US releases CPI on Thursday.  If the print is as-expected or lower-than-expected, the Bank of Mexico may have to break the peg of rate hikes to that of the FOMC.  Therefore, watch for USD/MXN to move lower if Banxico keeps a more aggressive rate hike stance than that of the Federal Reserve.