BoJ Governor Kuroda’s dovish comments earlier sent JPY pairs higher after a strong Japanese CPI report. Japan’s December CPI report climbed to 4% YoY, as expected, to its highest level since 1981.  This comes after a November reading of 3.8% YoY. In addition, the Core CPI (excludes fresh fish) increased to 4% YoY after a 3.7% YoY print a month earlier.  Ex-Food and Energy CPI increased to 3% YoY vs a previous reading on 2.8% YoY.  Although inflation is double that of the BOJ’s 2% target, BoJ Governor Kuroda continued to provide dovish comments, similar to those from the BoJ Monetary Policy meeting earlier this week. Kuroda said that “Our hope is that wages start to rise and that could make our 2% inflation target to be met in a stable and sustainable manner.”  He also confirmed that the BoJ’s decision to widen the band the 10 year JGB was not a mistake and that monetary policy will continue to be accommodative.  Kuroda will resign as BoJ Governor in April after attending his last BoJ Monetary Policy meeting in March.  A replacement has not yet been named.

Recall that on Wednesday the Bank of Japan left Monetary Policy unchanged.  In addition, it left its Yield Curve Control unchanged after increasing the band around the 10 Year JGB from +/- 0.25% to +/- 0.50% at its December meeting.  As a result, USD/JPY jumped 340 pips to 131.57.  However, traders took the opportunity to sell US Dollars and buy Yen, pushing the pair back near unchanged on the day.  Other JPY pairs followed a similar pattern.  Notice that price struggled to remain below the 61.8% Fibonacci retracement level from the lows of 2022 to the highs of 2022 at 128.17.  After today’s comments from Kuroda, the pair reversed and is heading back towards Wednesday’s intra-day high. 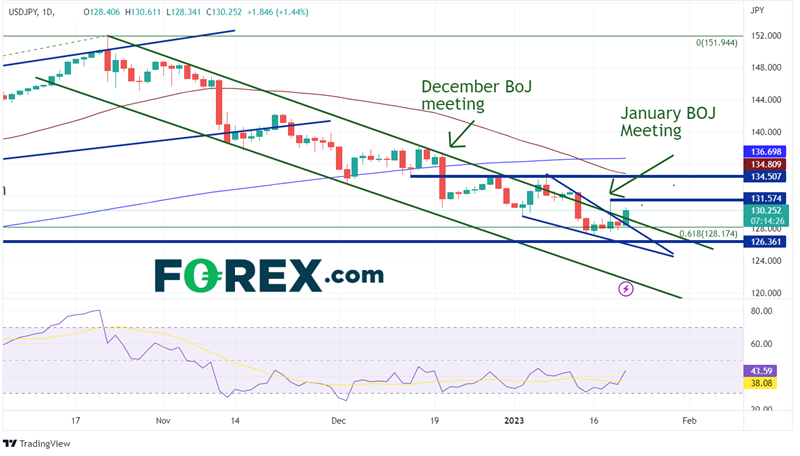 On a shorter-term 240-minute timeframe, USD/JPY has made a channel of its own.  Whereas price has broken above the channel on the daily timeframe, it still remains with the channel on the 240-minute timeframe.  First resistance is at the highs of January 17th at 131.57.  Above there, price can hit the top trendline of the shorter-term channel at 132.18, then the highs from January 6th at 134.77.  However, if sellers decide to enter once again near the recent highs, USD/JPY could move lower.  First support is at the low of January 15th at 127.22.  Below there, support crosses at the lows from May 24th, 2022 at 126.36, then the bottom trendline of the shorter-term channel near 125.75. 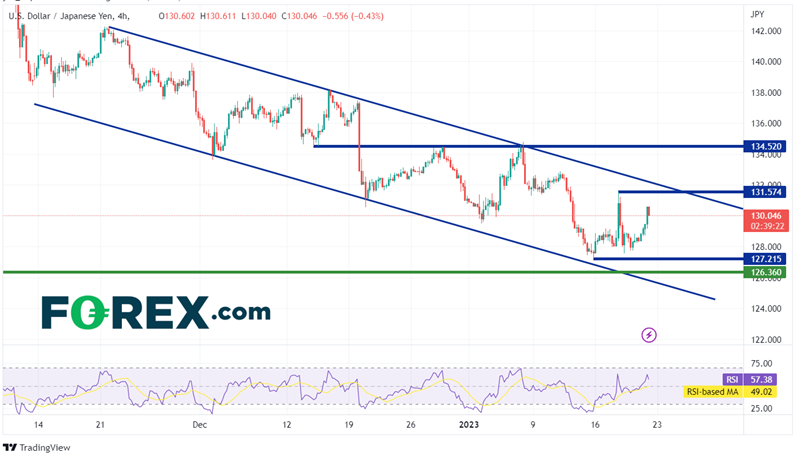 Japan CPI for December reached its highest level since 1981 at 4% YoY.  Despite this, BoJ Governor Kuroda continued with dovish comments regarding Monetary Policy.  As a result, USD/JPY moved roughly 200 pips higher on Friday.  Continue to monitor Yen pairs as they could remain volatile next week.  Manage risk accordingly.