#UK - IRELAND#
Bunzl, a distribution and outsourcing company, posted a 3Q trading statement: "Bunzl's diversified and resilient business model has delivered strong overall growth over a challenging period, with Group revenue for the third quarter up 4.0% at actual exchange rates and 8.8% at constant exchange rates. Underlying revenue increased strongly by 8.0% at constant exchange rates reflecting the continued growth in the sale of Covid-19 related products, such as masks, sanitisers, gloves and disinfectants. (...) However, given the performance year to date and the impact of recently announced acquisitions, the Company currently expects revenue in the second half of 2020 to grow strongly at constant exchange rates and anticipates a slightly higher second half operating profit margin compared to the prior year."
From a weekly point of view, following the last March-April V-bottom pattern , a weekly close above 2600 is needed to release a new upward potential towards 3000. 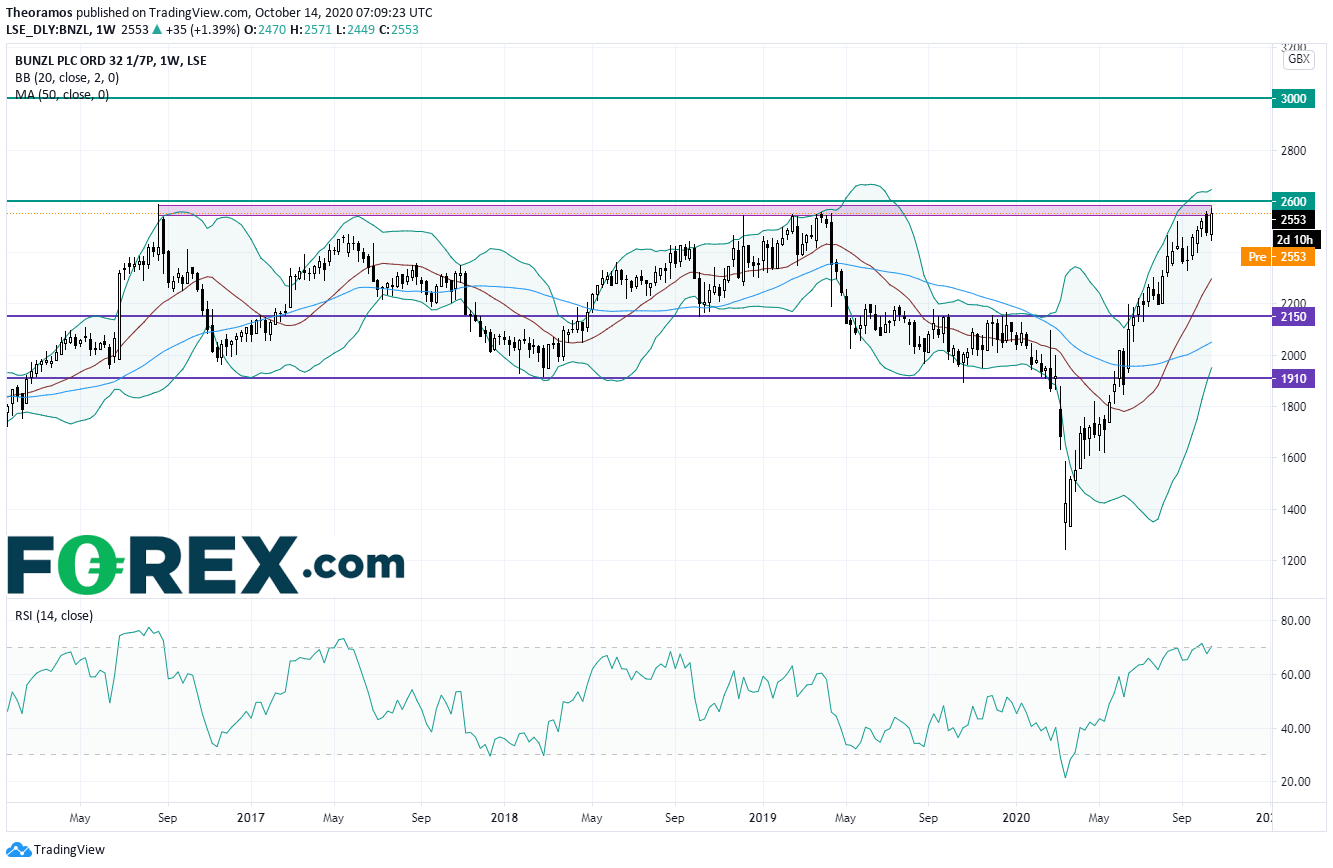 Anglo American, a multinational mining company, reported that the value of rough diamond sales for De Beers' eighth sales cycle of 2020 amounted to 467 million dollars, compared with 297 million dollars in the prior-year period.

Standard Life Aberdeen, a global investment company, was upgraded to "buy" from "hold" at HSBC.


#GERMANY#
Hapag-Lloyd, a shipping and container transportation company, was upgraded to "overweight" from "underweight" at JPMorgan.


#FRANCE#
Vivendi's subsidiary, Universal Music Group's shareholder Chinese tech giant Tencent may exercise the option to increase its holding in the company to as much as 20% from 10%, reported Bloomberg citing people familiar with the matter.

Accor, a hospitality company, was downgraded to "hold" from "buy" at Deutsche Bank.


#SPAIN#
Repsol, a fossil fuel company, was downgraded to "hold" from "buy" at HSBC.


#BENELUX#
ASML Holding, a supplier of photolithography systems for the semiconductor industry, announced that 3Q net income rose 69.4% on year to 1.06 billion euros on net sales of 3.96 billion euros, up 32.5%. The company said: "We expect fourth-quarter revenue of between E3.6 billion and E3.8 billion with a gross margin of around 50%, R&D costs of E550 million and SG&A costs of E140 million. Our outlook for the full year 2020 is therefore confirmed. (...) For 2021, we expect low double-digit growth."

Just Eat Takeaway, an online food order and delivery service provider, reported that 3Q orders increased 46% on year to 151 million and were up 37% to 408 million in the 9-month period.