Are SNB being ‘franc’ about a potential hike?

Comments from SNB’s president suggest the central bank might be closer to hiking rates sooner than some expect.

The Swiss franc was firmly higher yesterday. A natural assumption could attribute the moves to safe-haven flows stemming from a turbulent week of volatility. And whilst that is true to a degree, it is far more likely the broad-based rally for the Swiss franc were due to the SNB Chairman Thomas Jordon saying that they are “ready to act if inflation strengthens”. This has been taken as a sign the central bank will raise rates from -0.75%, a level it has been stuck at since 2015.

SNB are no longer fighting deflation

The consensus view has long been that SNB would prefer to have a weaker currency, particularly against the euro. And the central bank has been known to intervene to have just that. A sharp rise in sight deposits (a proxy for SNB intervention) shows it coincided with a top on CHF/EUR before prices then trended lower. And as the SNB President Jordan reminded us earlier this week, they did so to fend off deflation – which doesn’t make them a currency ‘manipulator’.

However, like many developed nations deflation is no longer a concern for the SNB. Inflation has now risen to 2.5% which is its highest rate since 2008, and they expect it to rise further before falling in 2023.

As such there is little evidence of any meaningful intervention despite the Swiss franc trending higher. And if the SNB do raise rates they may allow their currency to run further as fighting deflation is no longer their goal. 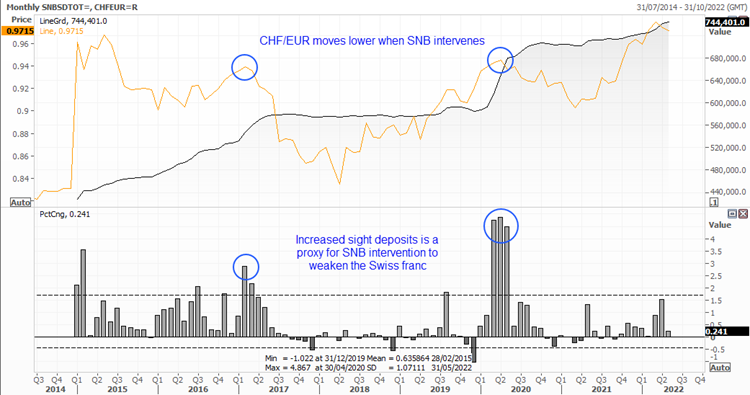 On the 29th of April, Jordon delivered a speech titled What are the consequences of the war in Ukraine for the SNB's monetary policy? In it he openly questions whether Switzerland will experience wage-spiral inflation seen elsewhere and explained they can allow the Swiss franc to be stronger in nominal terms due to higher rates of inflation abroad. Jordon also noted that EUR/CHF has at times been below parity, which hints that parity may not be a magical floor on the rate many assumed to be the case. Furthermore, Jordan hinted at a potential rate hike when he said at the end of the speech that “we will not hesitate to take the necessary measures to ensure price stability [inflation] in Switzerland in the medium term’.

Inflation data is next released on the 2nd of June, and subsequent SNB meetings land on June the 15th, September the 22nd and 15th of December. Should inflation continue to rise, it increases the odds that the SNB will raise interest rates by a minimum of 25-bps. With rates currently at -0.75%, they could be back to zero with three hikes. However, should the currency appreciate too quickly for SNB’s liking they will not hesitate to intervene to tame volatile moves. But given the assumption that SNB want a weak currency seems outdated, we think this allows for more CHF appreciation than some may expect. 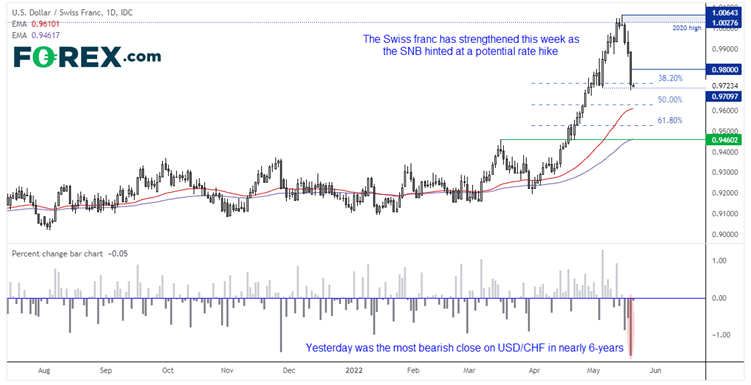 USD/CHF topped out around parity earlier this week, and bearish momentum accelerated on Joran’s comments yesterday. It was its worst session since June 2016 and we see the potential for further losses. As we’re heading into the weekend there is the potential for a bounce, but we’d be keen on exploring further signs of weakness below 0.9800. 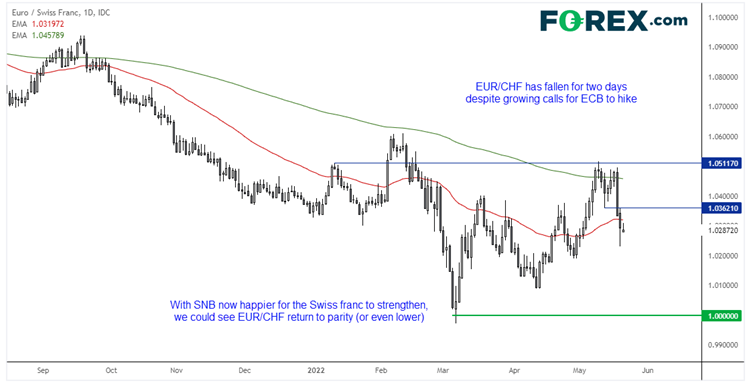 The case for ECB to hike rates grows, and that’s going to provide another level of support for EUR/CHF. Yet like USD/CHF, we’re running on the assumption that few expect SNB to hike rates, or realise that SNB are now happier to run with a stronger currency. And if we consider how quickly prices have fallen on EUR/CHF over the past two days (despite a growing call for ECB to hike rates) it again suggests consensus is having a rethink.

We may need to wait for a strong CPI print for Switzerland in June, but we see the potential for EUR/CHF to move down to parity (and dare we say, beyond) over the coming weeks or months.