After last week’s ECB-inspired volatility, the financial markets are calmer today. But this could be the calm before the storm as more central bank meetings are scheduled for this week, including the Bank of Japan on Tuesday, US Federal Reserve on Wednesday and Swiss National Bank and Bank of England on Thursday. Out of these central banks, the SNB would arguably be the most interesting one to watch given that they have more or less tied their policy to the European Central Bank and with the latter expanding its QE programme last week, the pressure is growing on the SNB to do more. The Fed meanwhile is unlikely to increase interest rates at this week’s meeting but the FOMC’s forward guidance will be important as far as the US dollar is concerned.

In addition to central bank meetings, there will be plenty of top-tier economic data to look forward to as well, including US and Canadian inflation figures as well as employment numbers from Australia and Britain. There will be something for everyone. Though there’s not much on the economic calendar today, at the weekend, there was more evidence that activity at the world’s second largest economy is continuing to slowdown: China's industrial production growth eased to +5.4% year-over-year in January/February from +5.9% in December. It was also weaker than +5.6% expected. The nation’s latest retail sales data also missed the mark but fixed asset investment topped expectations.

With China being Australia’s largest trading partner, the disappointing industrial data caused the Aussie dollar to open lower overnight before easing somewhat further later in the day. In fact, the AUD/USD is currently trading inside a key resistance range between 0.7535 and 0.7600. This area had been strong support in the past before a breakdown in early July 2015 saw price eventually drop to below 0.6900. So, it is a key reference point for traders and what price does here could determine the direction for the next couple of days at the very least.

If the AUD/USD retreats from this 0.7535/7600 range then it may go for a re-test of the old resistance at 0.7380, before potentially bouncing back. But it is also possible that the Aussie may even drop to test the bullish trend line slightly lower or even the 200-day moving average, at 0.7245/50 area, before making its next move. This could well happen given the weaker Chinese data and the fact the RSI is at the overbought level of 70.

However, the underlying trend for the Aussie has been bullish in recent times after a prolonged period of consolidation ended when it formed a false break reversal pattern at the prior support level of 0.6905 in January. Since then, the Aussie has made a series of higher highs and higher lows. So just like several other resistance levels, the above-mentioned 0.7535/7600 range may also break down. In this potential scenario, the next stop for the Aussie could be at the 161.8% Fibonacci extension level of 0.7730, or even at the psychological level of 0.8000.

Conservative trades may therefore wish to wait for the Aussie to make its move outside of the 0.7535-0.7600 range before taking a view in the direction of the break. Traders should not forget also that false breaks can and will happen sometimes – like the one at 0.6905 area. So, don’t forget about risk and position management. 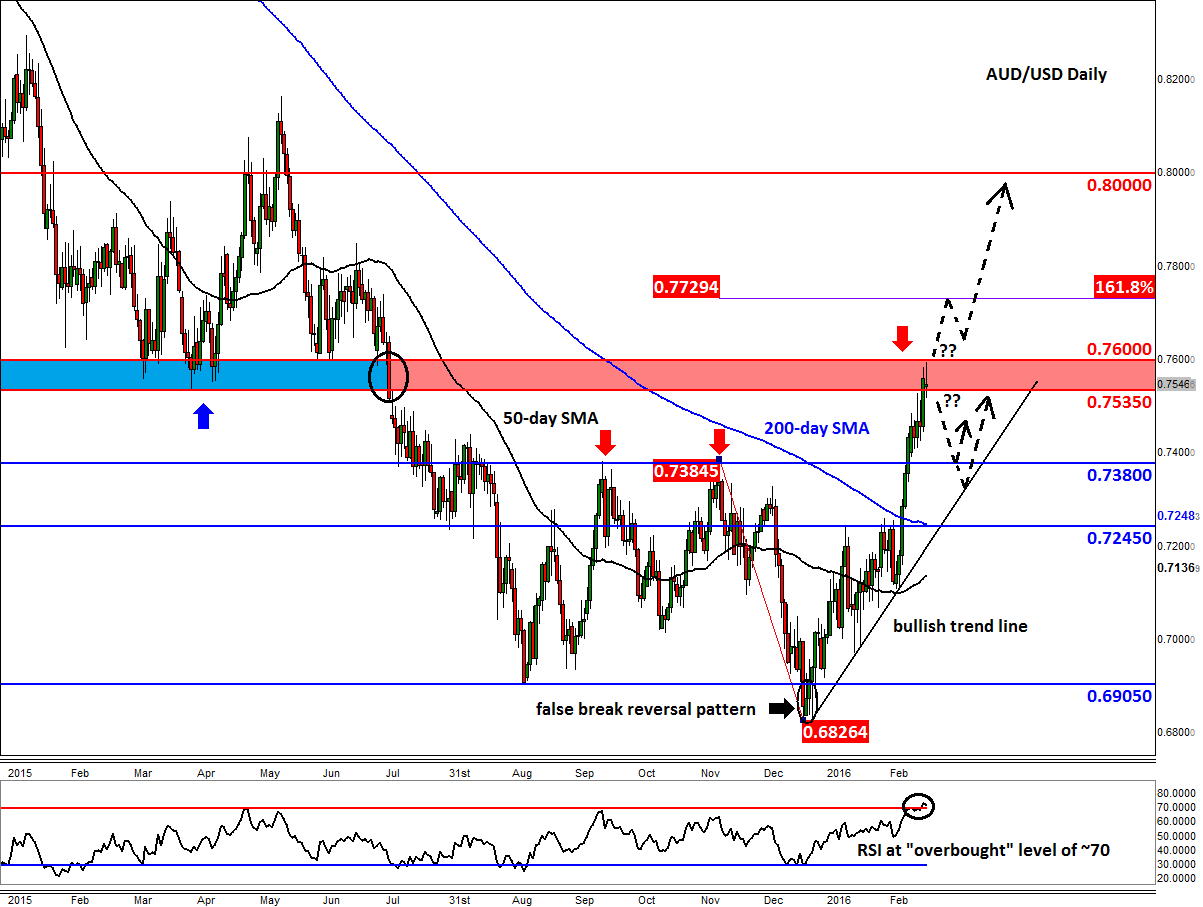