This is a quick update about the AUD/CAD article we posted on Wednesday of last week (click HERE for details).

Although oil prices have remained weak, the Canadian dollar has managed to hold its own relatively well compared to some of the other commodity currencies, with the Aussie and kiwi dollars both falling sharply in recent days on speculation about further rate cuts from their respective central banks. In contrast, the Bank of Canada delivered a more hawkish-than-expected policy statement last week, suggesting that it has moved to a more neutral stance. This week’s key event risk for the AUD/CAD pair is Canada’s CPI figures released on Friday, as well as the on-going volatility in oil and other commodity prices.

The resulting price action since our last update has been consistent with our expectations. As can be seen from the updated chart, below, the AUD/CAD has indeed falling to test the key support region in the 0.9725-0.9750 range. As previously mentioned, this area had been resistance in the past and it is also where the 200-day moving average converges with the shallow 38.2% Fibonacci retracement against the most low from May.

As you would expect, the cross has bounced off this 0.9725-50 support range today due to a combination of profit-taking from the bears and reloading of long positions from the bulls.

What price does next could have a big say in terms of near-term direction.

Conservative traders may therefore wish to wait for price to make its next move before taking a view on direction. 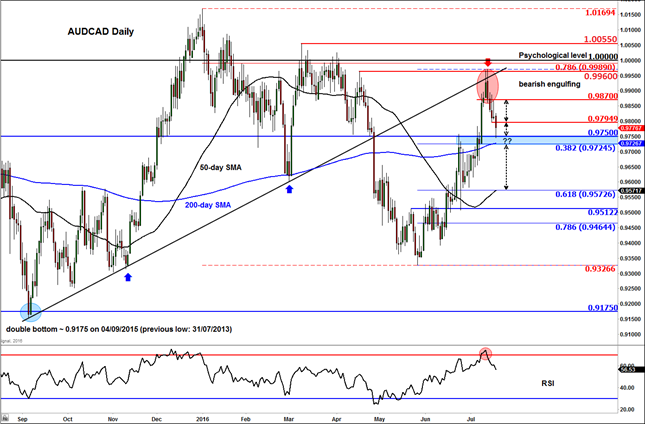