AUD/JPY one to watch

News that North Korea is willing to discuss disarming its nuclear weapons if its own safety can be guaranteed has reduced the tension in the region and the Japanese yen has weakened a little as a result.

News that North Korea is willing to discuss disarming its nuclear weapons if its own safety can be guaranteed has reduced the tension in the region and the Japanese yen has weakened a little as a result. However, it remains to be seen if the JPY will fall further, given the recent equity market volatility.

Among the yen crosses, the AUD/JPY looks quite interesting after it bounced at 81.50 support, potentially forming a double bottom reversal there. However, the key resistance levels remain intact so far, which means the bulls have some wood to chop before they can regain full control.

Among the key levels to watch is 83.30, a level which was previously support. The initial retest of this level was rejected earlier today. However if the AUD/JPY breaks through this level then we could see the sellers start to lose control.  So watch that level carefully. Above 83.30 the next resistance is seen at 84.35, a level which was formerly support and where we have the 38.2% Fibonacci level converging.

In terms of support, 82.45 is the first line of defence for the bulls, below which there’s nothing significant until that 81.50 level. If the AUD/JPY were to come back to the 81.50 level, it may break through it at the third time of asking and potentially head towards the long-term 61.8% Fibonacci level at 79.80/5. 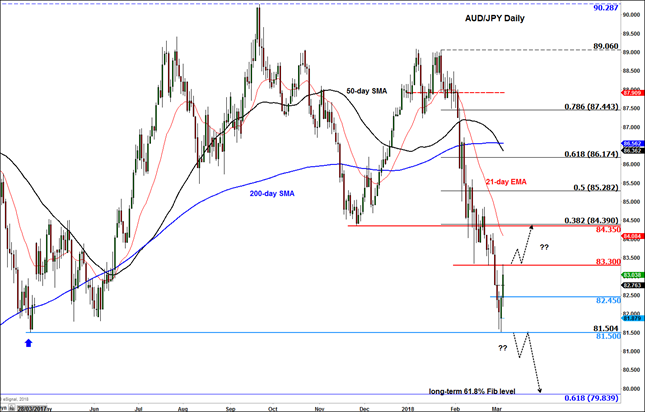