The Reserve Bank of Australia is widely expected to hold interest rates unchanged at the conclusion of its policy meeting in the early hours of Tuesday. Given the soft domestic inflation figures and what the RBA Governor Philip Lowe had said last week – that the central bank would not follow the footsteps of its counterparts’ recent tightening – it would come as no surprise if the bank comes across as more dovish than hawkish.

The Reserve Bank of Australia is widely expected to hold interest rates unchanged at the conclusion of its policy meeting in the early hours of Tuesday. Given the soft domestic inflation figures and what the RBA Governor Philip Lowe had said last week – that the central bank would not follow the footsteps of its counterparts’ recent tightening – it would come as no surprise if the bank comes across as more dovish than hawkish. Indeed, the recent strength of the Aussie may see the central bank actually talk down its currency. This outcome may be expected and as such it may not cause a lasting impact on the Aussie. The real surprise would be if the RBA were to show very little or no concern about the Aussie dollar’s recent strength. This outcome would be rather bullish for the AUD. The commodity currency has also been underpinned by the recent upsurge in key metal prices including copper and iron ore. So, it is not all about rate hike expectations, and this is something that the central bank might point out.

One key Aussie pair worth watching during the Asian hours is the AUD/NZD, which remains bang in the middle of its range in a side-ways market.  If the RBA doesn’t come up with any significant surprises then we expected the dips to be bought in this pair. But don’t expect the moon in this pair as the focus will then immediately turn to New Zealand employment figures which are due in the early hours of Wednesday NZ time (or Tuesday night for traders in the western parts of the world). New Zealand employment is expected to have risen by 0.7% in the second quarter versus 1.2% in Q1. The unemployment rate is seen falling to 4.8% from 4.9% previously.

Ahead of the RBA and New Zealand jobs figures, it is impossible to say where the AUD/NZD will be trading by the middle let alone end of the week. But what we can do is highlight a few key levels, around which price may oscillate and thus provide short-term opportunities. The fact that the AUD/NZD is stuck in a sideways market makes it an ideal play for day and short-term swing traders, rather than trend followers. Still, with the cross being above its 200-day average, the bias is slightly tilted to the bullish rather than bearish side. Among the key levels, 1.0590/95 has been a key support and resistance level in recent times. While this holds as support, the short-term bias remains bullish; if it breaks, the short-term bias would turn bearish. The longer-term bias would remain bullish for as long as the bullish trend line, around 1.0400, holds as support. Some of the short-term resistance levels to watch include 1.0735-50 area, followed by 1.0880/5 zone, levels which were formerly support. 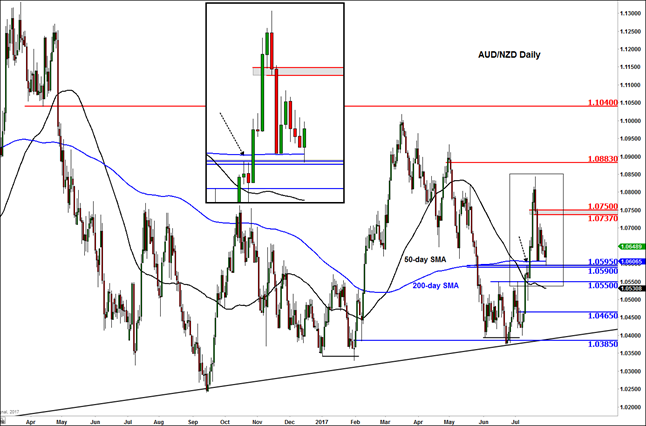