The New Zealand dollar has slumped in recent weeks, first on the back of poor NZ data and then after the RBNZ delivered a dovish policy statement, in which it suggested that monetary policy will remain accommodative for a long time. The Australian dollar has held its own slightly better, thanks mainly to firmer metal prices. As a result, the AUD/NZD has been able to climb higher. Unless something changes dramatically in the coming days, I think this cross will be heading further higher.

But the AUD/NZD has now arrived at a key technical juncture after the recent NZD selling. As can be seen, so far the rallies have been capped by a descending trend line stretching back to the summer of 2015 while the downside has been limited to an ascending trend line going back all the way to spring 2015. Within this long-term consolidation, the AUD/NZD has created several higher lows, but is yet to make a distinct higher high.

However that could change if the cross breaks out and takes out this year’s earlier highs of 1.1020. If and when that happens, the bias would turn decidedly bullish. Right now, it is neutral-to-slightly-bullish given that we are above the 200-day moving average. Short-term support sits at 1.0795-1.0805 area – if this level holds then we could see that breakout as early as this week. However if the support level breaks down then a return to the 200-day moving average cannot be ruled out. 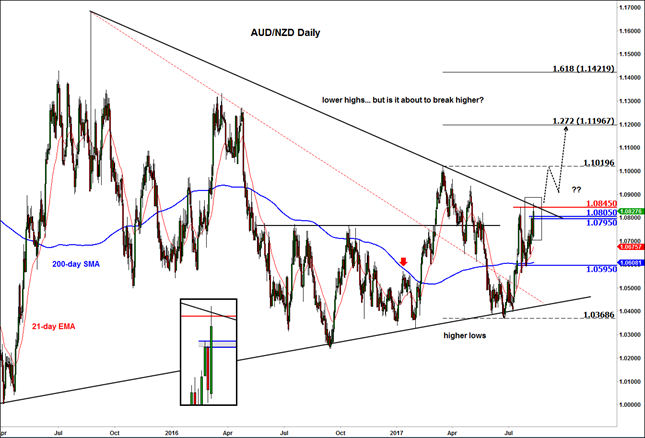