With data from Australia and its largest trading partner coming in stronger, it was a good day for the Australian dollar. However the AUD/USD didn’t find much joy because of the US dollar’s advance. But against other currencies, the Aussie’s strength was clearly evident, for example against that of its neighbour: New Zealand.

In addition to Trump’s speech, we had some important economic data out of Asia overnight. Specifically, from Australia and China. In Australia, the fourth quarter GDP came in at 1.1%. This was much stronger than 0.7% expected and more than made up for the surprise contraction of 0.5% in Q3. In China, both measures of the manufacturing sector PMI came in stronger with the official one printing 51.6 and Caixin 51.7 – both above the boom/bust level of 50. With data from Australia and its largest trading partner coming in stronger, it was a good day for the Australian dollar. However the AUD/USD didn’t find much joy because of the US dollar’s advance. But against other currencies, the Aussie’s strength was clearly evident, for example against that of its neighbour: New Zealand. The AUD/NZD thus rallied to climb to the top of its recent range at 1.0770. But is the cross about to take off?

Fundamentally, the Aussie looks more attractive than the Kiwi, at least on a relative basis. The RBA has turned neutral while the RBNZA has recently said there won’t be any rate changes until at least September – after the new government is formed – and that the next change will likely be a raise. The recent rise in some base metal prices is also supportive of the Aussie. The improvement in Chinese data is good news for both dollars, perhaps more so for the Aussie given their trade ties.

Technically, a low on the AUD/NZD looks to have already been formed, as evidenced for example by a couple of false break reversal patterns around 1.03-1.04 area. Indeed, the sharp rally away from that area point to institutional-level buying.  As a result of the up move, the 50-day moving average is set to cross above the 200, giving some momentum-chasing speculators the green light. Another, perhaps more important, trigger could be the potential break above the 1.0740-70 resistance area. If we get a clean break here then the re-test could be bought, potentially leading to further gains. I think that, as a minimum, the 1.1030 level would then become an attractive bullish objective. This level was the last support prior to the breakdown in May 2016.

In any case, I am bullish until and unless we see a distinct reversal signal. 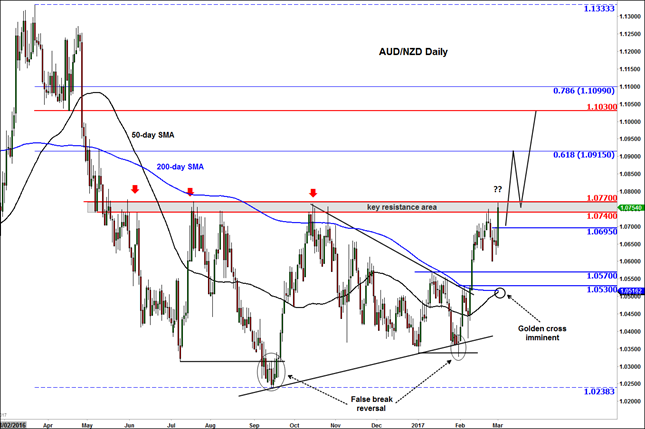