AUD/USD arrives at key support ahead of US CPI

Arguably the most important data for this week will be released later on today: US Consumer Price Index. Both headline and core CPI are expected to have risen 0.2% month-over-month in July. On a year-over-year basis, CPI is seen rising to 1.8% from 1.6% in June, while core CPI is expected to have remained unchanged at 1.7% last month.

Arguably the most important data for this week will be released later on today: US Consumer Price Index. Both headline and core CPI are expected to have risen 0.2% month-over-month in July. On a year-over-year basis, CPI is seen rising to 1.8% from 1.6% in June, while core CPI is expected to have remained unchanged at 1.7% last month. If the Producer Price Index (PPI) measure of inflation is anything to go by then CPI may also miss expectations. If so, the US dollar could resume its downtrend, which could underpin buck-denominated precious metals further in these times of heightened geopolitical uncertainty. Meanwhile with stock markets tumbling on Thursday, risk sensitive Australian dollar has been largely out of favour as investors sought safety in the perceived safe haven Japanese yen and Swiss franc. But the AUD/USD has now arrived at a major support level. So any dollar weakness or improvement in risk appetite could see this pair bounce back. The Aussie will remain in focus next week, too, as we will have key data from China in the form of industrial production on Monday, followed by Australian employment figures on Thursday.  So, the AUD/USD could be in for a wild ride, but in which general direction?

Given the breakout last month from its long-term range, one would have to remain bullish on the AUD/USD until proven wrong. When will the bulls be proven wrong? If and when the last swing low at 0.7570 breaks down. Admittedly, that level is miles away from where we are at the moment. But even in the short-term, the bulls will start sweating if some breakout levels first at 0.7335/40 area and then at 0.7700/10 start to break down. BUT if the trend is still bullish in the short-term then these breakout levels should turn into support. So, there is a potential we could see the low of the week and month form at 0.7835/40, a level which was already tested overnight. It may get re-tested once US inflation data comes out. But as long as we hold above 0.7335/40 are on a daily closing basis then the short-term trend would remain bullish. The long-term trend will remain bullish while price holds above 0.7570, in my view. 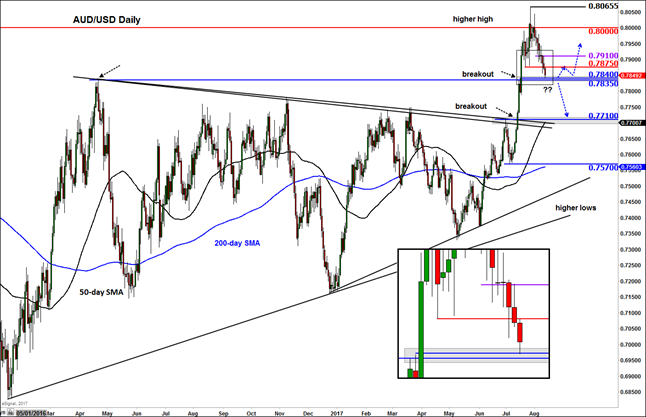