The US dollar is down for a second consecutive day after the US CPI became the latest measure of inflation to disappoint expectations on Thursday.

The US dollar is down for a second consecutive day after the US CPI became the latest measure of inflation to disappoint expectations on Thursday. In the greenback’s slipstream, metal prices have rallied which has helped to underpin the Australian dollar in particular. The AUD/USD has got an additional boost from the rallying AUD/NZD cross on the back of a dovish RBNZ, which weighed on the kiwi. The Aussie could extend its gains next week unless the RBA’s monetary policy meeting minutes on Tuesday convey a surprisingly dovish message or the Australian employment numbers on Thursday disappoint expectations. From the US, next week’s key data include retail sales on Tuesday and industrial production and some housing market data on Wednesday.

Meanwhile from a technical point of view, the AUD/USD may have formed a false break reversal pattern after the sellers struggled to hold it below the key 0.75 handle this week. As well as a psychologically-important level, this level marks the previous swing low from December. The failed breakdown attempt has already led to a sharp move in the opposite direction. Consequently, the AUD/USD has not only turned positive on the week, but it has done so on the monthly time frame as well (see the inset). Now that the AUD/USD is above the monthly opening price and around a technically important level, we may get some range expansion to the upside, particularly if short-term resistance at 0.7560 breaks and price holds above it. If so, there’s not much further resistance seen until the point of origin of the last breakdown at 0.7655, a level which may now turn into resistance. This bullish outlook will probably become invalid in the event the AUD/USD now goes back below 0.7500 on a daily closing basis. If that were to happen, then one has to question the validity of that false breakdown pattern. 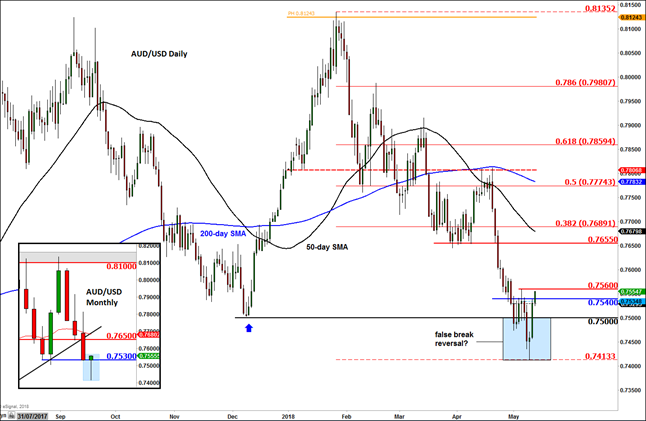