BOC unlikely to hike but Canadian dollar may rise nonetheless

The Bank of Canada is going to make a decision on whether to follow the US Federal Reserve and hike interest rates by 25 basis points when it concludes its meeting later on today.

The first major central bank announcement of the year is upon us. The Bank of Canada is going to make a decision on whether to follow the US Federal Reserve and hike interest rates by 25 basis points when it concludes its meeting later on today. Ahead of the rate decision, the Canadian dollar was up for the sixth consecutive day against the dollar and fourth straight day against the Japanese yen. The USD/CAD was trading around 1.3230 and CAD/JPY was hovering around 82.30 at the time of writing.

A few months ago, a rate rise in January looked very likely from the BOC. However, the probabilities of a hike have since fallen sharply, owing to the recent falls in global stock and crude oil prices — the latter being Canada’s major export commodity — and weakness in global and domestic economic data. Nonetheless, the Canadian dollar has surged back to life in recent days, along with other commodity dollars, crude oil prices and equity markets.

Sentiment towards risky assets, which includes the Canadian dollar, has improved markedly over the past several days, in part because of apparent progress in the US-China trade talks, among other factors. Yesterday, for example, US President Donald Trump tweeted that talks with China on trade were “going very well,” while today Bloomberg has reported that China has confirmed that the talks have now concluded, and a statement will follow soon.

Today, the Canadian dollar could extend its gains on the back of a surprise rate increase from the BOC, although we don’t think the central bank is going hike. Even so, the currency could remain supported if the Bank turns out to be hawkish about the prospects of future rate increases. However, if the central bank turns out to be surprisingly more dovish than expected, then the CAD could give up a big chunk of its recent gains.

One of the reasons why we think the BOC will hold rates unchanged today is because inflation in Canada has fallen noticeably in recent months. Just three months ago, consumer inflation stood at 2.4 percent. Now it has fallen to just 1.7 percent. With wage growth also weak, and not to mention oil prices, the prospects of a sudden jump in inflation seems unlikely. Against this backdrop, the BOC will most likely maintain status quo and hold the benchmark interest rate at its current 1.75% rate. Canadian interest rates have risen five times since the summer of 2017, with the most recent increase coming in October of last year.

Among the CAD crosses, the CAD/JPY looks very interesting after it formed a nice bullish reversal candlestick pattern (i.e. a hammer) on its weekly chart last week. Crucially, we have seen further follow-through to the upside at the start of this week, providing more evidence that the buyers are regaining control. So, as things stand, the path of least resistance is to the upside for the CAD/JPY. We continue to expect the dips to be supported, unless the BOC is very dovish today. Short-term support comes in the range between 81.80 and 82.00, followed by the point of origin of the breakout at 80.65. On the upside, I can’t see any major levels on the daily chart until 83.10/15, which also happens to be the mid-point of the drop from the October peak. Potentially a much stronger resistance zone is seen around the 200-day moving average, which at 84.90 seems miles away from here. 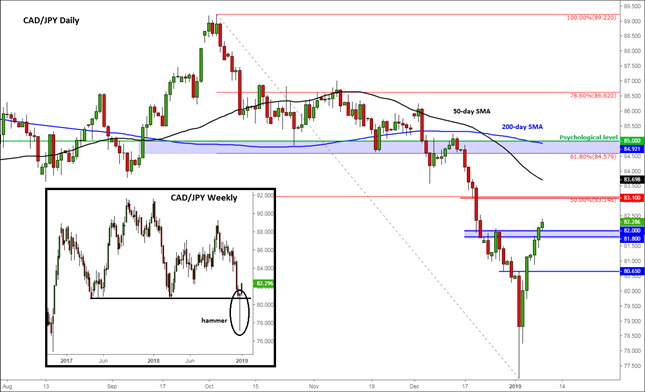