BoE fails to underpin GBP despite warning about rate rise

I can’t exactly say the markets were excited about the Bank of England’s “Super Thursday,” given the lack of any significant move in the pound ahead of the meeting. No one was expecting any changes to interest rates or QE, and so it proved.

I can’t exactly say the markets were excited about the Bank of England’s “Super Thursday,” given the lack of any significant move in the pound ahead of the meeting. No one was expecting any changes to interest rates or QE, and so it proved. But traders were waiting to hear any signs of subtle shifts in thinking among the rate-setting committee, either in the accompanying minutes or the quarterly inflation report. Well, they weren’t left too disappointed on that front, albeit as usual the Bank did deliver a mixed message overall. The BoE said the UK may need tighter monetary policy than the yield curve currently implies and re-iterated that it has limited tolerance for above-target CPI inflation. But the markets were left disappointed by the fact no other MPC member joined Kristin Forbes in voting for a rate rise. The pound’s fall was also exacerbated by the Bank’s assessment on household consumption, which it said is set to slow more than forecast in the near-term. However everything else was rather positive, with the BoE predicting real incomes to pick up and said Q1 GDP growth was likely to be revised up.

Ahead of the Bank of England’s Super Thursday, the pound had been slightly weaker anyway as traders responded to this morning’s release of disappointing UK economic data from the industrial sector. A 0.5% month-over-month contraction in industrial production in March was worse than expected and this was driven by a sharp pullback in manufacturing production, which fell 0.6% on the month. What’s more, construction output fell 0.7%, also worse than expected.  However, more up-to-date PMI data for the month of April has been positive on all sectors of the UK economy, including manufacturing and construction. Hence, the initial falls in the pound were contained.

As far as the GBP/USD is concerned, we have seen a slowdown in the bullish trend at or around key resistance in the 1.2950-1.300 area in recent days. As can be seen, this area was the last support zone prior to the drop that eventually led to the flash crash. Once support, it is now acting as resistance. This means therefore that if price were to eventually break higher, that would be a rather bullish outcome as it would confirm a break in market structure. For now though, the risk is to the downside and if today’s break below 1.2905 support is sustained then we may see over the coming days a pullback towards supports at 1.2835, 1.2775 or even 1.2595, where we have the 200-day moving average converging with the last broken resistance level. 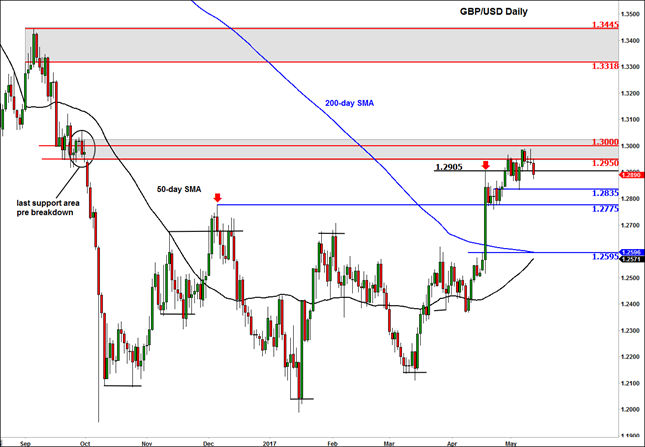