BOE Preview: Are we nearing the end of story?

With the 875 Billion Pound bond purchase target fast approaching, the BOE is going to have to do something

A long, long, time ago (the fall 2020), there was the Bank of England, who told banks to get ready for negative rates.  Then, all of the sudden in January, the BOE said that by telling banks to get ready for negative rates, they didn’t really mean to imply that they were going to actually bring rates into negative territory. While the UK was in lockdown, markets waited to see what the BOE would do next. At the March BOE meeting, the committee voted to leave rates unchanged at 0.10% and left their bond buying program unchanged at 875 billion Pounds.  The BOE meets again on May 6th.  Will they do anything this time?

As discussed in the Currency Pair of the Week, since the last BOE Monetary Policy Meeting, the UK has reopened non-essential businesses, outdoor pubs, and restaurants.  In less then 2 weeks, more restrictions will be lifted, including those on indoor dining and sporting events.  Prime Minister Boris Johnson said he expects all restrictions to be lifted by June 21st.  Nearly two-thirds of the population have had at least 1 jab.

The Problem and Choices

Here’s the main problem:  At their current pace of buying, the BOE is going to hit their bond buying target in the fall.  That leaves the central bank with 2 choices:

Will the BOE be less dovish or will they indicate that they are not even talking about tapering, as with the Fed and ECB. Some economists are expecting the BOE to do nothing and kick the can to the June meeting.  However, many believe that the MPC will announce that they will begin tapering soon, so as not to have to extend the 875 billion Pound target further!  An increase in strong economic data and an increase in tapering would most likely result in an increase in the value of the Pound.

Since the last BOE, the GBP/USD has been trading in a range between 1.3674 and 1.4010. 6 weeks after the last meeting, GBP is trading near the top of the range.  However, there is strong resistance above between 1.3940 and 1.4000.  Will the mention of “tapering” be enough to push GBP through the resistance? Support is lower at Monday’s lows of 1.3801 and then the 38.2% Fibonacci retracement from the early September lows to the February highs, near 1.3636.  Will a dovish BOE be enough to push the pair below? 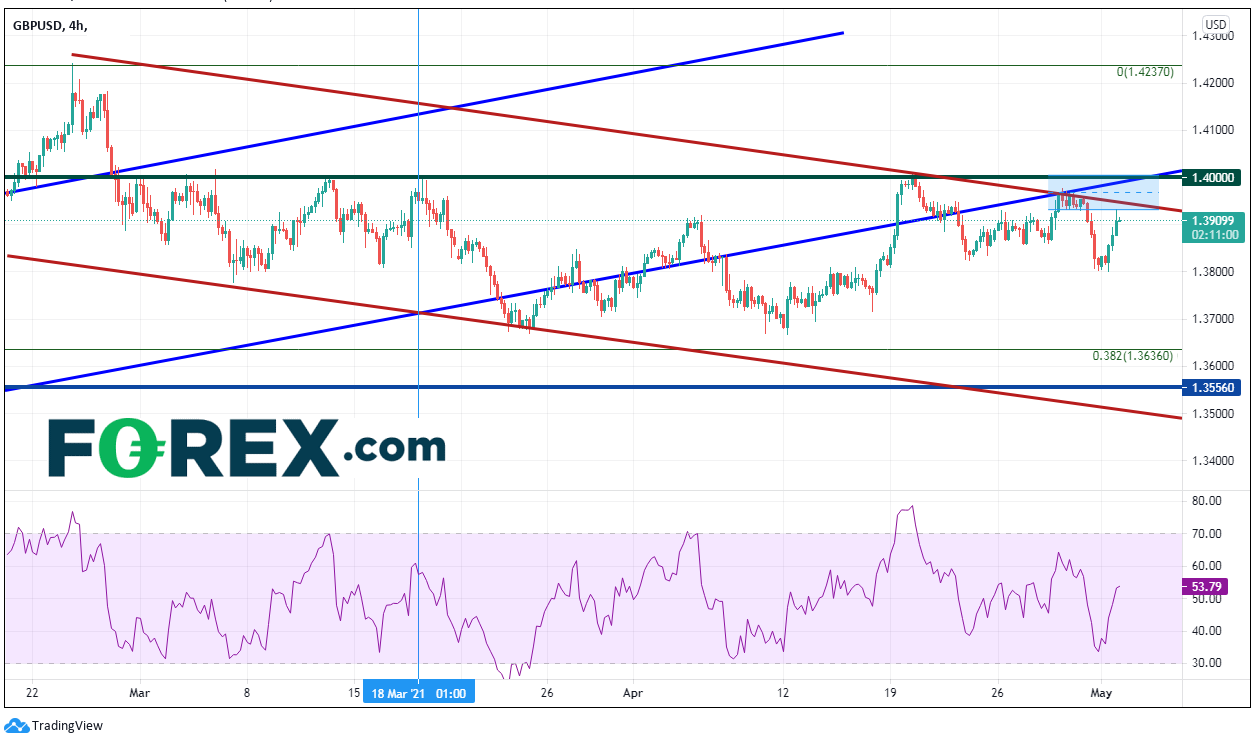 With the 875 Billion Pound bond purchase target fast approaching, the BOE is going to have to do something.  We’ll find out on Thursday whether they are going to announce some kind of tapering or wait for more economic data and kick the can down the road to the June meeting.