The BOJ was in the market defending the 10-year yield on the JGB at 0.25%, and they have announced that they will do it again for the next 3 consecutive days.

Recall that at the most recent Bank of Japan monetary policy meeting, the BOJ said it would continue with its monetary stimulus by targeting 0% on its 10-year bond yields.  Earlier, the central bank was forced to do just that as yields on the 10-year JGB approached the upper cap at 0.25%. And it wasn’t just once that the BOJ came into the market, it was twice.  The first offer to buy had no takers. However, the second time, the BOJ accepted bids to buy $524 million in JGBs.  In addition, in order to show it is serious, the BOJ said they would buy unlimited amounts of 10-Year JGBs at 0.25% for the next 3 consecutive days beginning Tuesday!

As a result of the ultra-easy monetary policy, USD/JPY went bid.  The pair reached a high today of 125.10 before pulling back.  This is the highest-level USD/JPY has been since the first week of August 2015, when the pair reached a high of 125.28.  USD/JPY had been in a long-term upward sloping channel dating to January 6th, 2021 when the pair made a low of 102.59.  After a year in the channel, the pair formed a rising triangle and on March 11th, USD/JPY broke above the top trendline of the triangle.  Price then continued above the top trendline of the channel at 118.00 and above a downward sloping trendline (green) dating to early 2002, near 121.10.  Horizontal resistance dating back to 2015 sits just above today’s highs at 125.28 and 125.61.  However, it if price breaks above, the next resistance level isn’t until 131.84, which is horizontal resistance from February 2002!  However, notice the RSI is in extremely overbought territory, an indication that the pair may be ready for a pullback. On the 240-minute timeframe, the RSI has been diverging with price since March 14th!  Horizontal support sits below at 122.40.  Below there is strong support at 121.10, which is the multi-year trendline and the 38.2% Fibonacci retracement level from the low of March 4th to today’s highs.  The next support is the 50% retracement level from the same timeframe, near 119.88. 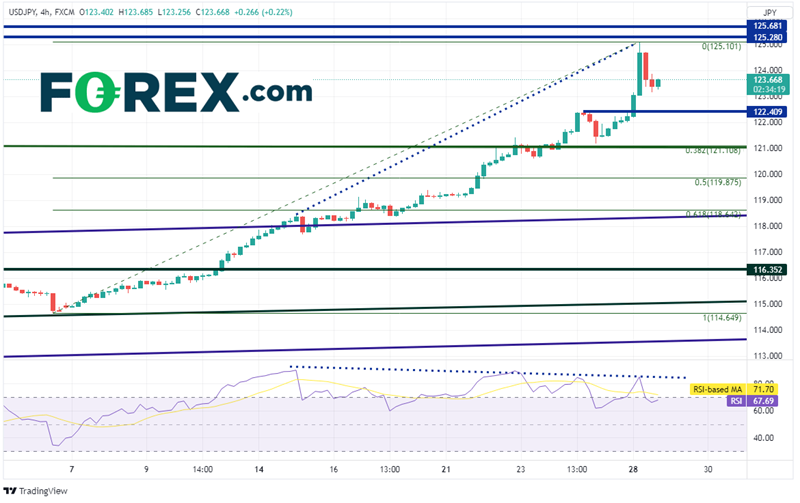 The BOJ was in the market defending the 10-year yield on the JGB at 0.25%, and they have announced that they will do it again for the next 3 consecutive days.  As a result, USD/JPY reached a high of 125.10.  Watch for more BOJ intervention, which could push the pair even higher!