Brent oil looks like it has managed to form a base – at least for the time being.

The price of oil has somewhat stabilised this week after falling sharply the previous week. My colleague James Chen yesterday summarised all the fundamental aspects of oil currently in play in his report HERE. I won’t repeat everything James has already written about, so will share with you my technical view on the Brent contract:

Brent oil looks like it has managed to form a base – at least for the time being. The reversal started on Tuesday, when oil prices fell for a time below Monday’s range, before closing the day above Monday’s high. Brent and WTI both managed to reclaim their technically-important 200-day moving averages. Brent also managed to hold its own above its long-term trend line (see the weekly chart for details). Thus, Tuesday represented a key reversal day as the previous selling pressure turned into apparent buying. However, there has been little further follow-through in the buying pressure thus far in the week, underscoring fundamental worries. Nevertheless, it looks like the slide is over and oil prices may be able to stage a more noticeable recovery in the coming days. At this stage though we will take it from one level to the next, as this could turn out to be just a pause. So, the next potential levels of resistance are at $53, followed by $54 and the $55. These levels were the previous support levels, which could very well turn into resistance upon re-test.

This potentially short-term bullish outlook on oil would become invalid however if Brent were to break to fresh yearly lows. In this scenario, Brent may drop to test the long-term 61.8% Fibonacci retracement level at $49.20/5 next. The 78.6% Fibonacci level is 25 cents below the $74 handle. Those are among our immediate bearish objectives IF Brent breaks this year’s low, hit on Tuesday at $50.30. 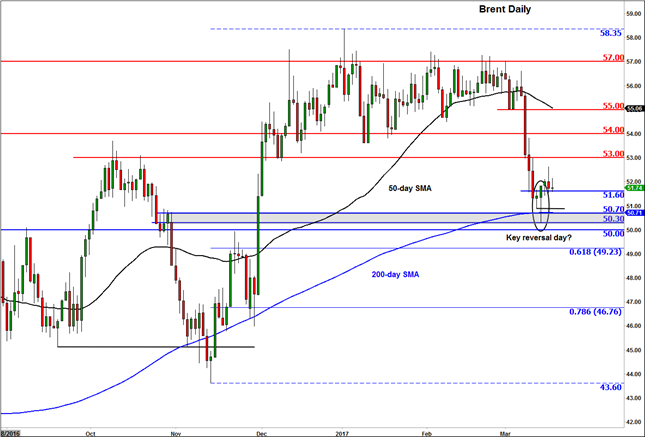 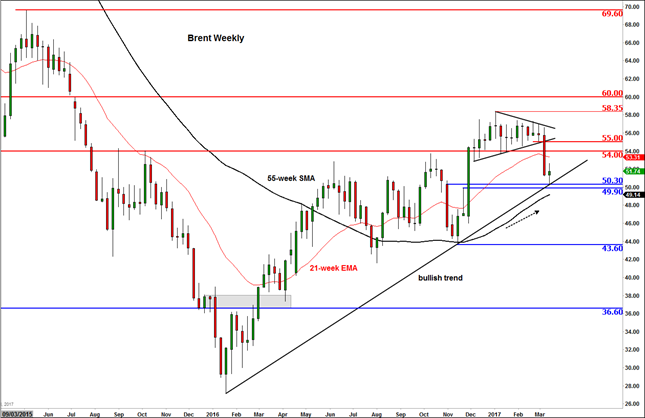