Brexit deal fails to lift GBP/USD ahead of NFP, busy next week

After a hiccup at the start of the week, the UK government has finally struck a deal with the EU to move Brexit talks on to the next phase.

After a hiccup at the start of the week, the UK government has finally struck a deal with the EU to move Brexit talks on to the next phase. This ends months of negotiations, but in the end there won’t be a "hard border" in Ireland while the rights of the EU citizens in the UK and UK citizens in the EU will be protected. The estimated cost of the divorce bill will be about £35-£39 billion, which is less than £50bn that the EU was holding out for but still a considerable amount given that this was not something any voter was ever told about last year – not that it will change anything now.

The GBP/USD, already higher in anticipation of the Brexit deal being achieved, was again unable to climb decisively above 1.35 and at the time of this writing it was flat on the day as the US dollar pushed higher across the board. Still, with talks on post-Brexit trade between UK and EU to go ahead now, a major obstacle has been cleared and this should be pound positive longer term – if not against the dollar then certainly against a weaker rival. Indeed, next year could see sterling make a more noticeable recovery as there’s a good chance for UK wages to go up, putting further upward pressure on inflation which is already well above the Bank of England’s target. As more Europeans probably move back to their home nations due to Brexit, net immigration could fall, reducing the supply of work force, thereby pushing up wages.

NFP in focus as head of key next week

UK investors’ focus will return to domestic economics next week when we will have the latest UK CPI (Tuesday), wages (Wednesday) and retail sales data, along with the Bank of England’s rate decision (both on Thursday). If the UK economy continues to show signs of strength at a time when Brexit negotiations are finally moving in the right direction then the pound could be on the verge of staging a more significant recovery. But with regards to the GBP/USD pair, there is the other side of the equation one has to consider too. The US dollar has been falling throughout much of this year, but with the tax reform bill almost making it into the law, the dollar has started to go higher in recent days.  The immediate focus is now turning to US jobs report, due to be released in the next couple of hours. If nonfarm payrolls and wages growth turn out to be stronger than expected then this could put downward pressure on the GBP/USD. However a weaker NFP report could send the cable surging higher, given the Brexit breakthrough. Next week will also be important for the dollar as will have US CPI and the FOMC to look forward to (both on Wednesday). So, the GBP/USD will be facing a very important week.

From a technical point of view, the cable is consolidating inside converging trend lines ahead of the abovementioned fundamental events.  A clean break above the 1.35 resistance level is required if we are to see a run above September’s high at 1.3650. Our subsequent long-term bullish objectives remain at 1.3835-50 followed by 1.4000-50 area. The former corresponds with the convergence of the long-term 61.8% Fibonacci retracement level (not drawn on the chart) and the February 2016 low, while the latter is the pre-Brexit low and a psychologically-important handle.  Short-term support levels come in at 1.3445, 1.3320 – the bias would turn bearish if this level were to break. 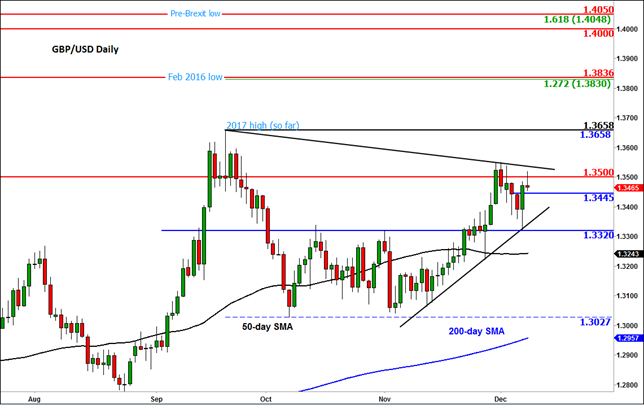