News of the explosions in Brussels has unnerved investors today with the major European indices all trading lower and safe haven gold higher, though both assets are off their daily extremes. Indeed, the precious metal has so far only found moderate support from this source. It would require a more significant sell-off in the stock markets to materially damage sentiment and therefore prop up the metal. Given that this is a shortened trading week and there are not many significant US economic data scheduled in the coming days, we may not see much volatility in the buck-denominated gold and indeed other financial markets. However, the lower expected volumes should in theory make the markets more vulnerable to sharp moves and more headline-driven.

Looking at the 4 hour chart of gold, below, and we can observe some mixed signals. After the recent strong rally, gold has been putting in a few lower highs and has broken below a short-term bullish trend line. The doji candle that was formed at the highs around $1275/83 area is still influencing traders’ decisions as it could be that the metal may have peaked there. Consequently, the rallies have ended prematurely in recent days and a bearish trend line has been established. Added to this, the 50-period moving average has flattened and is pointing slightly lower now. However, the bulls would argue that gold has been fairly resilient, shrugging off the recent rally on Wall Street. What’s more, the pullback from the highs has not been too significant, which suggests that the bulls remain in charge and that this could just be a pause before the metal resumes its rally. Indeed, consolidation through time is more bullish than through price. This allows the momentum indicators such as the RSI to unwind from "overbought" levels without much depreciation in the underlying market, in this case gold. Once short-term momentum indicators reach oversold conditions, this may encourage the bullish speculators to step back in.

As the bulls and bears battle it out, conservative traders may wish to wait for gold to either break a key short-term support level, such as $1245, or a resistance, such as the $1250-$1262 range, before taking a view on the metal. If the support level breaks down decisively then gold may drop to test the next reference point at $1230. If the latter also breaks down then the next stop may well be all the way down around the $1190 to $1200 range, which was previously support and resistance. Conversely, if gold manages to break through the abovementioned $1258-62 resistance range and the bearish trend line then a rally towards the next potential resistance at $1275 or higher could become very likely. On the daily chart, price action has been looking very bullish of late, with the 50-day moving average, for example, recently crossing above the 200 to create an aptly-named "Golden Crossover". So bear that in mind when trading gold. 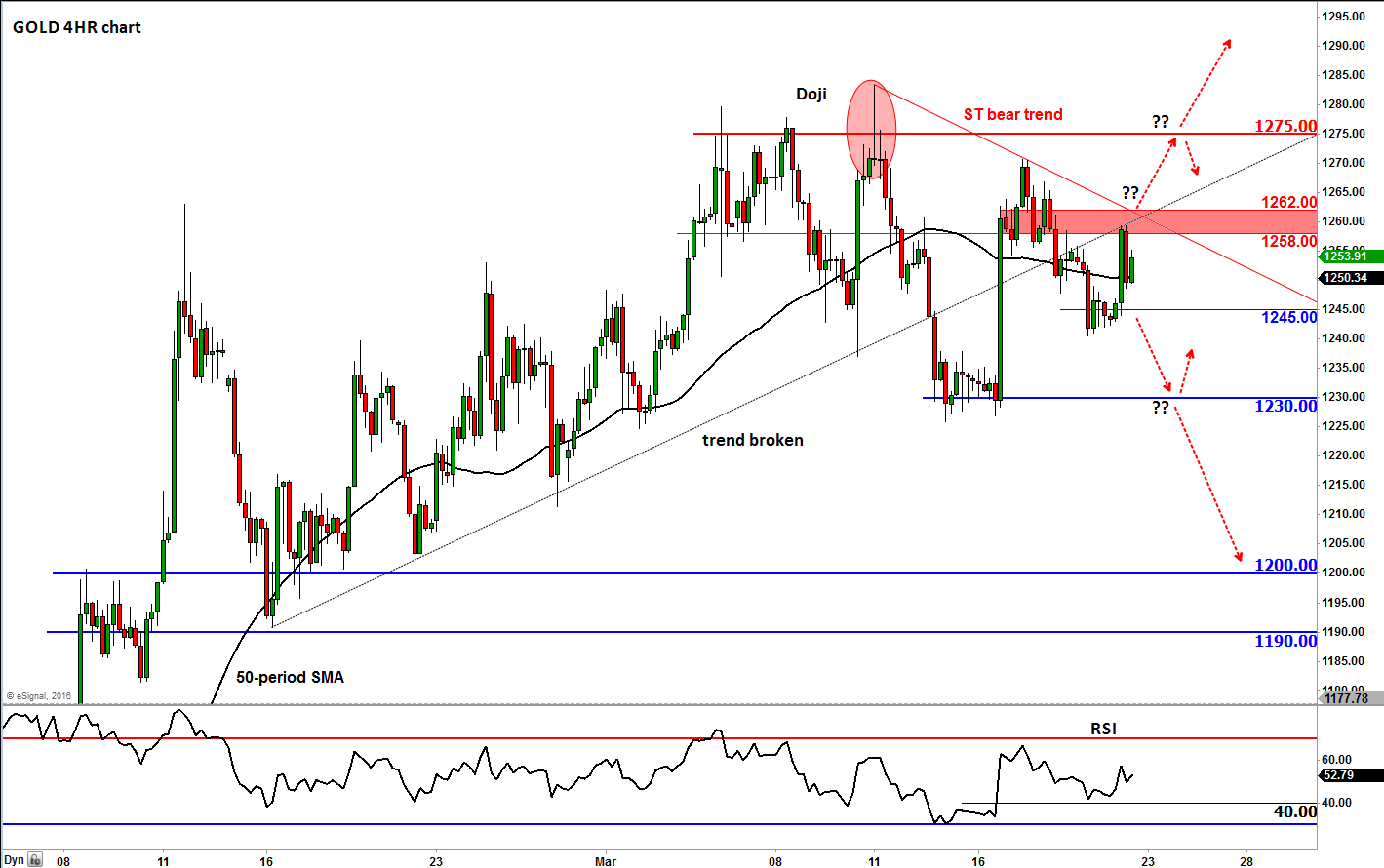