Today’s weaker-than-expected UK inflation figures follow the slightly disappointing wages data we saw yesterday and as a result, the pound is falling for a second consecutive day.

Today’s weaker-than-expected UK inflation figures follow the slightly disappointing wages data we saw yesterday and as a result, the pound is falling for a second consecutive day. As we had suspected, the FTSE's selling on Monday saw no further follow-through and the index has now hit a new high on the week, no doubt supported by the weaker pound.

Investors are probably wondering whether the Bank of England will still hike interest rates next month. Headline CPI unexpectedly dropped to 2.5% year-over-year in March from 2.7% the previous month, while core CPI eased to 2.3% from 2.4%.

While still above the BoE’s 2% target, inflation has again undershot the MPC’s forecast of 2.8%. This is a big discrepancy, make no mistake about it. The stronger pound is probably weighing on inflationary pressures more than the MPC had predicted.

Still, we doubt that the BoE will refuse to hike interest rates next month, though the chances of it doing so have definitely fallen slightly. Indeed, the implied probability of a rate rise in May fell to a still-high 80%, down 4 percentage points from the day before. That’s according to Bloomberg, whose calculations are based on overnight indexed swap data.

The important thing as far the pound is concerned is that it has moved further away from the level we mentioned yesterday at 1.4345.

This was the previous 2018 high and the fact that the buyers have been unable to build a base there is and has been bearish.

With supports at 1.4285 and 1.4230 also broken, the bears’ control has grown. The sellers now need to defend these levels on a potential retest.

The next key support is at 1.4100, the base of the most recent breakout. The long-term outlook would only turn bearish if we go back below the psychologically important 1.40 handle, for then we will have created a lower low.

But IF and when the cable manages to reclaim the 1.4345 level then this would re-establish the bullish bias, unless we see a significantly bullish pattern emerge at lower levels first. 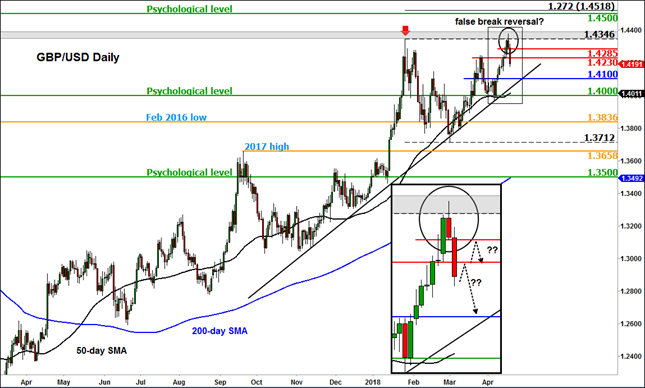