Major central banks around the world, except for the BOJ, are in tightening mode on the back of increasing inflation.

In this article we will look at the Fed, BOE, ECB, BOC and BOJ. Where does each bank currently have monetary policy set and where are they likely to move rates to at their next meeting?

The US Federal Reserve currently has rates set at 1.75% after raising rates by 75bps at its last central bank interest rates decision meeting.  After an 8.6% YoY CPI reading for May and higher inflation expectations, the Committee decided that a 75bps rate hike was appropriate.  However, the FOMC isn’t done yet.  In the press conference which followed, Fed Chairman Powell said that although he doesn’t expect a 75bps hike to be common, the FOMC will be deciding between 50bps and 75bps at its July meeting.  The Committee is highly attentive to inflation risks and sees risks to the upside.  On June 22nd, Powell testified in front of the Senate Banking Committee and echoed the following statements from the June interest rate decision meeting:

According to the CME’s Fedwatch tool, markets are expected an 88.5% chance of the Fed raising interest rates by 75bps to 2.50% at the July meeting: 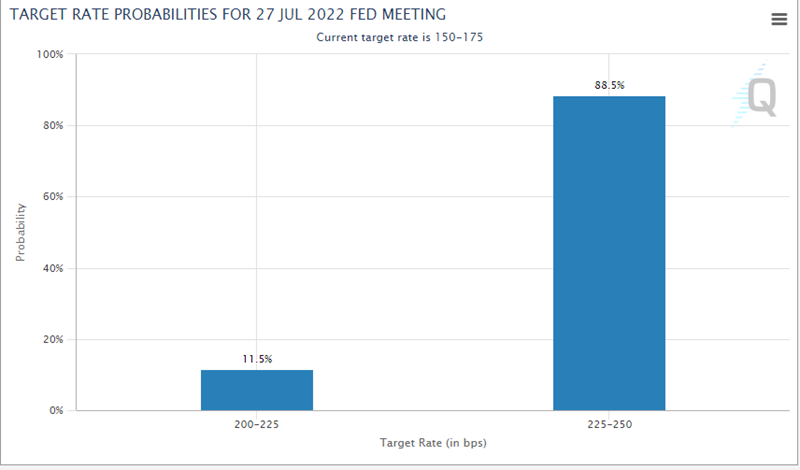 The Bank of Canada currently has interest rates set at 1.5% after raising rates by 50bps at its last central bank interest rate decision meeting.  The main cause for concern: rising inflation.  Th BOC noted in its statement that inflation “will move even higher in the near term, before beginning to ease”, particularly in food and energy.  Indeed, the CPI print for June was 7.7% YoY vs an April reading of 6.8% YoY.  This was the highest reading since January 1983!  Core CPI for June was 6.1% YoY vs 5.7% YoY in April. The central bank also noted that “Canadian economic activity is strong, and the economy is clearly operating in excess of demand.  Therefore, the Governing Council judged that interest rates will need to rise further.  In addition, the statement said that members are ready to “act more forcefully” if needed to meet the 2% inflation target.  The BOC will also continue it quantitative easing tightening measures by continuing to rundown its balance sheet. Current expectations are for an interest rate increase of 50bps at its July meeting, however a 75bps hike is also under consideration.

The Bank of England currently has rates set at 1.25% after raising rates by 25bps at its last central bank interest rate decision meeting. It was the 5th consecutive rate hike in a row. The BOE noted that it sees inflation at 11% in October, and over 9% over the next few months.  On June 22nd, the UK released its May CPI print at 9.1%, inline with expectations.  The central bank recently said that it now sees Q2 GDP at -0.3% vs +0.1% previously.  This is in line with the worse than expected economic data that the UK has released recently, including Manufacturing Production, Industrial Production, and the change in the Claimant Count.  The BOE fears higher inflation, as it is concerned about the effect it could have on household incomes.  Therefore, members are hesitant to raise rates aggressively. However, the statement also included that it will act forcefully, if needed.  In a recent speech, the BOE’s Pill emphasized the phrase “if needed” from the statement.   Watch for the BOE to cautiously look to raise interest rates by 25bps at a clip until growth picks up.

The European Central Bank currently has rates set at -0.50% after leaving them unchanged at the June interest rate decision meeting.  However, the ECB did pre-commit to a hike of 25bps at the July meeting, with some ECB members speculating that it may be 50bps. After a final May reading of 8.1% YoY CPI, the ECB is concerned about fragmentation of countries within the Eurozone when it starts raising interest rates next month.  Therefore, on June 15th, the ECB held an extraordinary meeting to discuss the recent rise in peripheral countries interest rates vs those of the core countries.  The result was two-fold:

The Euro Area releases its June CPI preliminary print on July 1st.  This may help the Committee decide whether it should raise rates by 25bps or 50bps at its July meeting.  In addition, look for clarification on the anti-fragmentation tool.

USD/JPY is at 24-year highs.  Despite this, the Bank of Japan currently has rates set at -0.1% after leaving them unchanged at the June interest rate decision meeting.  In addition, the central bank said that it will continue with its yield curve control and daily bond purchases.  Also, the Committee said that it would continue to buy unlimited amounts of bonds to defend the 0.25% cap on the 10-year JGB.  The BOJ said that it expects CPI (ex-fresh food) likely remain around 2%, though high uncertainties persist, specifically those linked to the coronavirus in Japan and the Russia/Ukraine War.  BOJ Governor Kuroda was also very specific to add that the central bank will take additional easing steps as needed.   This is contrary to most other central banks around the world, which are currently tightening monetary policy.  Japan will release its May CPI data on Friday.  Expectations are for 2.3% YoY vs 2.5% YoY in April.  The BOJ meets again on July 21st, and unless inflation rises dramatically, expect the BOJ to remain on hold once again. 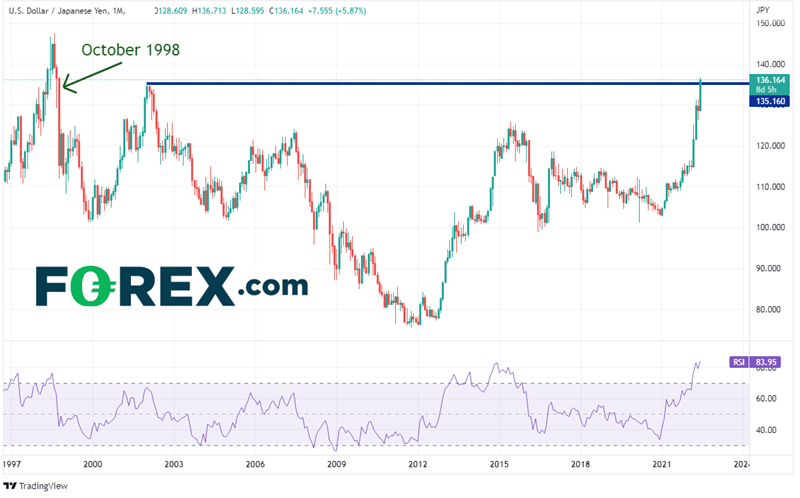