Over the weekend, ECB President Christine Lagarde blogged about monetary policy in the Euro Area.  The usually dovish-leaning Lagarde summarized her opinion by noting that because the inflation outlook has shifted notably upward, she expects net purchases under the Asset Purchase Plan to end very early in the third quarter (to be announced at the June ECB meeting?). She added that this would allow the ECB to lift rates at the July meeting and likely to exit negative interest rates by the end of the third quarter (September meeting?).  After that, the ECB would bring interest rates in line with a neutral rate based on the medium-term outlook of inflation.  In addition to Christine Lagarde’s comments, the German Ifo Business Climate for May released today was better than expected at 93, vs 91.4 expected and 91.9 in April.  The current conditions component was much stronger at 99.5 vs 97.3 prior while the expectations component was similar at 86.9 vs 86.8 in April.

On a daily timeframe, EUR/USD had been trading lower in an orderly downward sloping channel since May 2021, when the pair reached a higher of 1.2262.  However, on April 22nd, EUR/USD broke aggressively below the bottom trendline of the channel, near 1.0753, and fell within 9 pips of the 2017 lows at 1.0340 on May 13th.  Notice that the RSI was diverging with price as EUR/USD tested the 2017 lows, a sign that the pair may have been ready to move higher.  Since then, the pair has bounced and is currently retesting the bottom trendline of the long-term channel. 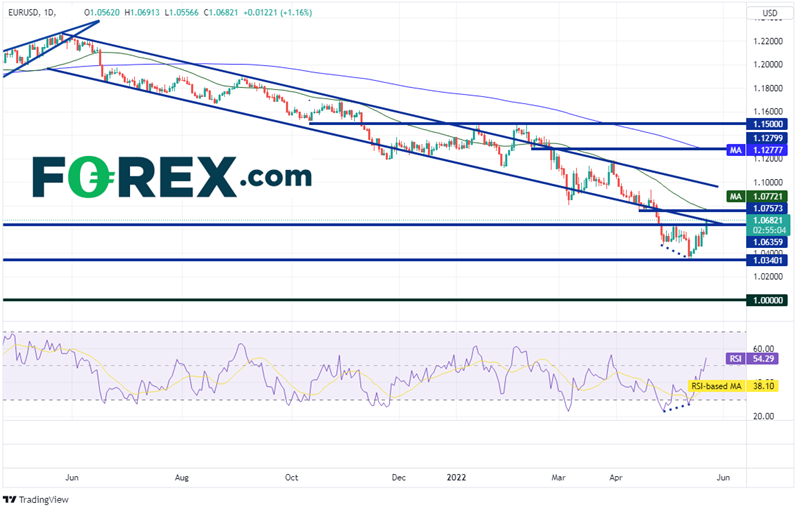 On a 240-minute timeframe, EUR/USD has broken above the 38.2% Fibonacci retracement from the highs of March 31st to the lows of May 13th at 1.0668 and is testing horizontal resistance, the bottom, downward sloping trendline of the long-term channel, and the psychological round number resistance at 1.0700.  Above there, price can run to a confluence of resistance between the April 14th lows at 1.0757 and the 50% retracement from the above-mentioned timeframe at 1.0766.  The next level of resistance is the 50 Day Moving Average near 1.0772.  However, notice on the shorter timeframe that the RSI is in overbought territory, an indication price may be ready to pullback.  Horizontal support sits below at 1.0683 and 1.0506.  Below there, price can fall to the May 13th lows of 1.0349.

With Christine Lagarde laying the groundwork for upcoming ECB rate hikes, EUR/USD has continued its recent bid higher.  Throw in the better than expected German Ifo, and EUR/USD has rallied over 100 pips on the day.  Can it continue?  It will if the pair can break through 1.0700 and the RSI on the 240-minute timeframe can unwind into neutral territory!