It hasn’t been a good day for commodities with gold, silver, copper and oil all falling sharply. Copper has been hit the hardest, followed by silver. The metals have been weighed down in part because of the stronger US dollar, which has risen to its highest level since March 21 against the Japanese yen. The US currency last week hit new highs on the year versus the major commodity currencies: the Canadian, Australian and New Zealand dollars.

It hasn’t been a good day for commodities with gold, silver, copper and oil all falling sharply. Copper has been hit the hardest, followed by silver. The metals have been weighed down in part because of the stronger US dollar, which has risen to its highest level since March 21 against the Japanese yen. The US currency last week hit new highs on the year versus the major commodity currencies: the Canadian, Australian and New Zealand dollars. But the greenback has weakened noticeably against the euro and the pound; these currencies have meanwhile risen very sharply against all of their own rivals. Because of the strength of the pound and especially the euro you wouldn’t really notice the dollar’s strength if you only looked at the Dollar Index, as the single currency has a disproportionally large 57.6% weighting in the DXY. But the greenback could make a comeback even against these currencies in the event today’s FOMC statement is more hawkish than expected. If so, dollar-denominated commodities could fall further. Conversely, a more dovish statement could weigh on the dollar, which in turn could boost dollar-priced metals.

In addition to a stronger dollar, precious metals have been weighed down by the on-going “risk-on” trade, with equity indices in Germany, UK and US being at or near record high levels. In addition, copper and silver, widely used in industrial processes, have fallen on expectations of weaker demand from China after manufacturing PMI data from the world’s second largest economy came in weaker-than-expected earlier this week.

As far as crude oil is concerned, it had been expected we would see a sharp drawdown of around 3.3 million barrels in weekly US oil inventories. After all, a 4.2 million barrel decline is what the API had predicted last night. However, the official EIA headline figure, released earlier today, showed only a 0.9 million barrel drawdown. This was well off the mark and as such bullish speculators were left disappointed again. Despite the miss, though, this was still the fourth oil inventory decline in as many weeks. Out of the past four weeks, two of the inventory reductions had been more pronounced, one in line, and this one lower than expected. So on average, oil inventories have been declining over the past four weeks by roughly expected amounts. At these levels, we are on the lookout for bullish price patterns to emerge on the charts of Brent and WTI.

But for now sentiment remains quite bearish on oil, and indeed metals. The only thing that could ‘save’ dollar-linked commodities now is if we see a sharp drop in the greenback, say as a result of a dovish FOMC statement tonight or a disappointing jobs report on Friday.

From a technical perspective, copper’s failed rally from Monday and the follow-through in selling means there isn’t a lot we can say about it from a bullish point of view. The next support area for copper is around 248.00-250.50 where prior support meets the still-rising 200-day moving average. Below here, there’s not much further support until the 61.8% Fibonacci level at 236.50. Old support levels such as 260 could turn into resistance. Bullish speculators may wish to wait for copper to form a reversal price pattern before potentially getting on board. 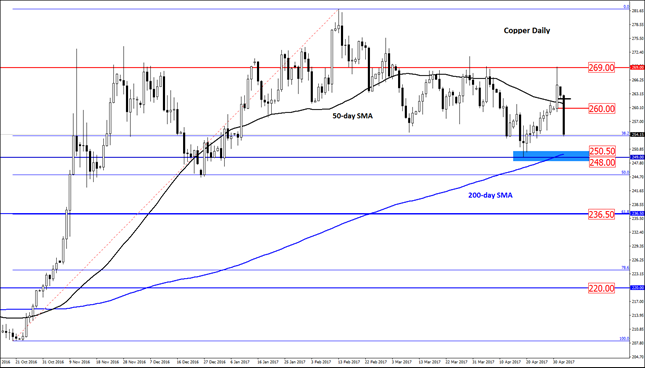