Could EUR/USD rise from the ashes?

Sentiment has been dominated in recent times by political turmoil in Italy, which took another twist at the weekend following the breakdown in the coalition between the Five Star Movement and the League.

Sentiment has been dominated in recent times by political turmoil in Italy, which took another twist at the weekend following the breakdown in the coalition between the Five Star Movement and the League. It came after Italy’s President, Sergio Mattarella, on Sunday vetoed a euro-sceptic choice for economy minister, opting instead to ask ex-IMF economist, Carlo Cottarelli, to form a temporary government. As a result, the prospects of a quick return to the polls just 12 weeks after latest elections, look increasingly likely.

Investors don’t like increased uncertainty, not when there is increased risk of a country leaving the euro. So, Italian bonds, stocks and the euro have all sold off further at the start of the week. The cost to protect against a default on Italian debt has risen sharply, as has the spread between the German and Italian yields.

Mr Cottarelli has indicated he will hold new elections by early next year, but the prospect of an earlier vote is likely should he fail to pass a programme to parliament. In this event, the government would resign immediately and new elections will be held in early September. This would work in the two populist parties’ advantage who will likely rally support behind their claim that the Italian and the European establishments are preventing the will of the people.

Is the Italian sell-off overdone?

But with a temporary government looks set to take charge of Italy, we think this will alleviate some pressure on Italian and European assets in the short-term. So, we reckon a recovery for the European indices, bonds and possibly the euro could be on the cards this week.

As far as the EUR/USD is concerned, it faces additional risk of further dollar appreciation with the buck going up against all major currencies of late except the safe haven yen and gold. The dollar will be in greater focus towards the end of the week when the latest US jobs report is published on Friday.

However, with both the Italian sell-off and dollar buying may well be overdone in the short-term. Indeed, the momentum indicator RSI is at severe oversold levels of below 20 as the EUR/USD probes liquidity below the prior swing low of 1.1555. With the market being so stretched, we are on the lookout for the latecomers to get stitched up. In other words, we are now on the lookout for a false break reversal to potentially form here. If the EUR/USD closes the day well above 1.1555 then we will have a hammer-like or even a bullish engulfing candlestick pattern on the daily time frame. This could very well be the reversal pattern that we are looking for. However, if rates close well below 1.1555 then in this scenario, we will look for further weakness towards 1.1500, if not lower. 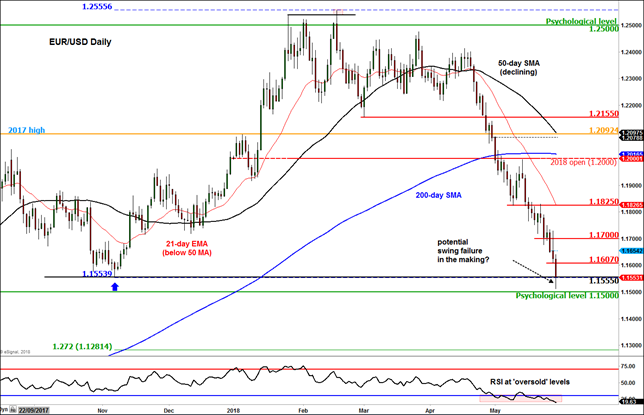