Gold: could precious metals bounce back?

The dollar does appear a little overbought in the short-term outlook. A rate rise next week is basically priced in. That doesn’t mean the dollar should weaken, but equally one can argue that there is no reason for it move significantly further higher without a pause at the very least. The US jobs report on Friday poses a key risk to the dollar and in the event we see a surprisingly weak number then the odds for a rate increase may weaken significantly. Given that possibility, speculators may ease off the gas a little.

In addition to the impact of potential weakness in dollar, gold may find support in the event of a stock market correction. This could become a possibility if the US indices break below some significant support levels. On the S&P 500, for example, 2366/7 represents a key support area in that it was the last resistance prior to last Wednesday’s big upsurge. If this level were to break down decisively, it may trigger profit-taking and short selling response from market participants. This could in turn boost the appetite for perceived safe haven assets such as gold, silver and yen. The resulting weakness in the USD/JPY may weigh on the Dollar Index, which in turn could support dollar-denominated precious metals even further.

Well, that is all good in theory, in reality it may not pan out that way. Nevertheless it is a possibility and we shouldn’t fixate on the idea that gold and silver will simply fall further because of what’s happened since last week. That being said, gold is yet to show any signs of support and for now at least the path of least resistance remains to the downside. Thus, it appears likely that the metal may drop to test the $1200 level again in the coming days, provided that intermediate support at $1217/20 area gives way. This level was being tested at the time of this writing. 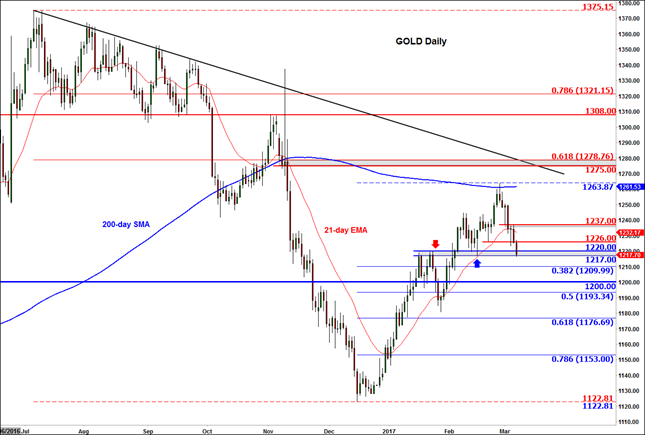