It will be a bit of a quieter week on the data front this week, ahead of next week’s busy schedule when we will have a plethora of central bank meetings, including the BoE, BoJ and the Fed, plus lots of key data such as the US monthly jobs report.

It will be a bit of a quieter week on the data front this week, ahead of next week’s busy schedule when we will have a plethora of central bank meetings, including the BoE, BoJ and the Fed, plus lots of key data such as the US monthly jobs report. All of that will come ahead of the November 8 US presidential election. So there’s lots to look forward to in the coming weeks. This week, the focus will be largely on company earnings: from the US, tech giants Amazon, Apple, Google and Twitter will be among the companies reporting their results, while in the UK it is the banks that will take centre stage.

So we could see some increased volatility in the stock markets. So far, it has been a decent earnings season in the US, with banks in particular doing well. But it will only take a few disappointing numbers from bellwethers like Apple to turn sentiment sour. Now, with the Dollar Index being at a 7-month high and potentially on the verge of going to and probably beyond 100 soon, this bodes ill for the stock market bulls. Indeed, the impact of the appreciating US dollar on future earnings is among the key risks facing corporate America. In anticipation of weaker earnings in Q4 and beyond, investors may hold off from aggressively buying stocks now and may be quick to take profit on those that beat their results in this reporting season. So, just because Apple and co may report strong results this week, the Wall Street rally could still derail (after a potential dead-cat bounce) once the dust settles.

But let’s not get too bearish yet as so far the markets are still near record high levels, thanks to the still-low government bond yields that are depressed by global central bank’s race to the bottom on low and negative interest rates. What’s more, none of the key support levels have broken down on the S&P 500 yet, so the bulls are still edging it slightly. That being said, this summer’s breakout above the previous all-time high of 2134/5 area has not been a convincing one. The lack of a significant bullish follow-through suggests to me that the markets are fatigued and that a deeper pullback may be required to raise the appeal of stocks at these historic high levels.

The S&P 500 achieved a new record high at 2193/4 in mid-August but since then it has been trading in a range, mostly lower. The S&P has dropped to test the point of origin of the breakout at 2120 and the prior record high of 2134/5 several times now. So far, the buyers have stepped in, as you would expect, to push the market back into the range. However the bounces have been shallower each time. Now the more a level is tested, the more likely it is that it will break in the direction of the test. So, if the S&P were to test the 2120 support level again, it may fail to bounce this time.

Last week’s bounce helped to form an inside bar formation on the weekly chart. In bullish market conditions, this pattern usually forms before the rally continues. However when the markets are in reversal, this pattern tends to fail and traps those who are still bullish. Thus a break back below 2145/48 area (previously support and the high from last week’s inside bar formation) would be a bearish outcome in the short-term. It will be even more bearish if the index goes on to also break below the next key support at 2120.

But as mentioned, for now the bulls are still hanging in there given that we are back above the 2145 resistance (old support/resistance) level.  This group of market participants will now want to see a clear break above the next resistance at 2170. 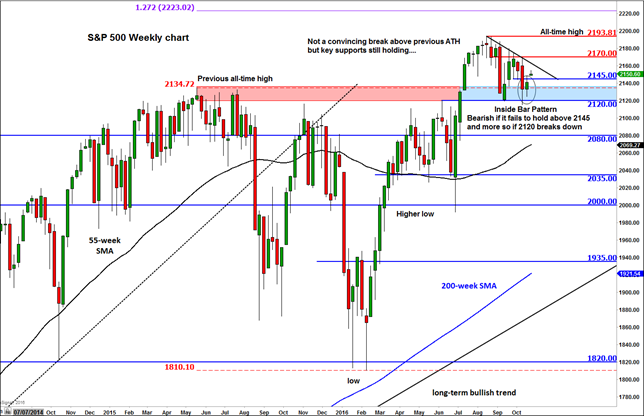