Crude eases ahead of $50 hurdle

After another typically volatile 5-day period, both oil contracts ended higher for a second straight week. On Friday however, oil prices fell and they have extended their declines at the start of this week.

A combination of factors had helped to support oil prices over the past couple of weeks, chief among them being the unscheduled production outages in places like Canada and Nigeria. What’s more, demand for crude products in the US remained strong, as evidenced for example by sharp draws in gasoline and distillate stocks in the prior week. With total US crude supply having fallen for 16 out of the past 17 weeks, traders realised that the oil market could become a lot tighter and sooner than expected.

That being said, prices do appear overbought in the short term and the impact of temporary supply factors could end at any time. Indeed, the wildfires in Canada appear to be under control now thanks to cooler temperatures and rainfall in recent days. The evacuation orders have been lifted and oil workers can return. But it could still take a number of weeks to return crude outages of more than 1 million bpd back to normal levels, meaning the supply deficit from Canada will likely be in place for a while yet. This may be reflected in lower US oil imports in the weekly EIA data.

OPEC unlikely to announce any changes

But given the sharp price gains of late and ahead of the next OPEC meeting, which is now just over a week away on June 2, traders may be proceeding with a degree of caution as prices stall ahead of the $50 a barrel hurdle. After the Doha meetings failed to find an agreement on freezing production, this regular OPEC meeting is unlikely to yield a different result, not when Iran continues to re-iterate that it has no intension of capping its oil production or exports. And with the recent cabinet shuffle in Saudi Arabia, the cartel may well continue the Saudi-led policy of flooding the market to drive weaker US shale producers out of the market. The OPEC will no doubt use the supply disruptions in Canada as a reason not to cut production. In short, I don’t expect any changes to be announced at this meeting.

Traders are also wary of a potential slowdown or a halt in US oil production declines, due firstly to the significantly higher prices as compared to earlier this year and also as the Baker Hughes data showed that the number of oil rigs remained steady last week for this first time this year. So, further sharp rises in oil prices may be difficult to achieve with this fundamental backdrop, though I don’t necessarily think oil prices have peaked just yet.

From a technical point of view, the momentum indicator RSI on Brent shows a small negative divergence, suggesting oil prices may need to at least consolidate for a while before they can push higher again. But the overall trend is still bullish as both contracts remain inside their rising channels. For that reason, traders may still see any short-term weakness as opportunity to go long at better levels – until this strategy stops working. In any event, if and when the psychologically-important $50 handle gets taken out, this could lead to further momentum buying pressure. 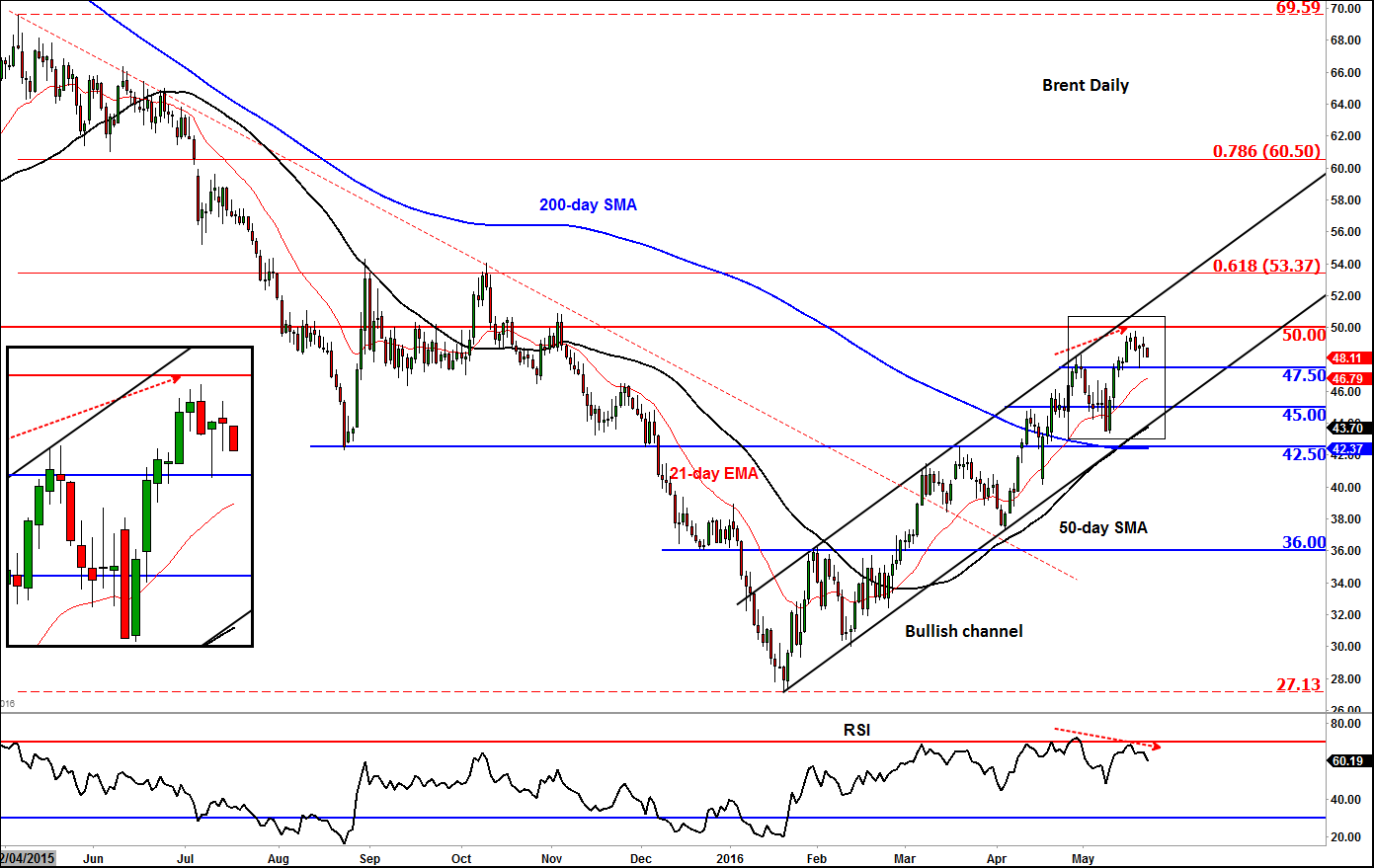 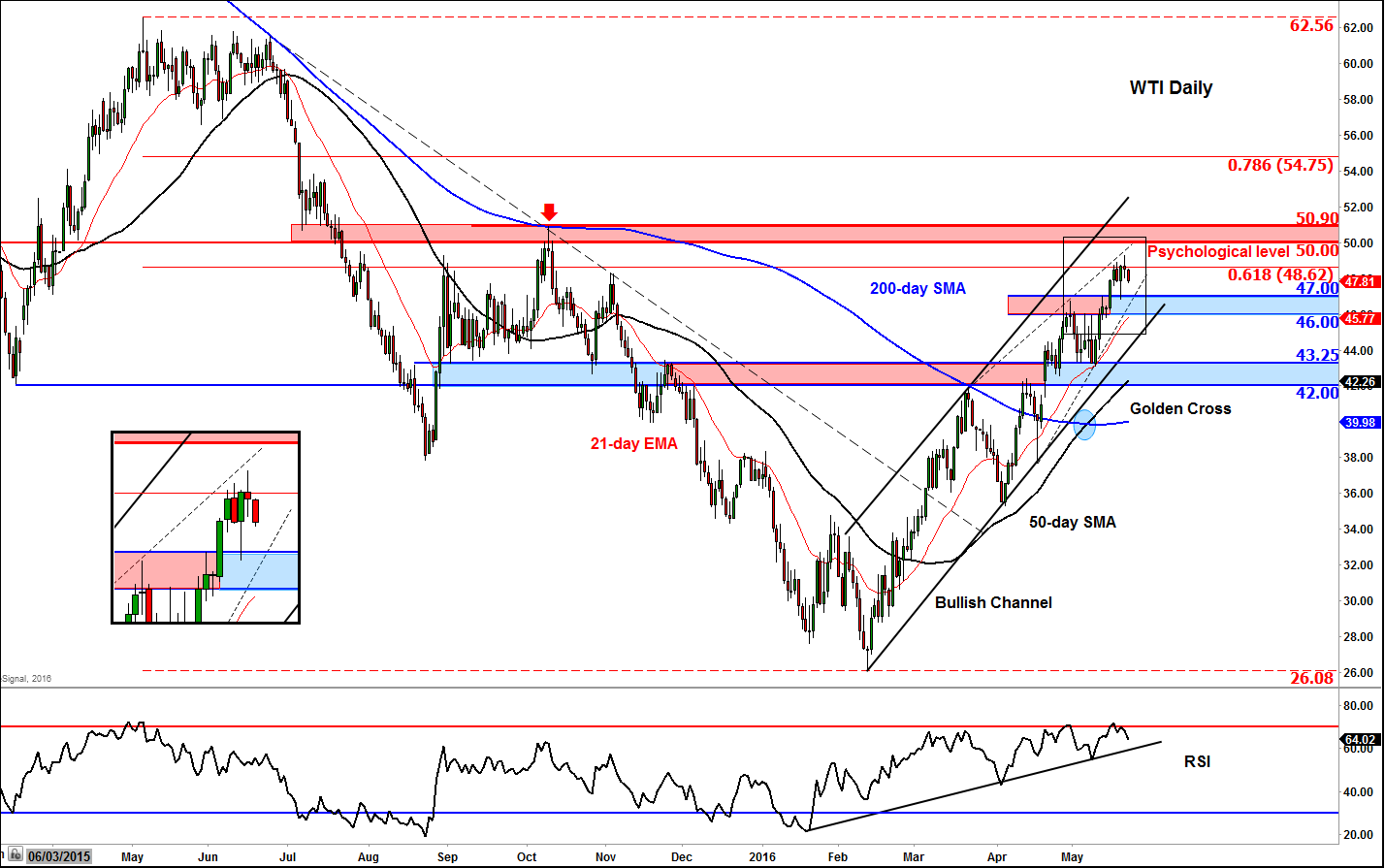