But oil is becoming more and more stable by each passing day. This is mainly due to expectations of a much tighter oil market this year. The deal to limit oil output by the OPEC and some countries outside of this group has been implemented and production has started to fall. According to a survey by Reuters, OPEC members have delivered on about 82% of their deal to lower supply by 1.16 million barrels per day in January. Thus, so far there has been no evidence to suggest the deal will collapse and oil market participants therefore have little reason to expect a collapse in prices.

US production could be key focal point later this year

I think crude prices would have been somewhat higher at this stage had it not been for growing expectations that oil production in the US could soon rise sharply again. So far, these expectations have not impacted oil prices in a meaningful way. Only when US production actually starts to rise noticeably and sustainably may this become the main focal point. But at the moment, it is overshadowed by falling oil production from OPEC and Russia. This may be why oil prices have refused to fall despite that bearish weekly crude oil stockpiles report by the EIA on Wednesday, among other factors.

Meanwhile the US has officially put Iran on notice following what the US government describes as a "provocative ballistic-missile launch.” Iran has apparently said it will continue to test its capabilities in ballistic missiles and that it will not ask any country for permission in defending itself (certainly not the US!), especially since it is not nuclear. How does this impact oil prices? Well, my guess is that it won’t have much of an impact at all – unless the UN reinstates economic sanctions on Iran again, which is very unlikely.

Though oil prices are yet to make new highs for the year, the fact that they have held their own relatively well and have done so near the recent highs continue to point to higher prices going forward. When the charts talk, we need to listen. So far, I don’t see any bearish signs to suggest oil has topped. Quite the contrary, in fact. The slow grind higher is rather bullish. In the case of WTI, until and unless the key support level at $50.90 breaks, the path of least resistance remains firmly to the upside. Short-term supports such as $53.45 and $52.50 need to hold for the current bullish phase to continue. On the upside, resistance at $54.00 needs to break on a daily closing basis soon. Once this condition is met, WTI may then start to move more decisively higher towards $56.55 initially ahead of $58.00 next, and then possibly even $60. It may take a while to get there, but I think oil is more likely to go, say, five bucks higher than lower from here. 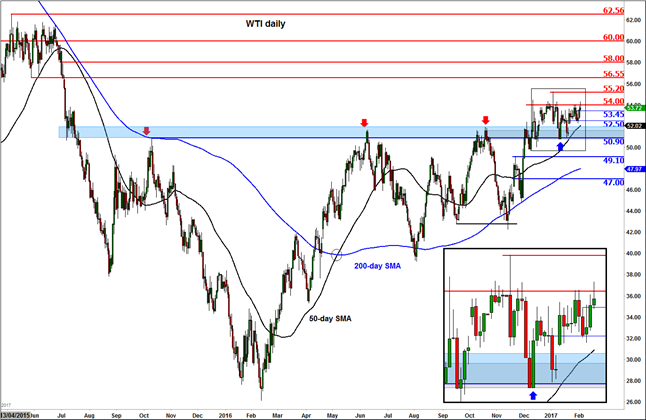