Crude oil could be heading lower in coming months

There is a good chance crude prices could head lower at the start of February. Oil production in the US, which has already been on the rise, could increase further in the coming months.

Although a touch higher today, crude oil prices have given back a good chunk of their recent sharp gains and both Brent and WTI are trading lower three days into the week. Both oil contracts are going to close the month of January higher, however, barring an unexpectedly sharp drop in the next few hours. There is a good chance crude prices could head lower at the start of February. Oil production in the US, which has already been on the rise, could increase further in the coming months. Thanks to higher oil prices, it is becoming profitable for shale producers to ramp up output. The sharp increase in drilling activity certainly points that way. According to Baker Hughes, the oil rig count rose by 12 last week, which was the sharpest increase in months. At a good 759, the oil rig count has now reached its highest level since September. As oil production is likely to increase in the US, crude inventories may rise again. Last week saw stocks of US crude oil rise by a good 6.8 million barrels, according to the Energy Information Administration (EIA). Analysts were expecting a much smaller rise. This however did not have any immediate negative impact on oil prices, because the EIA’s report also showed that stocks of oil products – gasoline and distillates – both fell sharply.  If oil production continues to increase in the US as we expect that it might then the OPEC looks set to lose further ground in terms of market share. This may increase the pressure on the cartel to exit their production agreement with Russia earlier than expected. Thus, oil prices could come under pressure again. But if oil prices have any chance of remaining elevated, the growth in demand for oil needs to outpace that of supply. This is unlikely in our view. Meanwhile, WTI’s inability to hold above the psychologically-important level of $65.00 has potentially created a break in market structure. This level may now turn into resistance upon a re-test. Support at $63.75 is the main line of defence for the bulls now. But if this breaks and prices subsequently fall below the most recent low at $62.87 then there is a possibility for a sharp sell-off as the bulls rush for the exits. The next support comes in at $61.90. 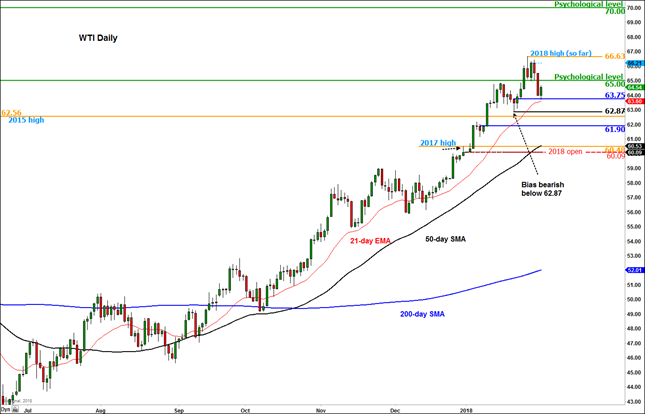