Crude oil prices have dropped sharply today on the back of fresh comments from oil ministers of Iran and Saudi. Just a week ago, hopes were raised for a more significant price recovery after Saudi Arabia, Russia, Qatar and Venezuela proposed an oil output freeze at January’s levels. The agreement was contingent on other large producers participating, including Iran and Iraq. Both countries have recently welcomed the deal but have not said if they will also participate. After presumably careful consideration, the Iranian oil minister came out today and said that OPEC's call for a production freeze is "ridiculous." So, that’s Iran out, apparently. Nevertheless, Saudi Arabia’s oil minister, Ali bin Ibrahim Al-Naimi, is still hopeful a deal will be reached, saying some OPEC and non-OPEC producers will hopefully meet in March to negotiate an output freeze – it remains to be seen how they will agree on anything with Iran rightly not willing to freeze its output. Al-Naimi has reiterated that production cuts will not happen, but added that freezing "is the beginning of a process, and that means if we can get all the major producers to agree not to add additional balance, then this high inventory we have now will probably decline in due time."

But as I have said many times before, if the oil price is going to make a serious comeback, either demand growth has to improve remarkably or US shale oil output falls substantially. While the former looks unlikely, the latter is definitely more probable.  The latest drop in the US rig counts, combined with reports of upcoming shale bankruptcies both point to an imminent drop in US oil production. Indeed, the International Energy Agency (IEA) expects shale production in the US to decrease by 600,000 barrels per day in 2016, as it envisages investment in oil exploration and production to fall by 17 per cent. But even this won’t be enough to completely eradicate the supply glut. According to the IEA, "only in 2017 will we finally see oil supply and demand aligned…" The potential price gains in the interim will therefore be capped because of the "enormous stocks" than have been accumulated in recent years.

Taking everything into account, oil prices may therefore continue to consolidate inside large ranges going forward. But one thing for certain is that bearish speculators are fast running out of reasons to express their views aggressively at these depressed levels. But it remains to be seen if oil prices have hit a bottom yet. The charts of oil have been displaying bullish characterises but so far neither contract has broken above their respective key resistance levels in order to confirm a change in the trend.

WTI has already formed a RSI bullish divergence and a rare three-candle "Morning Star" reversal pattern at the lows earlier this month. Since then, it has been climbing higher, holding consistently above the previous day’s low on a closing basis. However, it hasn’t been able to climb above the recent range high of $34.50. At the time of this writing, WTI was testing the previous day’s low around $31.70 and so there was a possibility it would rebound from there. But if and when it breaks the previous day’s low on a closing basis or forms another type of a reversal pattern then renewed selling pressure could begin. Brent shows similar price behaviour as WTI, only at slightly different levels. For the latter, the key resistance that needs to break is at $36.00.  So for now, consolidation and choppy price action remains the dominant trend. 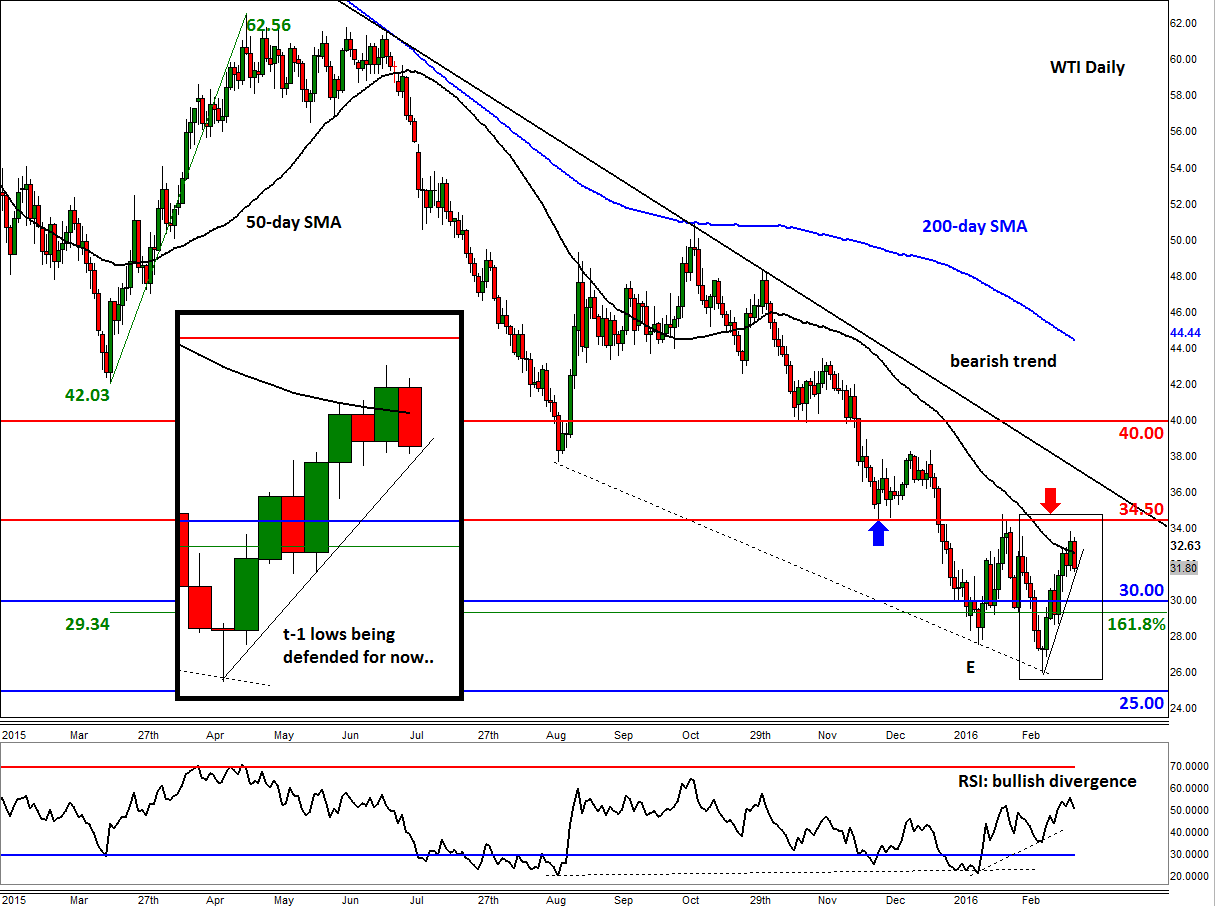