A surprisingly high level of U.S. crude oil inventory reported on Wednesday by the Energy Information Administration (EIA) has led to a pullback in recently recovering oil prices. According to the EIA, crude oil stockpiles shot up by 9.4 million barrels last week, far surpassing the 2.5-million-barrel build that was previously expected. Oil prices continued to be pressured early on Thursday as it remained clear that the global oversupply situation would not be so easily addressed, despite continuing speculation over a proposed cooperation among major oil-producing nations to coordinate a production limit. Also weighing on oil prices on Thursday was continuing strength in the US dollar, which has been surging this week due to a more hawkish stance from the Federal Reserve as communicated by several key Fed officials.

As oversupply conditions continue to plague crude oil markets and the dollar remains relatively well-supported due to ongoing anticipation of more Fed rate hikes, downside risk for oil prices persists. This risk lingers despite the sharp rally and recovery from multi-year lows that has occurred within the past two months. This recovery has been built on little more than speculation over the noted proposal among OPEC nations and Russia to coordinate a production limit. Furthermore, it should be kept in mind that even if these talks successfully produce an agreement, there are no assurances that simply instituting a crude oil output cap near record high production levels would do much to alleviate the enduring oversupply situation.

From a technical perspective, the Brent Crude benchmark has been in a moderate pullback since it reached a new three-month high around the 42.00 resistance level late last week. That 42.00 level is a highly significant support/resistance area, and it is also currently reinforced by the presence of the key 200-day moving average. Prior to reaching that level, Brent had broken out above a major downtrend channel extending back to last year’s 70.00-area high. While that channel breakout in early March was a significant bullish event, the noted 42.00 resistance level continued to loom as a potential barrier to further gains. Currently, this 42.00 level remains as the key technical level to watch for Brent Crude. With sustained weakness under this level, crude oil prices could continue to be pressured, with the next major price target around the key 36.00 support objective. To the upside, it should be noted that Brent has not traded above its 200-day moving average since mid-2014. Therefore, as this moving average is currently situated immediately to the upside, it should serve as a very significant resistance factor, as it just did within the past week. In the event that a rebound and further rally have the strength to break out above this resistance, however, bullish momentum could potentially push Brent up to the key 46.00 resistance level. 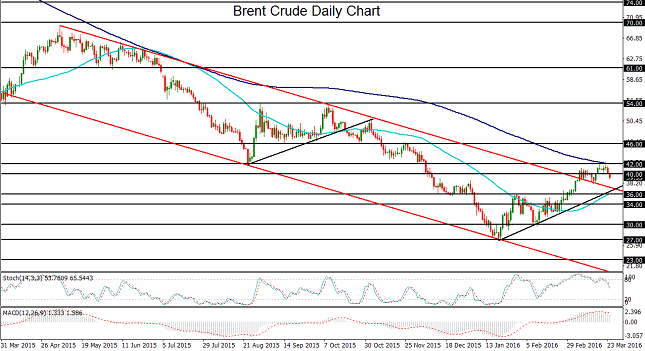