Crude Oil: Lots of Wading Around

For now, prices are moving on the headlines of supply and demand.

In the oil market week ahead on Friday, my colleague Matt wrote about the Saudi takers making their way to the United States.   These takers are filled with 40 million barrels of oil.  Currently, these takers are anchored of the coast of  California.  There are enough tankers anchored that The United States Coast Guard felt the need to tweet out that they are “closely monitoring the increased presence of tanker vessels anchored off the coast of Southern California.”  Indeed, many  OPEC+ countries are attempting to pump as much oil as possible before the recently agreed production cut kicks in on May 1st.  However, how much is too much?

As of the time of this writing, June Light Crude Futures are down nearly 26% at $12.57.  The June contract is currently the “Front month” contract.  In other words, the front month is the closest contract to expiration and is often referred to as the spot month.   So, when people are trading oil, whether it is spot or CFDs, it is often best to look at the front month futures contract in order to get a sense of direction.

A 240-minute June WTI Light Crude Oil Futures contract shows the fall last week as the March contract went into expiration.  The June contract is charted from expiration onwards and the price difference is clear.  However, note that the June contract is trading lower, reflecting the increase supply and the expected low demand as we move towards expiration.  The June contract put in a low on June on April 21th at $6.50 and $10.26 on April.  These are our first support levels ahead of the psychological level of $0.  First resistance is at recent highs of $18.26, then contract highs at $22.46 and finally $29.13 which was the most recent high from the May contract on April 3rd. 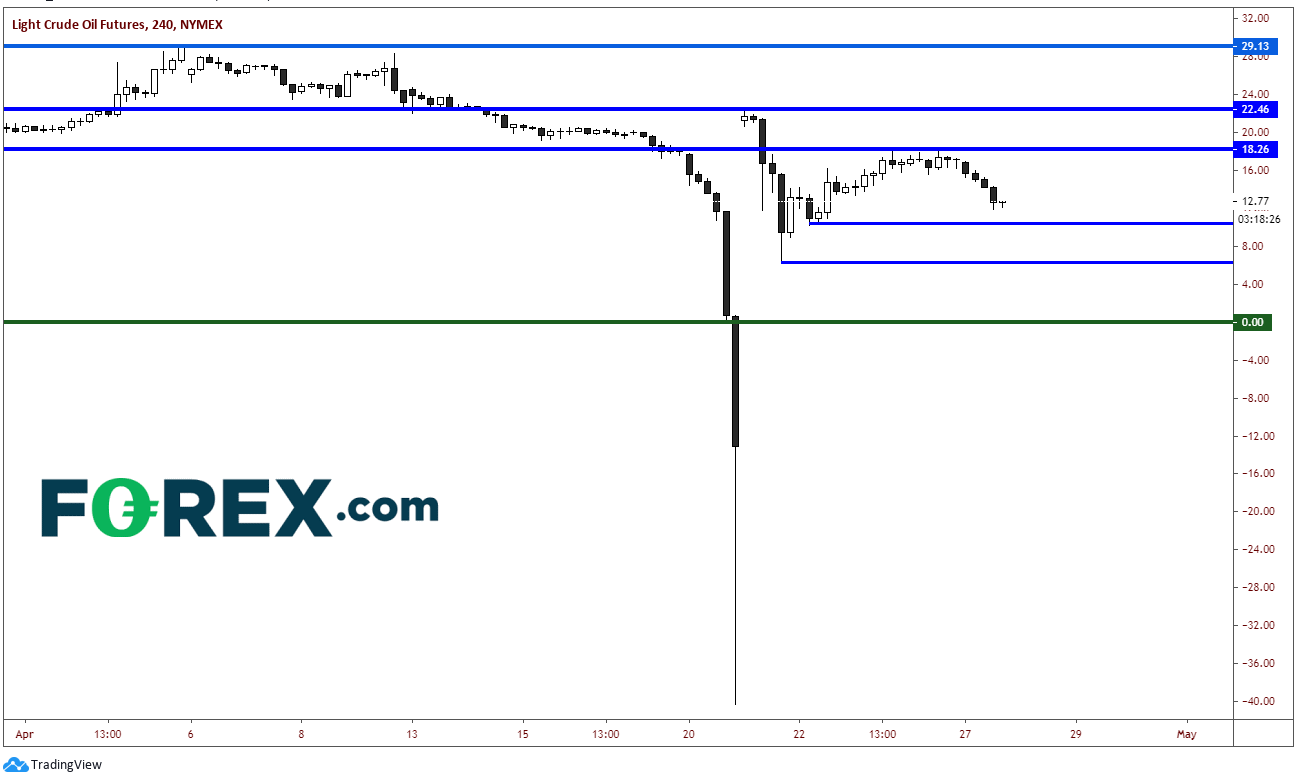 As time moves on, these levels will act as better support and resistance  if they are held.  For now, prices are moving on the headlines of supply and demand.  We have earnings big oil companies this week, such as BP and XOM.  Their guidance will be important to watch.  In addition, API crude inventories and EIA crude inventories will also be important in determining how much supply is available.

**One more thing to note is that as June expiration gets closer, don’t except the same price action as we had in the May contract.  Traders will surely roll to the July contract sooner before liquidity thins out or there is a large premium to roll from the June contract.