The effort by the OPEC+ to rebalance the market may only have limited impact on prices, due to the still-rising US oil output.

The big 20% drop in oil prices in just over a month – triggered due to the sudden realisation by investors that the crude oil market had been excessively oversupplied – had clearly worried the OPEC+, whose representatives met in Abu Dhabi over the weekend. The cartel’s de facto leader, Saudi Arabia, announced a 500,000 barrel per day cut in December supplies, while other oil producers also considered reductions in supply heading into next year. Saudi’s oil minister, Al-Falih, later declared that oil ministers from OPEC+ agreed that they must do “whatever it takes” to balance the market, and that production needed to be cut by 1 million barrels per day from the October levels. But the effort by the OPEC+ to rebalance the market may only have limited impact on prices, due to the still-rising US oil output. For now, though, oil prices have found some much-needed support after gapping sharply higher at the Asian open overnight following the weekend news. Though prices have since eased back, along with equity indices, at the time of writing they were still well above their closing levels from Friday.

The recent sell-off in oil prices has been a swift one. Brent prices reached north of $86 in early October but by last Friday they were back down to $69 a barrel. This $17 or nearly 20% slide was the sort of a drop we were continually warning about when prices started to move higher months ago in the face of rising crude supplies. The game has changed. Every time prices go up sharply, oil producers increase production. With rising prices, it becomes profitable to pump more of the black stuff and sell each barrel for a higher price than sell more barrels to achieve the same revenue at lower prices.

Although the OPEC has joined forces with Russia to basically collude on production, the latter ramped up its production to a record level while OPEC’s largest producer, Saudi, also increased its supplies sharply in recent months. This was due in part to pressure on Saudi government from US President Donald Trump to lower oil prices, but also to offset a potential supply shock as the US re-imposed economic sanction on Iran. But with Tehran exempt from selling oil to some of its largest customers, the initial supply shock concerns have never materialised. As a result, more oil was being produced than needed, especially in light of demand concerns with many emerging markets suffering simultaneous currency crises.

Another big reason behind the price slide has been the surge in US crude oil output, which has showed no signs of abating. Here, energy companies, looking for new reserves, added an additional 12 rigs in the week to November 9, according to Baker Hughes. The total rig count now stands at 886, its highest level since March 2015. The rising rig count indicates that US oil supply, already at a record 11.6 million barrel per day, is likely to increase further in the months ahead. This may keep the potential gains in check on oil prices.

From a technical point of view, the fact Brent has bounced at around $69.20 comes as no surprise as this level was the 2015 high and therefore a long-term broken resistance, which has now turned into support. But this does not necessarily mean prices have bottomed, as it could turn out to be a mere dead-cat bounce. We would turn more optimistic on oil prices if and when Brent breaks above a previous high to create a higher high. The most recent high comes in at $73.55, so a break above this level would be bullish, in our view, as things stand. But if prices continue to drift lower and subsequently break that long-term support around $69.20 then in this case, the sell-off could extend towards the next potential support at $66.50, or even the lower $60s towards the long-term bullish trend line, derived from connecting the 2016 and 2017 low points. 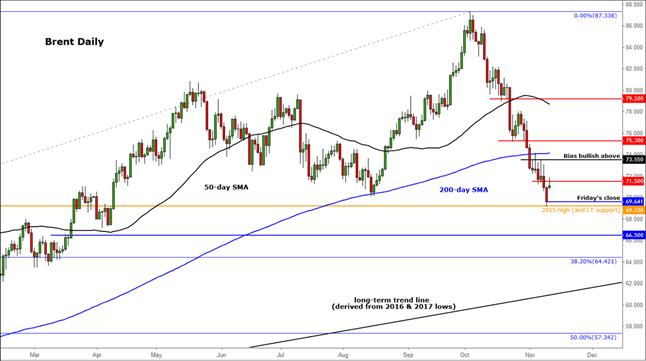