Share:
The West Texas Intermediate (WTI) benchmark for US crude oil prices surged on Wednesday after the Energy Information Administration (EIA) reported that US commercial crude inventories fell by 553,000 barrels last week. The markets had been expecting a substantial build in stockpiles, particularly after Tuesday’s report from the American Petroleum Institute (API), which had reported a much higher-than-expected build last week of 4.8 million barrels. The EIA’s report of a surprise draw last week follows a much larger draw of 5.2 million barrels in the previous week. As a result of Wednesday’s report, WTI initially surged, recovering the losses it had suffered immediately prior to the data release.

Crude oil quickly pared its gains, however, as the reality of the global oversupply situation continues to weigh on prices worldwide. Much of what has driven the rise in crude oil prices in recent weeks has not been so much about US production and inventories. Rather, it has been, and continues to be, predominantly about the Organization of the Petroleum Exporting Countries (OPEC) and how this loose intergovernmental coalition plans on helping to stabilize prices.

Last month, reports surfaced that OPEC members, most notably Saudi Arabia, had struck a deal at a conference in Algeria to coordinate a cut in oil production. This news led to optimism that global supply could realistically be reined in, and crude prices could continue to recover. It quickly became apparent, however, that in order for this deal to work, OPEC would not only need full support by its many members, but also that of non-OPEC oil producers. While Russia has said previously that it would be willing to join the deal, Iraq, OPEC’s second largest producer, has recently expressed its wish NOT to participate. This could set the stage for the deal to begin falling apart even before the November OPEC meeting in Vienna, when the group has said it would begin the process of implementing the agreement.

While such a deal could eventually garner enough support to stabilize crude oil prices, the short-term outlook does not look overly optimistic. If the current deal does indeed fall apart, crude oil could see a sharp plunge. Until then, doubts about the deal continue to plague both WTI as well as Brent Crude.

As for WTI, the past week has seen a significant pullback from its recent highs above $51 as these doubts have intensified. The current chart is showing a potential rounding top pattern, which could be viewed as a possible downside reversal formation. In the event that pressure continues to build, especially in the run up to OPEC’s November meeting, key downside targets for WTI are currently seen around the $45 and $43 support levels. 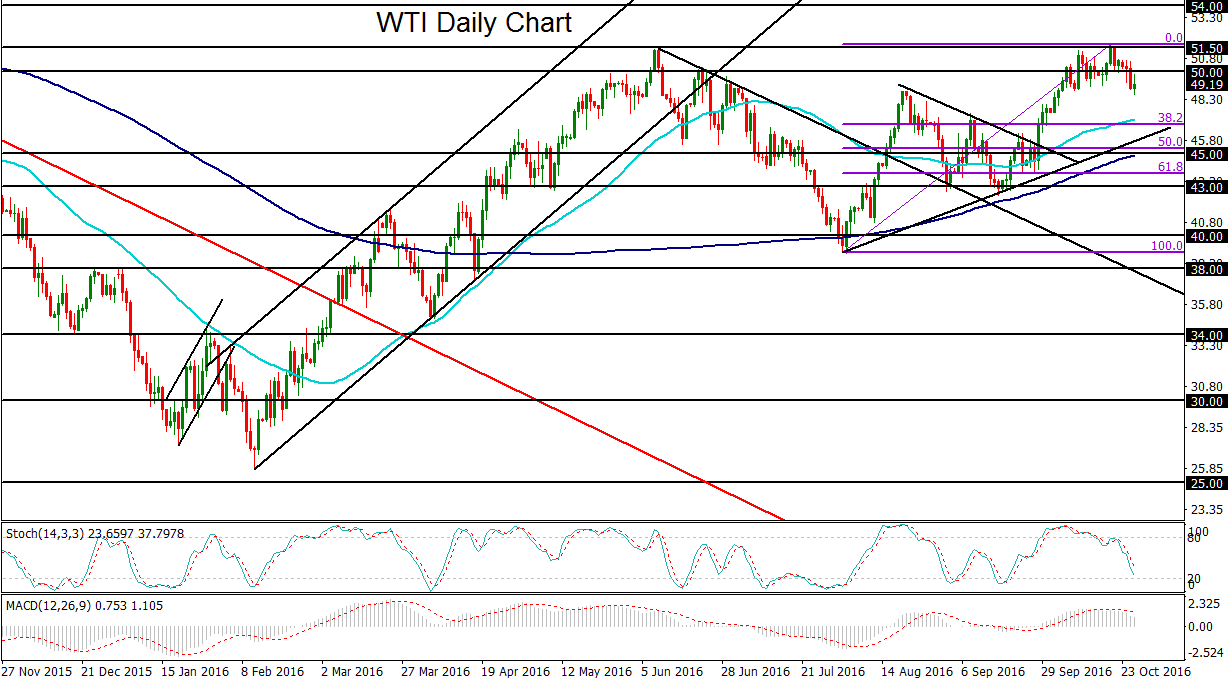