<p>Since late last week, the decline in Brexit concerns due to new polls showing resurgent momentum for the Remain camp has had significant consequences for financial markets. A new-found perception of lower risk ahead of this week’s EU referendum in the UK has led to a sharp relief rally for the previously pressured British pound as well as weaker performance for traditional safe haven assets like gold, yen, the US dollar, and Swiss franc.</p>

Since late last week, the decline in Brexit concerns due to new polls showing resurgent momentum for the Remain camp has had significant consequences for financial markets. A new-found perception of lower risk ahead of this week’s EU referendum in the UK has led to a sharp relief rally for the previously pressured British pound as well as weaker performance for traditional safe haven assets like gold, yen, the US dollar, and Swiss franc.

In turn, this has increased appetite for riskier assets including equities and crude oil. In the case of oil, a risk-on market environment coupled with a sharp drop for the dollar has helped to boost crude prices for the second consecutive day after the previous week saw a substantial pullback.

For the international crude oil benchmark, Brent crude, this price action has been displayed as a sharp drop and then a rebound off a key uptrend support line last week. This trend line forms a part of a major parallel uptrend channel that extends back to the January lows below $27.

As of Monday, Brent crude has extended last week’s rebound, reaching back above the key $50 level. From a technical perspective, therefore, the five-month bullish trend has been effectively salvaged for the time being. With the UK’s EU referendum only a few days away, however, the near-term directional bias for crude oil could be significantly affected by the outcome of the vote, along with other major financial markets. Of course, oil prices will also be largely dependent upon supply fluctuations and disruptions as have contributed to the rise in prices for the past several months.

While Brent’s uptrend currently remains intact, key fundamental and technical resistance should pose a formidable barrier to much further appreciation, at least in the short-term. Even if price reaches above June’s year-to-date high around $52.50, major resistance resides just above at the $54 price level, which has served to halt Brent’s rise since August of last year. To the downside, any breakdown below the noted parallel uptrend channel could open the way for significantly further losses towards the key $42 support level. 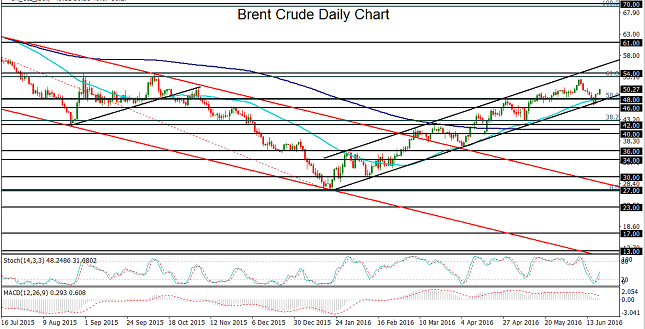