The official weekly crude oil inventories report from the US Energy Information Administration (EIA), released this afternoon, has confounded expectations in a positive way and oil prices have correspondingly surged to their best levels since early July. Meanwhile it is a game of wait-and-see as far the dollar is concerned and by extension buck-denominated gold, with traders largely sitting on their hands ahead of the release of the FOMC minutes later on today.

The official weekly crude oil inventories report from the US Energy Information Administration (EIA), released this afternoon, has confounded expectations in a positive way and oil prices have correspondingly surged to their best levels since early July.

Following the EIA oil report, WTI jumped to a high so far of $46.70 and Brent closed in on $50 and was trading just below this psychological hurdle at the time of this writing.

Oil prices have so far shrugged off a report form Reuters that Saudi Arabia is looking to increase its oil output to a new record level in August. If this were to be the case then it would be logical to expect oil prices to find some resistance on concerns over excessive supply. But another way to see it is this: the fact that Saudi Arabia is able to sell so much oil goes to shows that demand is extremely strong. Several oil agencies think that oil market will be at least balanced by mid next year and so there is scope for prices to rise north of $50 again.

I am of the view that oil will be trading in the range between $45 to about $65 in this second half of 2016, but that if it gets nearer to the top of this range then US shale producers will likely respond by pumping more oil once again. That should limit the potential gains. However, it is not as simple as that as there are more variables at work, including, but not limited to, the US dollar, risk sentiment and so on.

A word or two on gold

It is a game of wait-and-see as far the dollar is concerned and by extension buck-denominated gold, with traders largely sitting on their hands ahead of the release of the FOMC minutes later on today. It appears as though bullish traders have shown little interest in buying the perceived safe-haven metal, even though the equity markets have weakened over the past couple of days. So, the metal could drop sharply if stocks now rebound and the Fed minutes convey a hawkish message.

You may recall from my article last Wednesday in which I opined that the long-term outlook on oil was bullish. When I wrote that article, WTI oil was actually falling quite sharply on the day but it was heading into strong support around the $41/$42 area. Taking a closer look on the daily and we can see that WTI formed a large bullish engulfing candle by the very next day. That effectively invalidated the bearish argument, leading to a sharp short-squeeze rally in the ensuing days. Now, oil has reached the prior resistance and 61.8% Fibonacci retracement level against the high from earlier in the year around the $46.75-$46.90 range. While WTI could once again find some resistance here, a potential break above this resistance zone would be deemed a further bullish outcome which could then lead to a push towards the next potential resistance levels at $48.20, $49.00 and then $50.00.

Meanwhile, Brent’s daily chart shows a breakout from its long-term bullish flag pattern, which is obviously bullish if we ignore everything else. The London-based oil contract had recently found strong support from its 200-day moving average which also happened to reside around the 38.2% Fibonacci retracement level and prior support and resistance level of $42.50. Brent had dropped off some 20% from its recent highs to get there, which meant that it was in the official bear territory. However to put thing into perspective, it had gained nearly 95% from this year’s multi-year low to its high of just under $53 at the start of the summer. So a drop of 20% when looked at this way is a shallow pullback. Why am I banging on about this? Well, if Brent oil now goes on to achieve a new high for the year, the relatively shallow pullback would strongly point to a significant continuation higher. But that’s a worry for another day. Brent must first clear its short-term resistance area in the $50.00-$50.85 range. 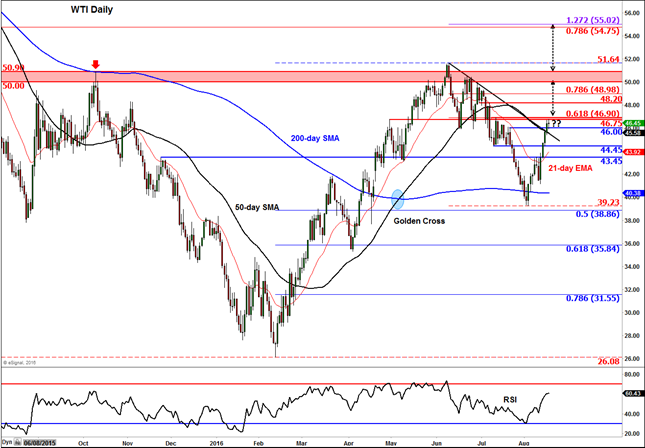 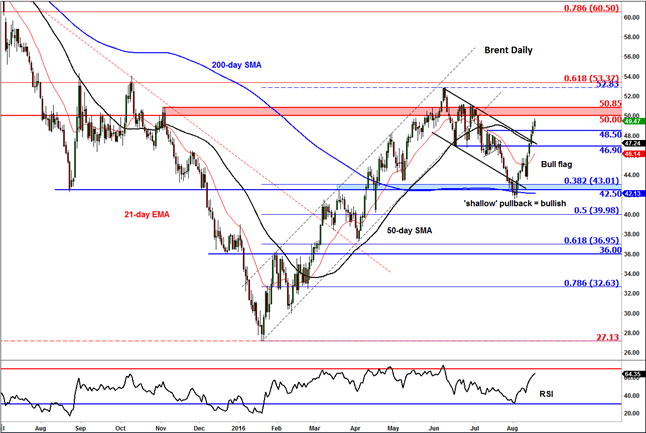